Stunning: The photo above shows a rainbow appearing over the Freedom Tower in New York City on Thursday, - one day before the 14th anniversary of the Sept. 11 terror attacks

On the eve of the 14th anniversary of the Sept. 11 terror attacks, stunning photos show a rainbow appearing to originate from the World Trade Center in New York City on Thursday.

Ben Sturner, the CEO of sports marketing company Leverage Agency, has an unobstructed view of the Manhattan skyline including the World Trade Center, from across the East River.

On Thursday morning, Sturner stepped outside of his apartment in Long Island City, Queens and onto the terrace to check the weather as part of his daily routine.

The sight that he saw while standing outside just after 7:00am was nothing short of magical and stunning.

You never know how strong you are until being strong is the only choice you have.
Report Inappropriate Content
Message 51 of 82 (386 Views)
Reply
2 Hearts
dmod nj
Honored Contributor

You can take the girl out of Jersey, but you can't take Jersey out of the girl. Jersey Girl living in CNY.
Report Inappropriate Content
Message 52 of 82 (373 Views)
Reply
3 Hearts
Nuttmeg
Esteemed Contributor

We Will Always Remember. 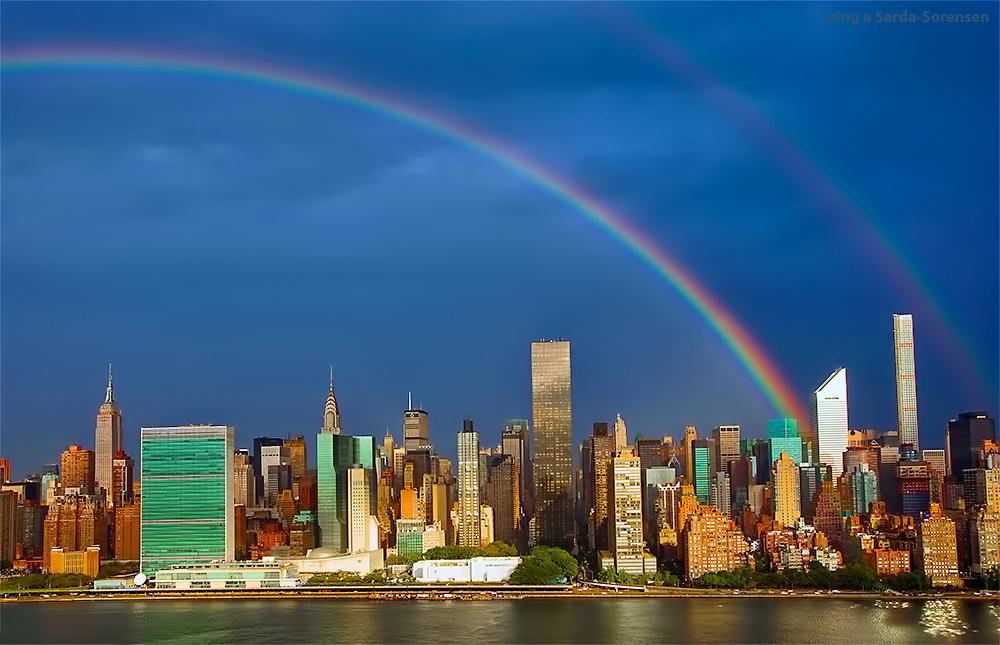 Thank you for sharing the link to Red Skelton.  Red Skelton was truly one of a kind.  I remember him from when I was very little.  Such a sincere, gentle man who had a way of getting his point across without getting in your face about it.

My baby had not yet turned 3 and I plopped him in front of a TV turned to PBS (who thankfully still ran children's programming that day) so I could watch the tragedy unfold in our bedroom.

Oddly, we had library books due that day and my focus became getting our books back to the library on time because I didn't know what our future held in the coming days.

Looking back, it was such a weird concern, but I guess I felt like I had to get my business done, no matter how mundane.

Yes, I remember well that day-- gorgeous blue sky day and I had the local cable news on here-- said a plane had crashed into the trade center. Now some of you know but DH, worked across the street at the World Financial Center (WFC). I saw the hole in the building and switched to NBC's Today show. I called his office to find out if he had arrived yet; woman who answered the phone told me they are doing a head count and then they are evacuating the building! Meanwhile I had 3 kids in 3 different schools-- one in HS, one in middle school and I just saw the bus pick up the youngest for elementary school.

I didn't know where DH was for about 45 minutes. He arrived in time after he got out of the subway to see the 2nd tower get hit (I watched it live on TV). Cell phone towers down and the TV stations had problems staying on TV once the tower fell with the large antenna on top. I spent the morning listening to CBS NewsRadio while I ran errands. I was in my car when I heard the announcer say the 1st tower had collapsed. I had just left Genovese Pharmacy for an RX and I was in the car on the road and I had to pull over and I cried.
Finally got home and DH called me to ask me to contact his mother who I am certain was frantic as both her boys were in that area that day. My BIL got covered in soot as the wind was blowing towards Brooklyn and he was down there to go to a court date.

DH decided to remain in town near Penn Station for a good part of the day (tunnels had to be inspected before any trains could be allowed to travel through them). He finally got home around 3:30PM.

I think the worst part was going to the various schools to update the kids as to where their Dad was. Now this was in the days of maybe one person having a cell phone and everyone who was a teenager was walking around with a Walkman radio. The HS said I could take him out of class if I needed to, but our eldest son asked me why I took so long to let him know where Dad was. I told him I waited till I knew he was safe before I went over.

I went after that to the middle school and there they told me the same thing-- he could come home with me, no questions asked. No, I said I just want to let him know his Dad is okay. Now, at the middle school the teachers all knew what was going on but kept it from their students. I had called our middle son out of an English class and told him that the World Trade Center is no more (we had visited it a few years beforehand) and that two planes hit the towers. Dad was okay and safe. Middle son quickly left the main office and the staff asked me if I was alright. Middle son later told me, he stayed in the hallway and cried before heading back to class.

At that point, the 3rd grader was not told until he came in from school what happened that day. The administration didn't tell the kids anything as they got to younger and younger ages. Now when I think about it, the eldest is 30, middle son is 27 and the youngest is 21.

It was a very rough time for all of us. DH's office had to move to the Marriott Marquis (in midtown NYC) and get set up there in hotel rooms for about 9 months (phone lines, staffing etc.).

Fortunately DH's computer was locked in his desk; others were not so lucky-- their computers were removed from their desks (DH thinks a few of the first responders took them since no one else was allowed into the building post 9-11). Anyway, it was an awful time here.
One thing we noticed too the days after, the silence and just the birds singing in the sky-- no planes flying either here (we were not in a flight path) but of course could hear them those planes previously.

I do remember hearing the jet fighters as they came around to go back towards NYC on 9-11. You do not mistake that sound for anything else but a jet fighter. Unfortunately scrambled too late.

In the days after that attack, all I could think about was, 'they used our technology against us!' I think I went into a slight depression and I could see that DH was having an alcoholic beverage at dinner every night. I worried about him because to this day, he doesn't talk about it and I know from seeing photos of the area where it happened there is no mistaking he didn't see people falling out of the sky. He just won't acknowledge it.
We have some photos which were taken by one of his co workers who he ran into on the street and managed to get one of the last disposable cameras in his hands from one of the shops downtown.

He remembers the constant sounds of sirens going off too. Fortunately when the 1st tower fell, he was at around 14th Street so he didn't get hit with any of the dust debris. He walked up to 33rd Street where Penn Station is located and found a bar to wait it out. He did manage to get one of the first trains out of NYC to home once the all clear was given to the tunnels.

A neighbor of mine managed to hitch a ride on the back of a pick up truck heading back to LI (a woman who was in a skirt and heels working in the cosmetics industry). She didn't get home until about 7PM. Bridges were shut down, no taxis to be found or were 'on duty'. Hotels also were booked for those who decided to stay in NYC until it was all clear to go home.

DH had been in midtown when the 1st bombing in '93 happened. Their offices were on the 101st floor of one of the towers. At that point, after that bombing, the company decided to end their lease and lease across the street at the WFC rather than be in the biggest target on earth.

Only one person of his company was lost that day-- who happened to be in the NYSTax Department for a meeting.

Sadly, he knew a few who did die from that NYS Tax Department (they had their offices there in the WTC).

The week before, he had been at a breakfast meeting at Windows of the World that Thursday before. It brings shivers to me because of what happened there to those trapped there.
☼The best place to seek God is in a garden. You can dig for him there. GBShaw☼
Report Inappropriate Content
Message 58 of 82 (323 Views)
Reply
6 Hearts
IamMrsG
Respected Contributor

@Heart of Spade   I imagine you were struggling for a sense of normalcy.

My thoughts and prayers continue to be with everyone who lost their loved ones in PA, NYC, and DC. They will forever be affected by this terrible tragedy. I also salute all of those heroes who stepped in to help during and afterwards.

I was recuperating from spine surgery and saw the entire thing on tv, and I was shocked and deeply saddened that day. I continue to feel this way 14 years later.

And in the end, the love you take is equal to the love you make~ The Beatles
Report Inappropriate Content
Message 60 of 82 (315 Views)
Reply
2 Hearts