Auto-suggest helps you quickly narrow down your search results by suggesting possible matches as you type.
Showing results for
Search instead for
Do you mean
Reply
Topic Options
Highlighted
snoop
Respected Contributor

One confirmed case in Washington and possible case in Los Angeles and Texas.  Nj had a suspected case that was cleared.

Wuhan will follow Beijing's SARS treatment model to build a special hospital planned to accommodate 1,000 beds. It will be put into use by Feb. 3rd. 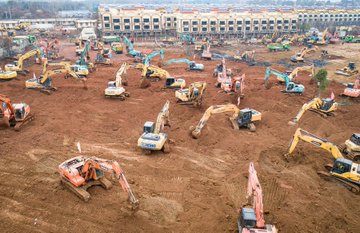 The rapid construction project is a reaction to the unraveling situation in the central Chinese city, which has been closed off from the outside. Hospitals are running out of beds and medical supplies, while patients presenting with coronavirus symptoms have been turned away. The situation has led to growing criticism for the slow reaction to the crisis by authorities in Wuhan and in Beijing.

While the incredibly tight deadline may seem impossible to meet, the project follows a similarly rapid build during the SARS outbreak in 2003. Then, a team of 7,000 workers in Beijing built the 1000-bed Xiaotangshan hospital in just a week.

The South China Morning Post reported that hundreds of workers have already begun working on the site with locals saying they are being paid 1,200 yuan ($173) per day, three times their normal rate.

The virus has now killed 26 people and infected 830 worldwide.

i'm glad our CDC took this seriously immediately as best it could.hospitals are preparing protocols. but  WHO may be behind the curve - although i hope that containment to China is the case.

“This is an emergency in China, but it is not yet a global health emergency,” said WHO Director-General Tedros Adhanom Ghebreyesus at a news conference, describing the conclusions of the organization's emergency panel, which had a near 50-50 split vote on the decision. "It may yet become one."

I'm so scared :-( I hate this stuff. Have they stopped travel from those areas? LIke can people still come to the US from these areas? Gosh, I hope not. This is beyond scary.

@BrandiDavis @They are screening people at our international airports for fever or signs of illness but have not stopped travelers from entering.

Health officials in the state of Illinois announced the second case of coronavirus in the US, located in the city of Chicago, CBS Chicago reported.

The patient is a woman in her 60s, who had travelled to Wuhan in December.

The woman returned from China on January 13 without initially showing any signs of illness, but a few days later, she called her doctor to report feeling sick.

Dr. Nancy Messonnier, of the CDC, said at a news conference in Chicago on Friday that there were now a total of 63 patients under investigation in 22 U.S. states for possible infection with the Novel Coronavirus 2019, which originated in China.

She said there had thus far been 11 negative tests and two positive, including the Chicago woman confirmed to have the disease on Friday and the man in Seattle who was confirmed as a case earlier this week.

Messonnier said there would likely be "many more" suspected cases in the coming days, but stressed the risk to the general U.S. public was still considered low.

She said the CDC was continuing its enhanced screening of passengers arriving from China at five U.S. airports and would continue to evaluate the duration of those measures.

The screening is imperfect.

The screening is imperfect.

It is imperfect by nature, @snoop, since one can be incubating the virus before showing any symptoms.

I think that the danger is very low for us here.

I read that 616 people have been diagnosed with this particular coronavirus and 25 have died. That's about 4%.

You have more chance of being killed in a vehicle accident.

I read that 616 people have been diagnosed with this particular coronavirus and 25 have died. That's about 4%.

You have more chance of being killed in a vehicle accident.

And add to that the fact that we are in the US, @Sushismom


~Who in the world am I? Ah, that's the great puzzle~ Lewis Carroll, Alice in Wonderland
Report Inappropriate Content
Message 30 of 47 (296 Views)
Reply
1 Heart