Auto-suggest helps you quickly narrow down your search results by suggesting possible matches as you type.
Showing results for
Search instead for
Do you mean
Reply
Topic Options
Highlighted
Qwalker
Esteemed Contributor

Don't use baking soda but have a suggestion for garlic salt. Use it on your roasted veggies if you don't have fresh garlic.

Add to pan & sauté til tender:

1 cup tomato juice from can

Add ground beef back to pan. Stir together.

Cover and cook until liquid is almost all absorbed.

Mixture should be moist when rice is done. About 20 -30 mins.

Left over tomato juice or water can be added if needed

Next Ingredient: Bratwurst (and I just bought loose bratwurst meat (not in the casings) and I don't have a clue what to do with it except make patties so if anyone else has a recipe I would appreciate it!

I don't usually post a recipe I haven't cooked or eaten, but this sounds delicious. Brown the bratwurst like you would ground beef instead of dicing one in the casing. Read the entire recipe. You get 2 for 1.

1 package (5 links) Bratwurst, cooked and diced.
1 stick of butter
3-4 Tbsp. All Purpose Flour (I don't measure, but it needs to be enough that it forms a glue-like consistency when added to the butter.)
2 tsp. or so garlic salt
Pepper to taste
1 12 oz. bottle of lighter beer, such as Budweiser (Darker beers are delicious to drink while making this, but can overpower everything else if used in the recipe. Stick to the cheap-ish stuff. )
1 8 oz. package of cream cheese, cut into chunks
1 1/2 C fat free half and half (you can use regular, but the fat free is just as good, and saves a few calories.)
1 lb. PLUS 1 C. Extra Sharp Cheddar Cheese, hand shredded (pre-shredded leaves this a totally different, weird consistency because of the non-clumping stuff "they" add to it.)
1 lb. small shell or elbow pasta, cooked until all the way done (not al dente) and drained.
Salt and pepper, to taste

Cook and dice the bratwurst. Set aside in a bowl lined with paper towels, to drain.
In a large skillet melt the butter, then add the AP flour and cook until well combined, and the consistency of runny-ish glue. Stir in garlic salt and pepper.

Whisk in the bottle of beer. Keep stirring until well combined, and hot.

Whisk in the cream cheese, until melted and combined.

Whisk in the half and half.

When the mixture starts to thicken a bit, start adding the shredded cheese, small handfuls at a time, until combined well, and the cheese isn't stringy anymore, but a thick sauce.

(Now you could stop here, and you'll have the absolute best beer cheese dip for soft preztels or those amazing pretzel rolls from Costco. Perfect for those who like to watch sports in groups, which I don't. Or for movie nights or TV show marathons with a group of friends, which I do happen to love!)

Add the diced bratwurst, then combine with pasta. Taste test and any more salt and pepper, only if needed.

. . . and also thanks to you and Walker for keeping this thread going. I am not much of a cook (as a matter of fact the majority of the recipes I make have come from this board) so I can't participate as much as I would like. Thanks to all of you that are so generous with their recipes!

Cabbage Soup With Apples and Thyme

Next Ingredient: Ground turkey (or chicken) 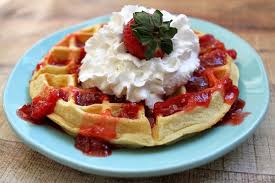 In a medium-sized bowl, combine strawberries with the 1/2 cup of sugar and orange liqueur. Let it sit while you make the shortcakes. Mash some of the berries to make ‘juice’ on the berries to soak into the waffle, yum. Let set 15 minutes to sweeten.

Make Belgium waffles in your waffle iron. Cook 'til crisp. Pour sweeten strawberries on top of waffle and top with whipped cream.

Top with a whole berry just for looks! They were skimpy with the strawberries in this picture, I'm not!

9 hard boiled eggs peeled whites chopped and 3 yolks crumbled. Save the rest of the yolks for another use

1/3 cup mayo plus more for spreading

coarse salt and fresh ground pepper to your taste

Mix whites, yolks, mayo, celery, and mustard and curry if desired. Season with the salt and pepper. Spread the rest of the mayo on the 4 slices of bread top with the radicchio, and egg salad. Sandwich with the remaining bread.

This is Alexis Stewarts recipe from Martha Stewart Living Magazine.

Peanut Butter or any nut butter