Auto-suggest helps you quickly narrow down your search results by suggesting possible matches as you type.
Showing results for
Search instead for
Do you mean
Reply
Topic Options
BornToShop
Respected Contributor

This was on ITKWD today.  Any thoughts about this or any suggestions for other options?

I prefer an air popper and this one looks good, but you can get this model at Home Depot for $17.85.

I like to make popcorn in the microwave; I don't use oil, but most microwave poppers today allow it.  Sometimes, I spray the popped corn with I Can't Believe It's Not Butter spray.

This Cuisinart model is $12.99 at Target and has good reviews:

I totally agree with @ValuSkr . We have a silicone microwave popper but I use olive oil. It tastes nothing like bagged microwave popcorn, very light and delicious 🍿.

I have had that type of popcorn popper for years, I use it several times a week and love it.

@BornToShop   The only thing I noticed about the popper was how noisy it was. You could hear the dry kernels banging all over the inside of the machine.  Would drive me nuts.

I use a silicone air popper too.  I can't believe any air popper would be originally priced at $33 in the first place and this is just a regular price not really a sale. I love the silicone one because it flattens and stores easily and doesn't take up much room.

If you're comfortable shopping in stores, or even doing curbside pickups, you can find that style of popper many places. And yes, usually around $20 or less without shipping cost.

And I agree popping yourself either with this type popper, or just plain microwave type containers is so much more healthy and tasty than the package microwave popcorn.

@BornToShop - I love Dash products, so when they started making air poppers a few years back, I investigated to see if I wanted to change from my Presto PopLite that I've had for awhile. I discovered there is one flaw inherent in all of the Dash models as well as most models from other brands: The area where the popped corn is dispensed typically ends in a short, flat lip that shoots the pieces straight out into the air rather than at a nice downward angle into the bowl, making a mess. My PopLite (which is still available from many retailers, including at QVC as K133008, though it is a bit pricier here) has the nice feature of a slanted, slightly longer lip as well as angling in the top plastic covering that helps the popcorn descend nicely into your bowl in a fairly orderly fashion. In the end, even though the PopLite has a somewhat larger footprint than the newer models, I've stuck with it, and it still performs perfectly.

I also purchased the Colonel Popper—love that name—silicone microwave popcorn bowl on Amazon, and it works great when I just want quick popcorn for one. The fact that it is its own serving bowl (which collapses for easy storage) is a bonus.

i like the glass microwave popcorn poppers that qvc has sold. i have purchased at least nine of them......kept two......gave the rest of them as gifts with gourmet popcorn kernels. ECOLUTION 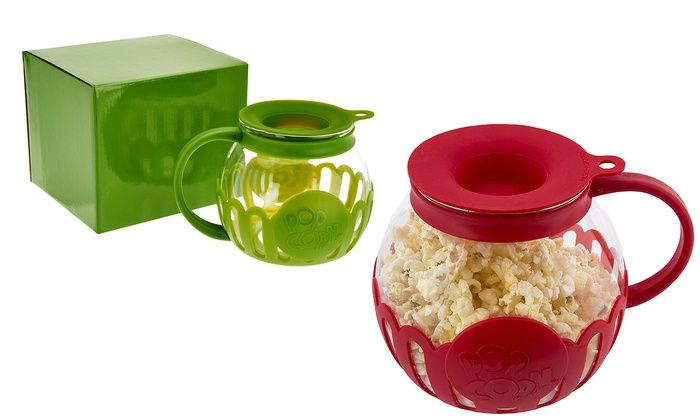