"Three Colorado children who returned a wallet stuffed with $700 of cash to its owner have been hailed by well wishers.

Haylie Wenke, 13, her brother 6-year-old Reagan, and their friend Ashley Dayton are seen on surveillance video around midday on July 18 approaching the front door of an Aurora home, where a robotic voice tells them to leave a message.

Haylie tells the messaging system they had found the wallet outside a car and were returning it so no one would take the money."

'We found your wallet outside of your car and we just thought we would give it back to you,' she says, before hiding the wallet by the door. I'm going to put it over here so no takes any money. You're welcome. Thank you.'

Haylie told KDVR-TV the trio were riding their bikes to a water park when they spotted the wallet and decided to return it.

'We just thought it would be a good thing to do,' she said. 'It just feels good because we really didn't need the money. So we just decided to give it back.'

The residents say the wallet belonged to their son, Nigel Drake.

His father, Jamie Carlton, posted the video on Facebook so he could find the children and thank them.

The children's parents spoke to Dailymail.com of their pride. Mother Kerri Eddy Wenke said: 'It is very humbling the kids have gotten so much attention!

'I would like to take credit for their actions, but we really can’t. They were by themselves and chose to put the wallet in a safe place all on their own!

'As parents I think we always hope they are doing the right thing when we are not around or when no one is watching. It makes me very proud!!'

Father Ryan Wenke said: 'We try our best to make sure they are taught between right and wrong. 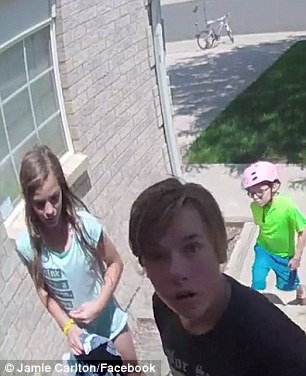 You never know how strong you are until being strong is the only choice you have.
Report Inappropriate Content
Message 1 of 9 (1,110 Views)
Reply
16 Hearts
Bri63
Valued Contributor

There are many wonderful children who have been taught to do the right thing.

I wish we would hear more of these stories!

I hope the local news people make a HUGE fuss over the good that these kids did. Very admirable.

Reinforce good (the right behavior).  It's a big thank you to the kids!

We sure hear enough about the kids who don't behave.  Time for some good news.

There are many wonderful children who have been taught to do the right thing.

I wish we would hear more of these stories!

There's too much negative being reported, that it's nice to have a 'feel good' story come along!

You never know how strong you are until being strong is the only choice you have.
Report Inappropriate Content
Message 5 of 9 (1,056 Views)
Reply
7 Hearts
sunshine45
Honored Contributor

when did it NOT? and with all of the HORRIBLE, DIVISIVE, and SAD stories we see daily, this simple act of kindness is worth reading about. we need to hear more of them actually.

To offer or perform intuitively an act or deed of compassion, unconditional love, understanding, kindness, volunteering, help, listening to or support to a family member, a person in your community or a person you meet during your day.

Nice story,great kids but I don't find it at all surprising.  The vast,vast majority of kids in this country are great kids.

Okay, don't bash me here because I think it's wonderful that those children were so honest and kind, but I do have to wonder why this gentleman's son was walking around with $700.00 cash in a wallet.

I certainly hope it was legit and not money obtained for nefarious reasons.   I'm not casting aspersions on this person but that is quite a bit of cash to just carry around.

It's a nice story and shows the young people in a very good light.

I guess about the same time that kids/people NOT "doing what they are supposed to do" became newsworthy.

You never know how strong you are until being strong is the only choice you have.
Report Inappropriate Content
Message 9 of 9 (559 Views)
Reply
2 Hearts