Auto-suggest helps you quickly narrow down your search results by suggesting possible matches as you type.
Showing results for
Search instead for
Do you mean
Reply
Topic Options
DiAnne
Honored Contributor

The show was on at 3 am on the west coast and there was nothing I was interested in so I did not watch.  Guess I did not miss much.

@crazycockermom wrote:
Oh boy. Curious now who this host was. Can’t find the thread in the fashion forum.

@crazycockermom.  It's in the forum 'Suggestion Box'.

It looks like the thread has been deleted. Perhaps it went south.

I happened to see the show this morning.I'm a casual fan of Linea, all I own is two trench coats. I love them. It's only for budget reasons that I don't buy more.

I heard the comment she made to Louis about Thanksgiving and the holidays. I cringed because I know about his loss and his reaction felt so painful, I felt it for him. I lost my Mom to cancer too, in June. Unfortunately I'm all too familiar with the insensitivity of so many people. No excuse for her to say something like that. No one at QVC has told her about his loss? Sensitivity training needed.

I did hear Louis tell her that he doesn't drink, that he only drinks non alcoholic beer. That's all I drink too. I'd like to have one with him and share a toast to our loved ones.

@Greeneyedlady21Oh, that host knows Louis lost his wife. She was the first host when he returned in January 2018 . . . and was a train wreck. Unprepared; inept; rude and self-absorbed.  She admitted he was a recent widower, but was "mean on national TV" to her when complaining about him on her FB page. The next morning on QVC she had the nerve to say something like, "Last night I was in tears."

Have never understood why QVC continues to pair her with such a gentleman and top designer. Louis deserves so much better from the list of talented hosts available and willing to work with the Master.

And her over-used, "I like that" or "Ohhh, I looove that." Frankly, I don't care if she likes something or not. Pretty confident she's never owned a Linea piece; her comments fall on deaf ears with me. Wish she would stop interrupting Louis (and other guests) and let him (and them) speak. Don't need to hear her weird cat-call sounds, either. Would be helpful if QVC taught her manners and provided her with a Thesaurus!

ETA: Who asks others if they have plans to 'party'? Most are not imbibing and doing a bar-crawl.  Is she nuts? Why would she ask anyone, especially if the other person is a senior to you? Almost fell off the sofa. How disrespectful!!

Thanks, Louis, for telling her you don't drink anything except non-alcoholic beer. Although it probably went right over her head. You've tried to mentor this host for a year with grace and dignity. We've been watching. I'm so sorry for your pain and frustration. It's painful for all of us, as well.

@BirkiLady I remember when that was talked about in the fashion forum.

We celebrated our family Thanksgiving early (yesterday). It had snowed and was cold so I wore my new Navy Whisper Knits with my own pearls and Linea tights to the restaurant. Was warm, comfortable and felt so pretty.  Thank you, Louis!

Plan on wearing the Port Whisper Knits for our family Christmas. Think my favorite is the lilac whisper knit sweater with pearl sleeves! WOW, it's a glorious one. After seeing the color of pink today, may have to buy another one to wear for Easter!

Will plan to order on Louis' Nov. 21st show. Today's host selected too small a size and looked horrible in Linea's gorgeous WK sweater, which showed her bra bulges, belly fat and surrounding lumps & bumps. When she put on the jacket in a Size 10, she was much better suited, but failed to show it off well. That hair and those boots were a hot mess.  She didn't help today's show in so many ways. It was painful for viewers, as well. In spite of the host, another great show with more amazing fashions!

Louis, you are breaking the bank this year . . . and I'm thrilled with everything. Keep rocking the WK's!! They are certainly my favorites.

Except for Linea I rarely watch a show. I do like Martha Stewart and taped her today. Martha and Louis really don't need hosts. Has Bob Mackie been on recently? He's another one who doesn't need a host.

I'd love to see him with Leah since her weight loss. I think he's been on with her. Jill and Marybeth are great with him.

If I live ten more years I have enough clothes. Doing very little shopping. The red trench was my Xmas gift to myself.

I hope my comment about scaling down in retirement wasn't misunderstood. I have no intention of abandoning Linea, just cutting back a bit. Instead of 3 leather jackets and 3 trench coats, maybe just one of each! I've been buying Louis designs since his Anne Klein days and his looks are just me. Finding a designer who gets us and styles his looks for our lifestyles is a rare privilege. We are all fortunate.

And, I like how your put it--"still feeling like me" in the clothes you wear. Retirement is a big enough adjustment of "self" without completely revamping one's look, too. Clothes are such an expression of how we see ourselves and this "casual" movement forces many of us into boxes that don't fit comfortably. I can't do sloppy, jeans/hoodies, athleisure either. As we age, we have the right to dress as we please, even if it bucks all the trends!

Speaking of Anne Klein I bought this pin at Lord & Taylor. Not sure what I will pair it with, but will play with it. 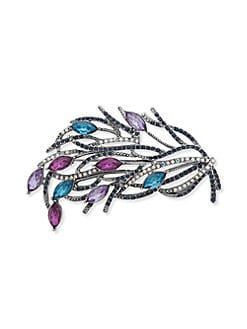 ☼The best place to seek God is in a garden. You can dig for him there. GBShaw☼
Report Inappropriate Content
Message 39 of 60 (610 Views)
Reply
5 Hearts
author
Respected Contributor

Well said about knowing your own identity, being true to yourself, especially, especially in retirement!!  There are so many other things to deal with at this time in life, many new and unexpected, that being comfortable in your clothing style and how others see you as well is absolutely important and will see you through the best of these years, plus help you deal with the changes that inevitably will challenge all of us.