If you haven't heard about this, it's being talked about a lot on FB and news sites, please google and keep the kids that you love safe.

Parents are being urged to 'monitor what your kids are watching' and called on You Tube to take action over an online 'suicide game' called Momo which encourages children to self-harm.

The horrifying trend, which features a terrifying doll and have been linked to teenage deaths around the world.

The Momo character has even appeared in videos on YouTube Kids, which the Goggle-owned platform claims is a 'family friendly' version of the site.

There is a thing called Momo that's instructing kids to kill themselves, turn stoves on while everyone is asleep, find pills and take them and even threatening to kill the children if they tell their parents.

It doesn't come on instantly so it's almost as if it waits for you to leave the room then comes on in mid show.

There's also videos of cartoons doing sexual things, violent things and they may look innocent enough at first glance but trust they aren't!.

The terrifying girl with long dark hair and big bug-like eyes is said to have popped up in videos on the Kids section of YouTube.

The twisted 'game' has also targeted children on WhatsApp, Facebook and other online platforms.

WhatsApp users are bombarded with terrifying images and messages, which range from threats and dares to encourage self-harm and even suicide.

The Momo in question is a grotesque doll created by a Japanese special effects company called Link Factory and designed by Midori Hayashi. Neither he nor the corporation are linked to the sick game.

Last year a 12-year-old girl and a 16-year-old boy, both from Colombia, are thought to have killed themselves after taking part in the Momo challenge.

After the police seized their phones, they said they found messages that were linked to the game.

The Belgian Public Prosecutor's Office also reported in November 2018 that a 13-year-old boy had been the victim of the 'Momo Challenge' and hanged himself. 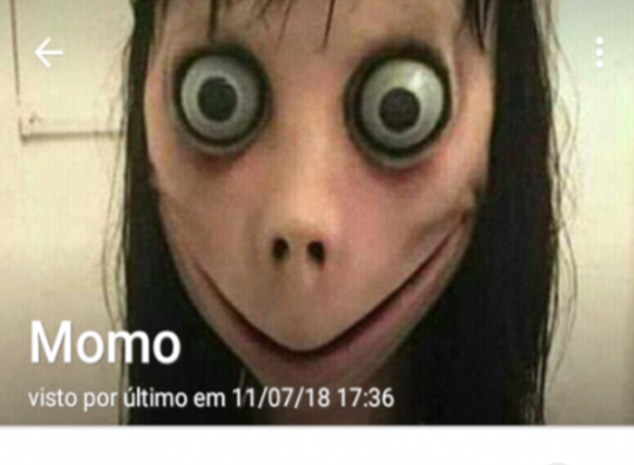 You never know how strong you are until being strong is the only choice you have.
Report Inappropriate Content
Message 1 of 32 (1,372 Views)
Reply
7 Hearts
Highlighted
wsmom
Respected Contributor

ohmygosh, thanks for the heads up, @IG .  I heard of the challenge but I had no idea what it was.

You know, at first I thought this was one of those fake stories going around....but it isn't..... It was on our local news.

There are some disturbing violent suggestions that pop up on You tube when you search for Peppa Pig.

My daughter took away my Granddaughter's tablet since she does like Peppe Pig . They are supposedly even popping up on I pads.

Thank you for this information @IG .  It sickens me to read these things but, sadly, this is our world today.

I've notified my daughter about this as she has a young son who spends a lot of time on the computer.  It's really frightening.

It's also popped up in video games like Fortnite, etc.

One young boy 8 years old stabbed himself in the neck because Momo told him to.

So sick and so sad that some twisted person would do this.

You never know how strong you are until being strong is the only choice you have.
Report Inappropriate Content
Message 5 of 32 (1,271 Views)
Reply
5 Hearts
Highlighted
Cakers
Honored Contributor

Momo is not new and works as a viral chain letter.  So far there is very little evidence of the few suicides linked to Momo.

Parents/guardians/etc. have the power to control what your child does online.

There will always be some twisted online issue; take control of your children's technology and keep dialogues open.

""Out beyond the ideas of right-doing and wrong-doing, there is a field. I will meet you there." -Rumi
Report Inappropriate Content
Message 6 of 32 (1,265 Views)
Reply
4 Hearts
Highlighted
handygal
Honored Contributor

It's offficial: The world has gone crazy!

Kim Kardashian is working with YouTube to get videos removed. 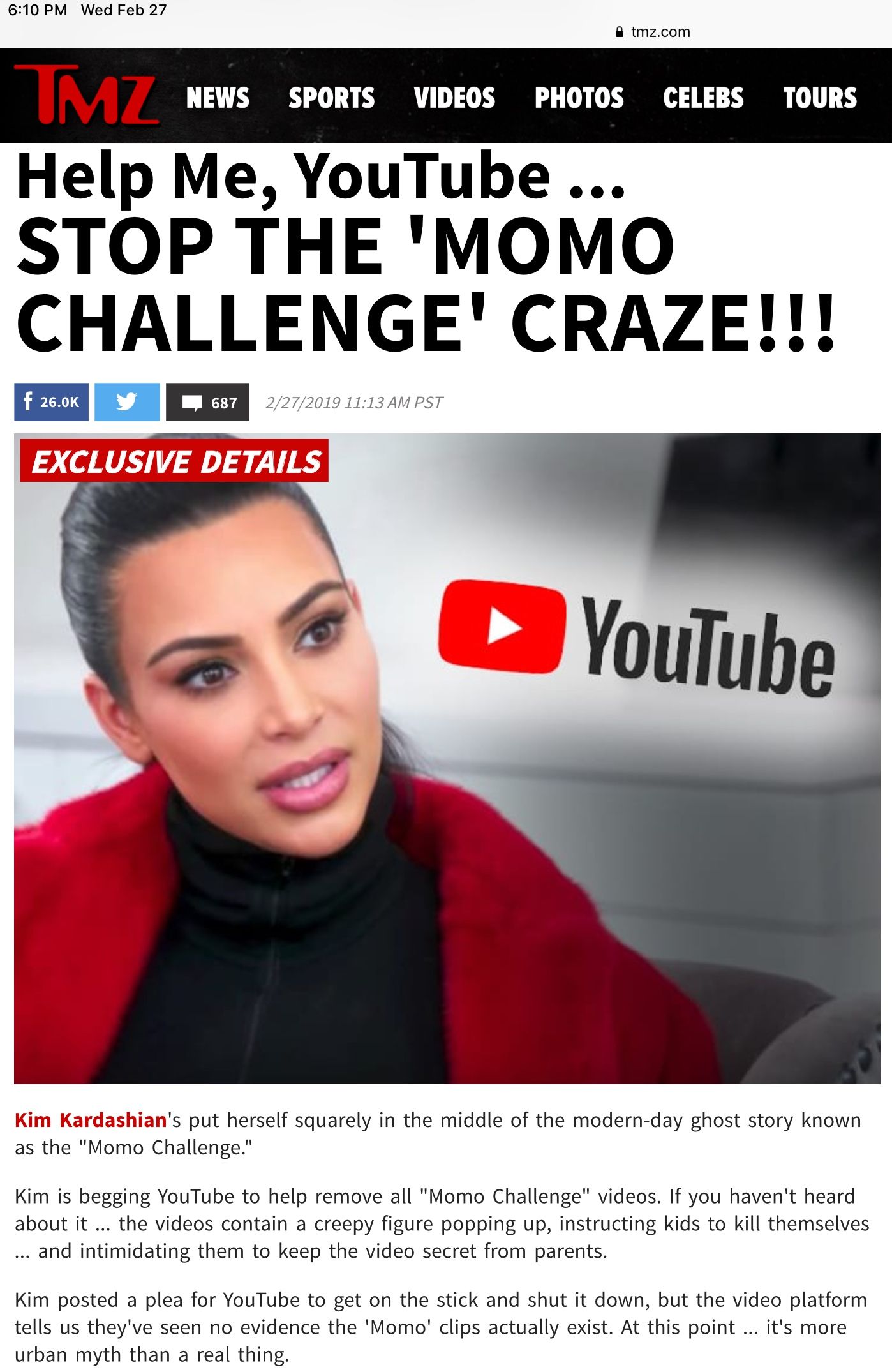 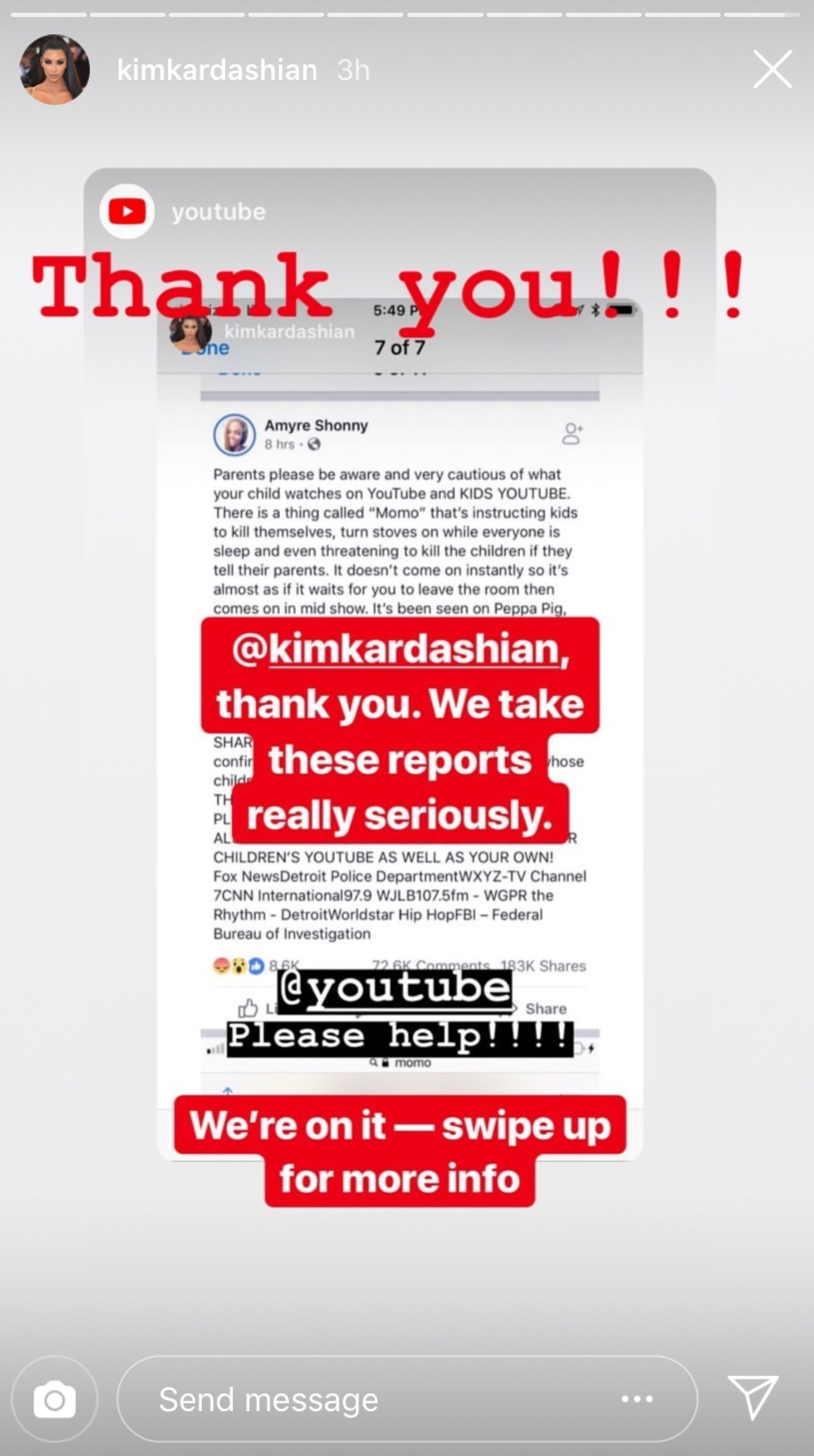 Yes, this is indeed disturbing.  But big picture, larger question.  Why are so many kids free to roam the Internet (which we all know has a ton of creepy, dark and dangerous things) without any parental guidance and worse yet, parental ignorance of what their kids are up to?

Read yesterday about 2 separate incidents where 6 (SIX) year old girls saw MOMO on YouTube.  One of them reported to their mom that MOMO suggested suicide and the other was concerned about being murdered.  SIX YEAR OLDS watching YouTube, clearly unsupervised.

Parents, you chose to bring babies into this world.  How about you get off of Facebook, ditch your cell phones, and start paying attention to those little ones you made.  Find out what they're up to.  Television was a bad enough babysitter, but the Internet brings a whole other level of danger.  How many times do we have to read about teenage girls being "played" by predators and disappearing with these dangerous pervs before we start taking our job as parents seriously?

And gee Kim, thanks for your concern.  While you're asking YouTube to take down some of these videos, how about you ask them to take down some of yours too.  Your disgraceful behavior, especially now as a mother of 3, makes you hard to take seriously.  I challenge you to put clothes on (real clothes that cover your bits and pieces totally) and keep them on for a full week.  No bikini pictures, no half nudes, no butt showing.  I may take you more seriously if you acted like a mom instead of an exhibitionist.

I'll step down from my soap box now, and thanks for letting me rant.  Phew, that felt good.  LuLu