Wow. This one hits hard, as well.

Another suicide & another voice of a generation gone.

Prodigy is a British electronic-acid-rave band, which has been

popular since the 90s. Yes, they had hits which were controversial,

but ‘Breathe’ and ‘Firestarter’ was playing everywhere back

in the mid-90s. Their videos were on constant rotation on

will be hard to duplicate.  Shame. 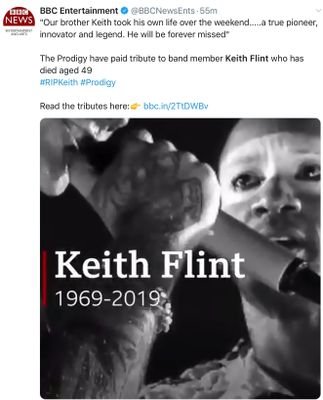 Another tragedy in the music world.  So many have passed and so many voices silenced not to be dublicated, may he rest in peace.

It's as though one suicide begets another suicide.

**Careful... I have caps lock and I am not afraid to use it.**
Report Inappropriate Content
Message 3 of 6 (577 Views)
Reply
0 Hearts
esmerelda
Esteemed Contributor

RIP although this is the first I’ve heard of him.

Drugs?  No cause given yet.

When drugs are the cause, I wonder if they really consciously wanted to die or if they were just sloppy.

Very sad.  Another "celebrity" who I have no idea about, but I worry when young people see these celebrities commit suicide.  Too often, children want to emulate them.

The next time that I hear salt and ice together, it better be in a margarita!
Report Inappropriate Content
Message 6 of 6 (387 Views)
Reply
1 Heart