My sports radio guys guys talk about Art Bell all the time.

They loved him. I think all those HAM radio/AM radio people

I know of Art Bell, but have never listened.  I know the current

leaves an amazing legacy.  And to have passed on to the different 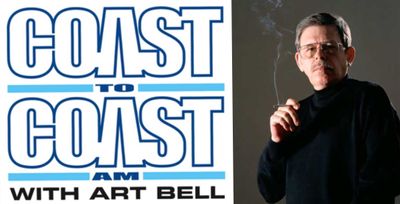 Radio host Art Bell, whose nationally syndicated paranormal, supernatural and conspiracy themed show Coast to Coast AM kept many awake at night – for good reasons and bad – died at his Pahrump, Nevada home on Friday the 13th. Bell was 72.

During its peak in the 1990s, Bell’s show was broadcast on approximately 500 North American radio stations, airing from his isolated hometown of Pahrump on KNYE 95.1 FM, a station he founded.

According to the Coast to Coast website, Bell became an FCC-licensed radio technician at age 13 and once set a Guinness World Record for broadcasting solo for 116 straight hours while working as a DJ at KSBK in Okinawa, Japan.

I listened to Art for many years while delivering newspapers in the middle of the night.  He kept me entertained with all his "out there" guests.

If you want to change the tenor of your interactions, you must become aware of the impact of your words...Karen Casey
Report Inappropriate Content
Message 2 of 15 (1,011 Views)
Reply
8 Hearts
sidsmom
Honored Contributor

“East of the Rockies...you’re on the air”

‘Our friend, Art?  He is now ‘North of the Rockies’. #godspeedart’

I always thought he was a little strange but I was never interested in the paranormal and aliens and that sort of thing.   He lived 'over the hump' in Pahrump.

I used to listen to Art Bell every night. I found the show fascinating. Looking back I don’t know how I stayed up so late and still managed to get up for work every day.

To me, Art seemed a little strange but I think he was a standup guy.  When a friend was hospitalized and critically ill, he left the program to be at his bedside. When his son had a problem, he left the show then too. Art was also an animal lover. When one of his cats became sick, he posted how much both he and his wife cried (the cat survived).

After Art left Coast to Coast, I only listened occasionally.

I used to fall asleep listening to him every night.  Loved his show.

I'm a long time fan of Art Bell and now George Noory on Coast to Coast am.

with haunting interest.  I will miss the man with the captivating voice.

~ To Know, To Dare, To Will, To Remain Silent ~
Report Inappropriate Content
Message 9 of 15 (587 Views)
Reply
2 Hearts
Nataliesgramma
Esteemed Contributor