Auto-suggest helps you quickly narrow down your search results by suggesting possible matches as you type.
Showing results for
Search instead for
Do you mean
Reply
Topic Options
cimeranrose
Valued Contributor

Today marks the 400 year anniversary of the Mayflower landing in America. "In 1620, a group of Pilgrims left England seeking religious freedom. Upon their arrival in the New World, they created the Mayflower Compact, which established self-governance for the colony and helped shape the nation that eventually became the United States of America."

I have been doing genealogical research for 20+ years. In the last year or two I have discovered I am a descendant of the following people who were on the Mayflower: William Brewster, Edward Doty, Stephen Hopkins, and Francis Cooke. It is estimated that there are between 10 - 35 million Mayflower descendants in America today.

William Bradford is my many times great grandfather.

Thank you for reminding us about the anniversary of the Mayflower voyage.  Six of my ancestors signed the Mayflower Compact:  Samuel Fuller, John Howland, John Tilley, Peter Brown, Francis Cooke, and John Billington.  I have been researching my family tree for over twenty years, as well.  This year, I finally joined the Mayflower Society, just in time for the anniversary!  I am thankful for those who came before me and suffered such hardships for a better life in the new world!

I am thankful for those who came before me and suffered such hardships for a better life in the new world!

Yes @hetty ! Me too. That's neat you joined the Mayflower Society. Was it complicated to do that? Was there a fee?

I just got a book that was recently written about Stephen Hopkins entitled "A Stranger Among Saints: The Man Who Survived Jamestown and Saved Plymouth." I also bought the commemorative stamps.

I saw a documentary on this anniversary this morning.  Both the documentary and Wikipedia list the actual disembarkation at Plymouth Rock as being in December 1620, not today.  Regardless, there will be no celebration; all festivities will be postponed until sometime in 2021.

They've built a new replica of the Mayflower.  To see it under full sail on the high seas is a breathtaking sight. 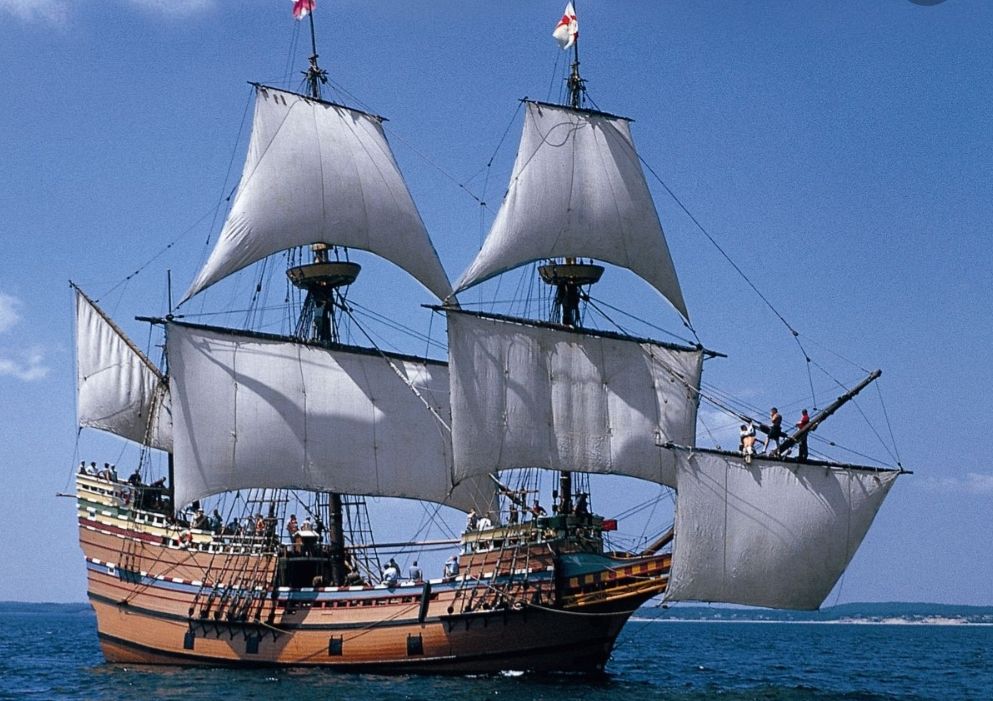 Stephen Hopkins was a very interesting man.  You would be eligible to join both Mayflower and the Jamestown lineage group  for Hopkins!

As for joining the General Society of Mayflower Descendants (Mayflower Society), you can contact them via their website and look under membership.  You actually join through your state society.  You don't have to join the state where you live, but people who want to be active in the society generally select to join their home state.

It is the state historian who will help you with the application.  There are books put out by the GSMD called Silver Books that trace the first five generations of most passengers.  You would need to prove your lineage up to the last generation in the Silver Books.  It was not hard for me because I have a third cousin who recently joined, and I only had to prove up to my 2x great grandfather and then I linked to his application.  Proof would be birth, death and marriage records for each generation for both spouses.

The cost varies in each state.  There is an application fee in addition to yearly dues.  I think I paid $120-something in my state to join, which included the first year dues.

It's generally believed that the Mayflower arrived at Cape Cod in November 1620, with landing at Plymouth occurring later, sometime in December.

And here are some Mayflower postage stamps!

It is prudent to remember that those on the Mayflower were seeking religious freedom.  They wanted their different belief system to be honored, respected and allowed.  By extension, to honor and recognize this founding principle, we need to honor the respected religions of others who call the United States home.

To do otherwise would be disingenuous and not in the spirit of the original thinking for this particular freedom.

Some of my family landed in what is now the Virginia area in the mid 1600's, and never strayed north of there as far as I know.