Auto-suggest helps you quickly narrow down your search results by suggesting possible matches as you type.
Showing results for
Search instead for
Do you mean
Reply
Topic Options
Mindy D
Honored Contributor

Is over ten days a lot for a return picked up by USPS to show up at Q?

Is over ten days a lot for a return picked up by USPS to show up at Q? I set up a UPSP pick up to return a box to QVC on October 1. I received an email that the item had been picked up. The email contained a Confirmation Number but no Tracking Number. I have no way of tracking the item. It has not shown up at QVC as a return yet. I checked the USPS site to see how I can find out about the package. I tried to track it or locate it with the Confirmation Number. I'll have to call them tomorrow and also call QVC. The box I sent had the QVC Return Label on it. I learned that I could have avoided this if I had set up an account at the USPS site, but it's too late now. If you have suggestions, I'm all ears.

EDITED TO ADD that I went online to schedule a pickup by USPS at my front door. I used the QVC label for the return. I affixed the label over the ship to me label as per the directions. There were three tops inside a lightweight box. The packing slip was included inside the box with them. After the box was picked up on 10/1, I received an email from USPS with a confirmation number but no tracking number on it. I've been waiting to see if the return shows up at QVC.

I've tried tracking the package online but that can't be done without a tracking number. The confirmation number is useless.

Today, 10/9 I called QVC CS and spoke with a helpful representative. She said that Q usually gets notice when a package with one of their labels is picked up but that there was no notice for my package. She saw nothing in their system that the pack age was on its way back. She said they did have some tracking number they use for the pkg and she gave me the number. She advised me to wait a few more days.

Then I spoke with another representative at USPS that said they have no way of tracking a pkg using the emailed confirmation number. They need a tracking number. There is no linking of the two numbers. I said it would be a good idea if the USPS, when scanning the pick up to generate the confirmation email,  include the tracking number along with the confirmation number in the email. She asked if I took a picture of the box. I said no. I said I would have had this  been suggested on their site. She said it will probably show up at QVC and to wait a few days.

The ironical part of this is that I take pictures of everything. The one time I don't, this happens. I just thought the confirmation number was my proof. I do have the email and the tiny tear off with the merchandise information and order information from the packing slip.

It is not the speed of my refund that I'm concerned about. I'm concerned that the package is lost and that I don't have a way to find it. The long time frame since the pick up is what made me think the box could be lost.

Did you get a receipt from USPS when you mailed the package?
If you did, you can call QVC c.s. and have them track the package.

Good luck trying to getting hold of someone at USPS.

I tried last week and couldn't get past their automated system.

@Mindy D From reading here as much as you do, I'm surprised you haven't seen a lot of posts saying deliveries have been slowed due to the pandemic.
Report Inappropriate Content
Message 3 of 7 (409 Views)
Reply
1 Heart
sunshine45
Honored Contributor

last return i had took about five weeks to post a refund. i do always make sure to get a receipt when i send it back usps.

if i have another, i will definitely be using this process.... 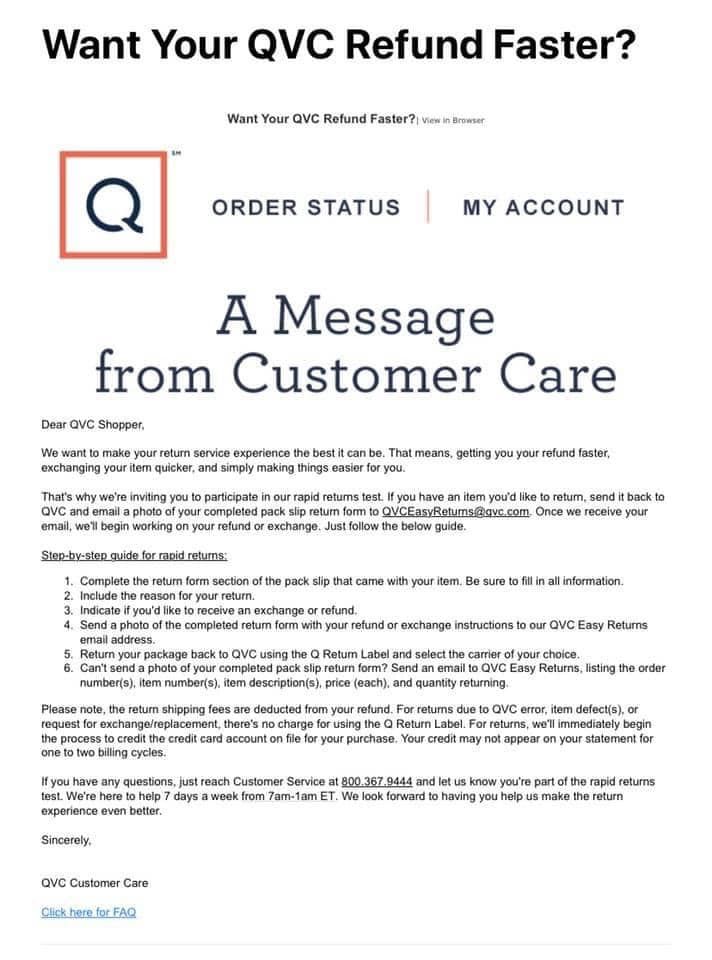 I worked in a smaller sized metro post office for several years after retiring.

This isn't a USPS problem.

Q's label is for parcel post and, as many retailer return labels, relies on 3rd party vendors to move it from place to place.  These 3rd parties aren't going to pick up packages until it's profitable to do so. There is not any USPS tracking for parcel post.

Q's return labels cost you at least $6.95. You'd be amazed what I can fit into a USPS flat rate cardboard or padded envelope which provides complete tracking, delivery confirmation, and faster delivery.

@Mindy D   If you dropped off the package at the Post Office, they would have given you a receipt with a tracking number on it.  You can certainly track that number on the USPS website without an account.  I've done that many times.

You have no choice but to wait. You have proof of pick up.

With all the threads here on late deliveries and returns, you must know your package will take more time than usual.

""Out beyond the ideas of right-doing and wrong-doing, there is a field. I will meet you there." -Rumi
Report Inappropriate Content
Message 6 of 7 (261 Views)
Reply
1 Heart
Hoovermom
Respected Contributor

I have had the same problem and takes forever on a refund to CC.