Auto-suggest helps you quickly narrow down your search results by suggesting possible matches as you type.
Showing results for
Search instead for
Do you mean
Reply
Topic Options
violann
Honored Contributor

I consider myself a pretty loyal GMA follower from 7am-8:30 or so am, and as soon as the performaces come on, I turn to one of our local channels.

Who wants to watch a concert by ANYBODY when it's time to be going to work.

Like my husband said lots of music today is just vulgarity.. 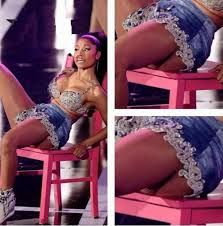 Yorkie, that would be so pretty for your Christmas cards... LOL

NM isn't even attractive.  Look up she and Drake on stage together- talk about nasty..  and parents let their kids go to these concerts-  oh what good representation for young girls to look up too, NOT..

As I said, I think Nicki has a lot of positives that she could be emphasizing, but she doesn't. I think she's pretty underneath the glitz, has a decent vocal talent, and is a fairly good rapper. She has good business sense, a flair for extreme design. I started this thread, and my main complaint was toward GMA which seems to book some acts that they know will be bleeped at least half of almost every song. That happened with I believe Jason De Rulo as well. I don't mind the concerts, depending on who is performing, but why should I be treated to constant blank spaces in the audio? Some artists on their own have enough sense of the television audience to alter a word or two for that audience. You would think that GMA would have that understanding with the artist BEFORE they have to blank out half of the performance.