Auto-suggest helps you quickly narrow down your search results by suggesting possible matches as you type.
Showing results for
Search instead for
Do you mean
Reply
Topic Options
CLEM
Respected Contributor

I remember how Ramona was up at the window just before she was giving birth and desperately wanted to get out.  I think she really wanted to go to the nest she may have picked to have those sweet kittens.  I am glad she finally did get out.

My eyes filled with tears and I haven't watched the video yet. I saw Kimsies  snuggling with Stachie just a few days ago.

My eyes filled with tears and I haven't watched the video yet. I saw Kimsies  snuggling with Stachie just a few days ago.

@yahooey...Same here...my heart is breaking!.....What a beautiful and precious love story Kimsies & Stachie have authored together....I love how he nestles into her and they rub their heads together and the way he reaches his paws out to her....filled with such appreciation and love....and the look of pure bliss on Kimsies face....When the time comes for him to cross over the Rainbow Bridge, Kimsies and everyone can find great comfort in knowing what a blessing it was that he was able to spend his sunset months in such a "purrfectly" wonderful home filled with much loving care!

@yahooey....Thanks for posting Hyatt's return to the Happy Forest...I have to admit that I have mixed feelings about his return at this time...I am just a little concerned that, while his eyesight showed great improvement while at TK in limited space, I am hoping that it is also good enough to navigate the large Happy Forest area....I do hope that he shows up at the feeding stations, as I know that they will keep a close eye on him.

Something afloofy comes this way...

Here is the intake video and I didn't watch the whole thing but skipped around. 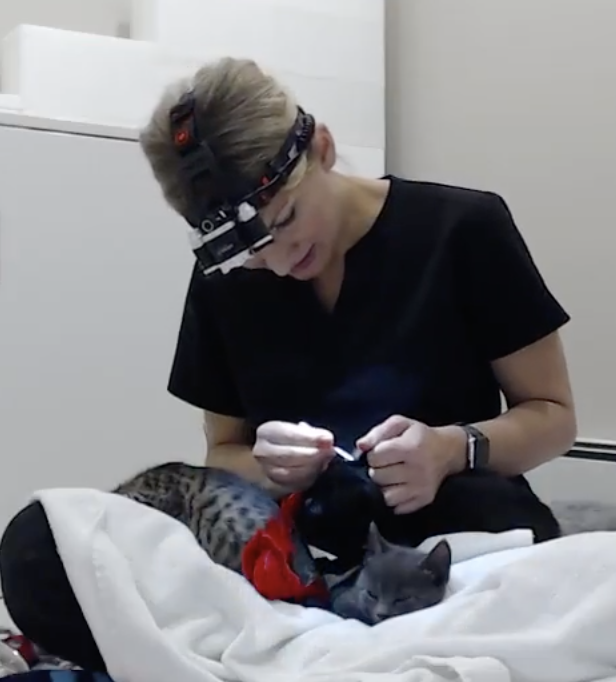 I just started to watch the video, but could only see 3 kittens.   For kittens, they are curiously uncurious.  They are not afraid of Shelly, but they also don't react to her.  One was up high, and when Shelly tossed a ball, this one was the only one who wanted to go to it.  But when Shelly lifted the kitten down, it wasn't interested in anything other than to climb back up.

They seem sweet and docile, but I wonder what their story is.

I actually saw the intake last night. I thought it would never end as I was ready for bed when I checked in, but of course had to watch the whole thing!

Evidently these kittens had a caretaker who did not want to give them up, but Gwen had been talking to the caretaker and realized the kittens needed more help than maybe the caretaker was able to give and finally TK got them last night.  No more details than that were given, but it doesn't matter, they are in good hands with Shelly who has the resources to see they get what they need.  One may have a spinal (back legs) issue and cannot walk normally.

Shelly was in her glory, cleaning all those ears, lol!!  They got vaccinated and were estimated to be 7 weeks old.  4 boys and 2 girls.

I agree, @CLEM, they were not very active as most kittens are, except for the one black one.  I don't know if maybe they don't feel good or what is going on with these little ones, but their affect was flat and they were so silent.  I'm so glad they are at TK now.

There was another person there with Shelly for a while and he seemed very very nice and held a couple of the kittens and asked questions, and Shelly as usual, was great at answering them. Have no idea who he was, but of course some of the chatters jumped right on it with inappropriate comments, some of which needed to be deleted. Hopefully they didn't scare him off, he seemed so kind and gentle with the kittens and genuinely interested in what was going on with them.

a short clip of them playing - https://youtu.be/VRnUlzioTK4