Auto-suggest helps you quickly narrow down your search results by suggesting possible matches as you type.
Showing results for
Search instead for
Do you mean
Reply
Topic Options
Highlighted
ScrapHappy
Trusted Contributor

I plan on making a recipe from Ina Garten that calls for spanish onion.  Problem is, I haven't come across any.  Is there something I can substitute with, like a plain yellow onion?  It's a pasta dish, penne alla vecchia bettola, and it's part of the sauce that gets all put in a blender.

Google will tell you to sub. a yellow onion.

Use a yellow onion.

Good to know as I've never come across one either.

Too bad you don't have a selection in your area. We always have a variety from which to choose: Spanish, yellow, cooking, white, red, Vidalia...

I always use Spanish onions for Spanish rice. They're large and have a stronger flavor, though they mellow somewhat as they cook. For almost everything else (except for cold salads when DH likes red onion), I use cooking onions. They're mild, but still tasty.

I don't know the flavor profile your recipe, but if you don't want a strong flavor, cooking onions won't overwhelm your dish. Yellow onions are good, too, but they tend to get sweeter as they cook. They're yellow in color, like Spanish and cooking onions, but they're different varieties--that's why they're marked differently in supermarkets.

This is a Spanish onion (not a red onion--they're two different varieties, too): 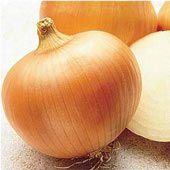 @ScrapHappy According to Bon Appetit Spanish onions are yellow onions.

Spanish onions are large, sweet, and juicy, with colour ranging from yellow to red. Their flavour is mild, and they are used raw and sliced for salads and sandwiches and as a garnish.Italian onions, or cipollini onions, are flat, with red colour and mild…

BTW, I don't believe they are red onions, as someone stated.

Learn something new every day....I always though Spanish and Yellow Onion were the same thing.  For some reason, I always buy and use red onions regardless of what I'm making.

Knowledge is knowing that a tomato is a fruit, but Wisdom is knowing not to put it in a fruit salad.
- Author Unknown
Report Inappropriate Content
Message 10 of 10 (198 Views)
Reply
1 Heart