I was reading a review last night on a pair of shepherd's hook earrings that came with stoppers.  Several people commented that they should have been lever backs and one older woman said she couldn't d manupliate the stoppers.

The pair I received ARE lever backs because I took 30 seconds and changed them out.  I've changed dozens of my earrings, and for security won't wear a new pair until they've been changed.

You'll need a small jewelers' plier.  I picked up one in the crafts dept. at Walmart.  You'll also need lever backs which I buy in quantity.  I get silver plated as sterling are too expensive, usually $5-6/pair, and they MUST have an open loop, meaning the loop is cut so you can open it with your plier.  I've gotten them on eBay and at jewelry supply stores.

To change them grasp the lever back between your thumb and forefinger, and with the pliar bend the loop to the side, not straight out toward the front.  Also bend the wire on the loop on your shepherd's hook and remove the earring.  Now take the earring, making sure it's facing front, and slip it on the loop of the lever back.  Now with your plier move the loop back to its original position and you're finished.

I buy stainless steel leverback findings and switch out my hooks.  Most all of my jewelry is white metal so that goes with it.

You never know how strong you are until being strong is the only choice you have.
Report Inappropriate Content
Message 3 of 10 (605 Views)
Reply
2 Hearts
Peaches McPhee
Respected Contributor

They (the reviewers) knew the earrings were shepards hooks when they bought them.  If you cannot manage hooks, or change them out like OP suggests, then don't buy them.    Honestly.

@Peaches McPhee    it doesn't seem to dawn on people that they can easily change them.  That's why I thought I'd mention it.  After you do one pair, it's so easy, you want to do every one you own.

Thank you, @Kachina624 ! I was one of those people that it didn't dawn on about changing into levers.

I have a couple of earrings that have the shepherd's & stoppers, and I can do them all right, but I do like levers!

Can anyone help with this? ~ My one pearl omega earring lost it's sterling omega back. I'm wondering it that would be hard to change. It's impossible to find a jeweler around me that does repair.

@Harpa    Does your pearl appear to have been glued to the omega back? It may just be a matter of gluing the pearl to a new omega.  Finding one the right size will be the real trick.  There are some big places like Rio Grande Jewelers Supply that might have them.

@Harpa    Does your pearl appear to have been glued to the omega back? It may just be a matter of gluing the pearl to a new omega.  Finding one the right size will be the real trick.  There are some big places like Rio Grande Jewelers Supply that might have them.

The pearl is in a setting. It's just the back part with the hinge that came off. I'll check the RG that you suggested. Thanks! I think my husband may be able to fix it, but I would definitely need an omega replacement.

I'm not able to do that with my old arthritic hands.

I took a jewelry class & failed miserably, but I keep the tools

I don't have a problem with the stoppers on Shepard hooks.

There are different kinds, the ones I like are not smooth but are star shaped, easier to grip   They are larger than the little backs that usually come with the earrings, but they are clear so not noticeable..

Lever backs will eventually fail, they break or bend but I love a good shepards hook 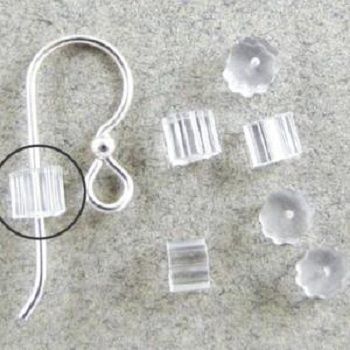 I think the stainless leverbacks are more sturdy than sterling ones. I've never had one break on me plus the stainless are hypoallergenic.