Auto-suggest helps you quickly narrow down your search results by suggesting possible matches as you type.
Showing results for
Search instead for
Do you mean
Reply
Topic Options
KonaKat
Esteemed Contributor

SHOPAHOLICS ONE DAY AT A TIME (CHRISTMAS DAY)

Good morning, everyone. I wish you the best on this Christmas Day and hope you got what you wanted, including the true meaning of Christmas. Let us hope that the joy and spirit of this day goes with us for each day of 2016. 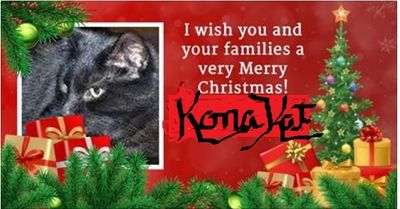 **************** "A black cat crossing your path just means that it is going from one place to another." Proud owner of a black cat and a shopper of QVC since the merger with CVN.
Report Inappropriate Content
Message 1 of 10 (470 Views)
Reply
4 Hearts
birdmama
Honored Contributor

I spent Christmas Eve with family, made sure I dressed for it (just a little) and even put some makeup on for pictures.  I took my canon powershot with me, thinking I would take pictures.  I got caught up in playing with the great nieces and managed to get one picture of the baby Fiona (being held by her Dad).  Best laid plans (you know how that goes).

The dinner was wonderful as was the company.  My birds are accustomed to being settled for bed by a certain time each night, which I really try to observe for my senior bird Poppi.

The merry making was running about an hour behind schedule, so when I returned home at 11 pm, my birds were not amused - their mom was over 2 hours behind.

I moved like greased lightening as I refreshed water, swept seed and apologized profusely.  They don't seem to be holding a grudge this morning -  whew.

I ended up talking to my sister (who had been at the celebration with me) until 2 am (after she arrived home and I arrived home).  It's been a long time since I've been up that late and I find myself a wee bit tired as I sit here and type.

I hope that every reader enjoys this day in some way.

There are many elements: wind, fire, water
But none quite like the element of surprise
Report Inappropriate Content
Message 2 of 10 (447 Views)
Reply
4 Hearts
spix
Respected Contributor

Last nite was a good one, the kidlets were in rare form LOL, food was good & enjoyed being with (almost) the whole family, first born lives in Vegas, much to my regret, but it is what it is.

Today will be quiet, rib roast, lobster tails, etc, for a good dinner, only 4 of us, all adults as the kids are with their father, another story.

Sadie managed to find a bag of cookies & of course ate them all, yikes, but she seems to be ok, will see how she does today.

Wishing you all a blessed day in whatever way you celebrate

Good Morning and thanks for your greeting, Jean.  I hope everyone is having a nice Christmas.  My day is quiet, but I'm looking forward to seeing DD and family via Skype in an hour or so.  I made an apple cake for dessert last night, and it was good.  So far, so good with DH this morning.

You certainly had a wild evening, Bernie.  Glad it was such a fun time, and your birds forgave you for getting home late.  Unfortunately, I have done that myself -- taken a camera, but not many pictures.  Oh well.....

I did make it to the gym yesterday, so today I can just take a walk and do some exercises at home without feeling guilty.

Merry Christmas to all. We had a great time watching Sydnie one up her gifts. Her big gift was a purple, big bike. That will remain indoors until Spring.

i hope you each have a blessed day.

Merry Christmas!!!! I wish everyone all the peace and blessings possible this season, and a happy and healthy new year!

We had our traditional family dinner last night with everyone in good spirits. DS had me tear up twice, which I don't usually do with everyone around. DH told him he'd really done well to get that reaction. lol  My brother and nieces were here, along with my sister and her fiance.

It was 50 degrees when DH and I went to mass this morning. It will be very quiet today, but it will be nice getting back to normal. My brother and nieces had stayed over the 23rd and left for home last night. This was an especially emotional holiday just because of things that had transpired during the year for some in our family, but fortunately  happy endings have prevailed.

I have a bit of straightening to do, take a bit of a rest, then see what the rest of the day holds. A Blessed Christmas to all our posters and readers! pinky

Thanks KK for starting the thread today.

Hope all of you are having a great day today with family, friends or with pets.

I am being a total couch potato myself, watching an NCIS marathon. As you all know our celebration was last weekend so today was kind of anti-climatic, so to speak. lol

We did open up the few gifts we had for each other and enjoyed the little dog opening hers. She really gets into it I must say, it's funny to watch her. She gets so excited to get a new toy.

I am thinking that I may take down my tree tomorrow, it may seem too soon, but it's been up a month now and I'm ready to get my house back to 'normal'. lol

Have a great afternoon/evening. Waves......

"To each their own, in all things".
Report Inappropriate Content
Message 7 of 10 (340 Views)
Reply
1 Heart
RockChick
Respected Contributor

Happy Holydays to all our friends here! We are having a very nice day together. John Wayne marathon on AMC. I'm cleaning a little, cooking a little and decluttering.
Report Inappropriate Content
Message 8 of 10 (339 Views)
Reply
2 Hearts
FunkyHulaGirl
Respected Contributor

Funny, but it seems like this week has been very, very long...I can't believe it's only Friday.

We have another day of 70° temps which is supposed to continue for another week - which is fine with me; I've had to pull out some summer PJs.  There were heavy thunderstorms all night long, and it's still pouring out; even the outside cats didn't come for their breakfast, although Shoshanna turned up looking miserable.  I've decided she has to be an outside cat since she's so destructive but I felt sorry for her; I picked her up, brought her in, and cut her nails before letter her loose; I hope I don't regret it - but she'll be going back out later.  I had been planning to get some Chinese food for dinner (I'm craving mei fun), but unless the rain lets up that might have to wait for tomorrow.  I did have both a Trader Joe's chocolate croissant and a Krispy Kreme lemon filled donut for breakfast (and I slept really late again), so I don't have to think about it for a few hours yet. I didn't even venture out into the muddy yard to feed the fish and make sure the bird feeder still had food in it, but I did hang a seed bell for the birds yesterday, so they won't go hungry...besides which, the bell is under the carport so they don't have to eat in the rain.

One cousin said the gifts she ordered from Amazon didn't arrive until yesterday so I'll have to wait for my present from her; I opened the box from the Florida cousin after midnight. She sent a pair of PJs, which I have a lot of (and just took a bunch to the missions closet), but they're really cute and in my second favorite color - a pale orange - which I don't recall having ever seen in PJs before.  There were also a few little things - a Polish stoneware mug, foot cream and socks, an embroidered dish towel with a cat, an I <3 cats cup with straw (which is nice because when I bring my water home from restaurants in a styrofoam or paper cup and straw I reuse the cup when I'm reading in bed), several flavored coffees, and treats for both the cats and dogs.

The kitties got double wet food today, and the dogs got some big gingerbread man shaped treats that I got in Walmart; I ordered a rope toy for the dogs, but Amazon is running late.

Last night I delivered the cupcakes to my neighbor, as well as a box for her to give to the woman in the house next to her - the one whom I've never seen in over 8 years of living here and who had been in the hospital for quite a while.  She invited me in and we chatted for a bit.  There's one box of cupcakes left; I had intended them for the young man who takes care of my plumbing problems, as he's a sweetie and has the cutest little boy, but he's out of town until next week.  I guess I'll have to make something fresh for him, and I'll give that last box to the kids at the Chinese take-out.  (They're a lovely young family - two girls, one in middle school and one who just started college who work in the store, and a very little boy.)

When I was delivering cupcakes I discovered that the girl who cuts my hair has left and gone to another salon, but they were nice enough to tell me where she went after I left her cupcakes with them. It's more convenient for me location wise, but looks like it's even more expensive...then again, she does such a good job that my hair still looks good since my last cut, so I was shocked when they told me she left five months ago, right after the last time I saw her!  I'll have to see her next month.

Bird, sounds like your feathered kids have you well-trained!

I have absolutely no energy today; even the thought of holding up a book is exhausting.  I think it's time for a nap...I'm fading here.

Hi to everyone - hope you all have a blessed and peaceful day.

Hi Ladies...just wanted to wish all of you a Merry Christmas!!  It has been a difficult time for us, but we are trying to focus on counting our blessings and cherishing our memories.  Enjoy!!!