Auto-suggest helps you quickly narrow down your search results by suggesting possible matches as you type.
Showing results for
Search instead for
Do you mean
Reply
Topic Options
MKR NY
Trusted Contributor

Has anyone downloaded this and have you had any problems? I read there has been problems since they waited to release this. Even though this was suppose to be fixed before releasing this it is messing up some computers.

Since the Windows 10 updates automatically download it was better in Windows 7 as you could stop them until you wanted to download them.

I have been using my iPads this week as I don’t want my new computer messed up.

Boy did I have problems - and I am a retired Software Engineer.

My main issue is that it slowed down significantly.  I had to turn off malware protection under windows defender.  Created a DWORD - DisableAntiSpyware and set it to 1 using regedit.

Thanks for the info.

Thanks @Ricki Lynn. I am afraid if I turn my computer on it will automatically start the update. This is an article I got in a newsletter about computers that I get. 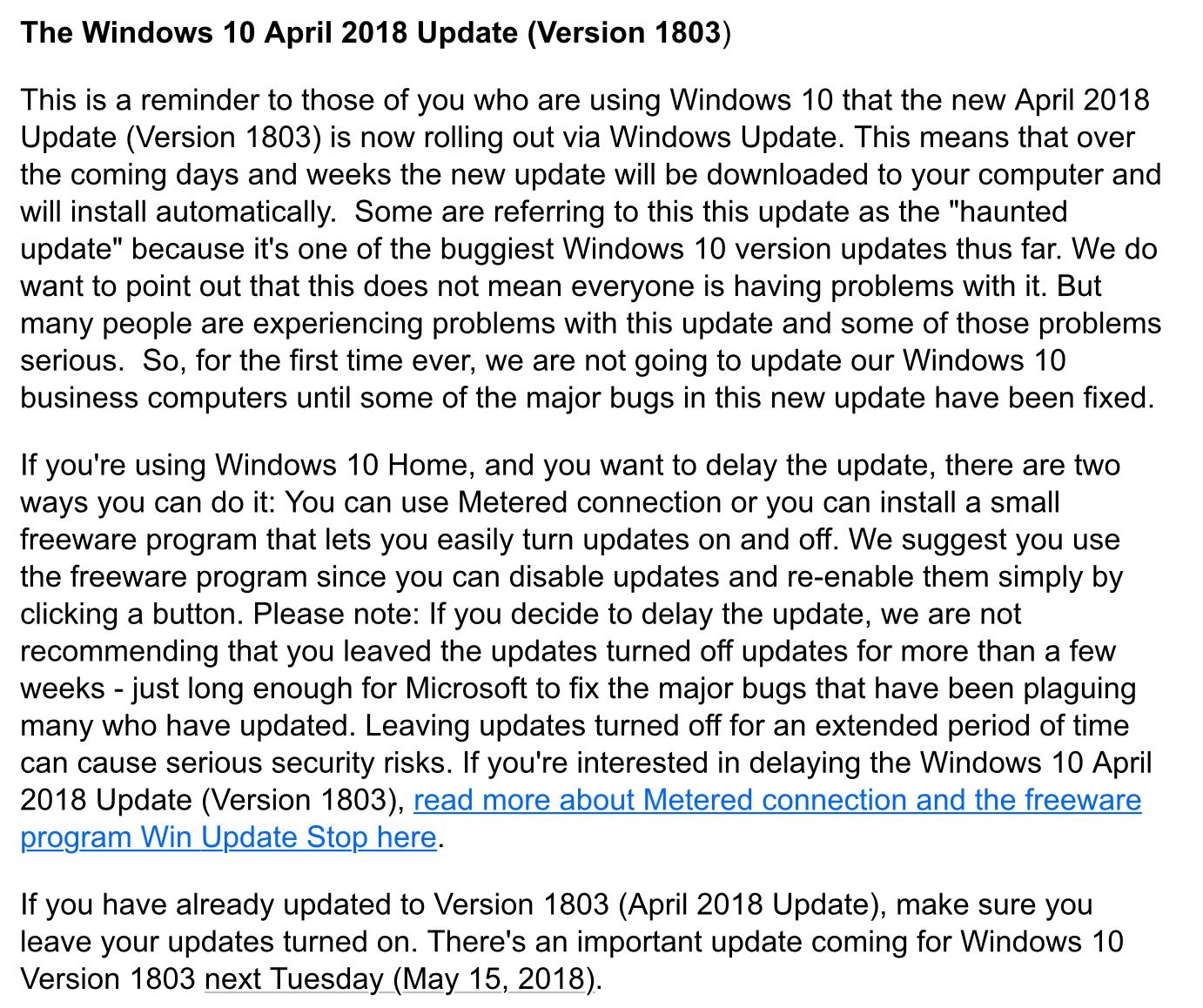 I hopefully will see a new fixed update on the 15th.

This small Windows OS utility allows you to manually disable or enable automatic Windows updates. Sometimes you may want to stop Windows updates so you can choose when to download and install new Windows updates. As you know, Windows updates are very important but they are also known to occasionally create some incompatibilities or problems with the Operating System and the applications installed. Use this utility to block Windows updates and re-enable them when you desire.

Hmm, This is the one that I have Windows 10, version 1709 and by my system it is the most current up to date version as my laptop is set to download updates automatically (frustrating I know) but to me it is important to keep up with the updates because a lot of them are security updates to help protect your computer. I will admit that MS can do better with some of their updating and it should be bug free before they roll them out but again I think a lot of this is done by trial and error on their part. I am NOT a technical person by any stretch of the imagination but I can follow instructions if given to do some techie stuff..

@AngelWhispers It isn’t that I don’t do all the updates so far but when they do the twice a year updates on the new Windows 10 it changes many things that a regular update doesn’t. Not everyone this will happen to but I hope I will be that lucky too.

After reading stories on the problems of the newest updates it is the Windows 10 Spring Creator’s Update that can have some major problems. The newest spring version is #1803 so maybe not all of our computers will receive them at the same interval as others.

Please add your comments if you do the updates.

I may bring my computer up and add the Win Update Stop program to control updates for me to control for the future. I love my new HP computer I bought in November and just want to protect my new investment.

I totally agree..That fall creators update was a MESS! But I think that they finally got all those kinks worked out but it was a rough ride during that time.

If you decide to install that program please be careful to scan it first to make sure it doesn't contain any adware or malware. Also if you use it I would make sure to always install the security updates even if you want to bypass the Fall/Spring Creators updates..

I will be sure to update here if I get the new spring update and if there are any issues noted with my Windows 10 HP Laptop..

The Spring Creators' Update is Windows version 1803. It IS in fact a huge problem for many, mostly in annoying ways. For me, it created a new partition, and then kept constantly telling me that "disk" was low on space and to do something to clean it up. The clean up never work d, so I constantly got that message. His is the same problem many others encountered, I had a dual boot Windows/Ubuntu setup, so I suspect I got my particular problem because of that. Something about the Windows update did not like my other Ubuntu partitions, and messed things up. I simply downloaded and created a new Windows installation DVD using the Windows Media Creation tool, reformatted my laptop hard drive, and did a clean install. My problem was solved (knock on wood). Many other report various other problems. In researching the problem before I reformatted, I found there is a setting under "advanced" when you go to "security and updates" in your Windows settings, that you can set so that you do not get updates until a few weeks have gone by from the update's initial release. I am not on my laptop, so I cannot remember the actual setting name right now. However, since we are forced to get these updates now, I have chosen that setting so that I may be saved such frequent reformatting.

I looked under the advanced options and this is all that I see. I would love to be able to set my laptop to only do that (only download after weeks have passed by from the initial release..

Are these the settings that you are referring to? 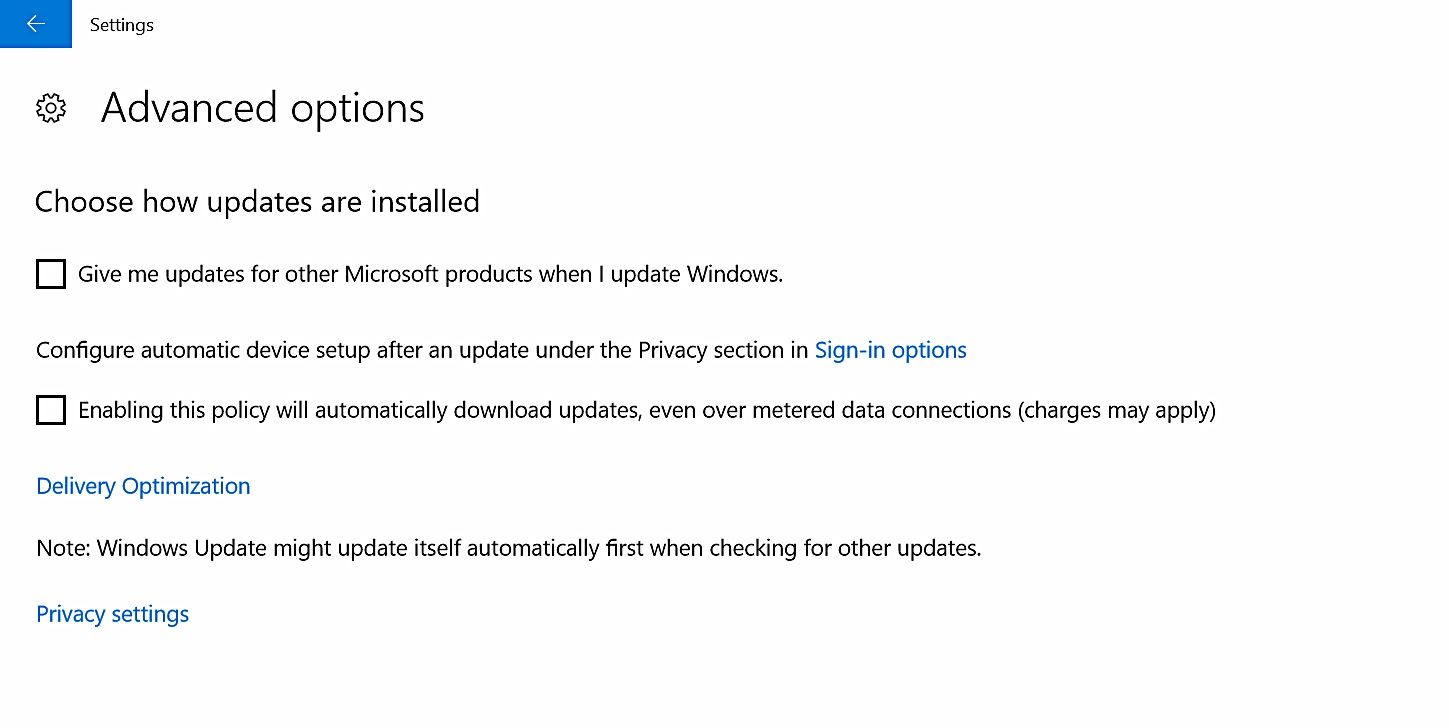 Sorry it is so small, Couldn't copy and paste it for some reason..

Me, too.  I can no longer tell it NOT to automatically update.