To many, automobiles are simply transportation to get from point A to point B.  To me, they represent so much more than just steel, chrome, paint and rubber.  Cars have been my true love since I was very young.  They define us as individuals and say so much about who we are or wish to be.  There will be some of you who just won't understand this but I feel that cars have a personality and each one is unique.  Yes, I talk to my cars.  My wife thinks I am nuts but I pat the dashboard lovingly and thank each ride when she gets me home safe and sound. 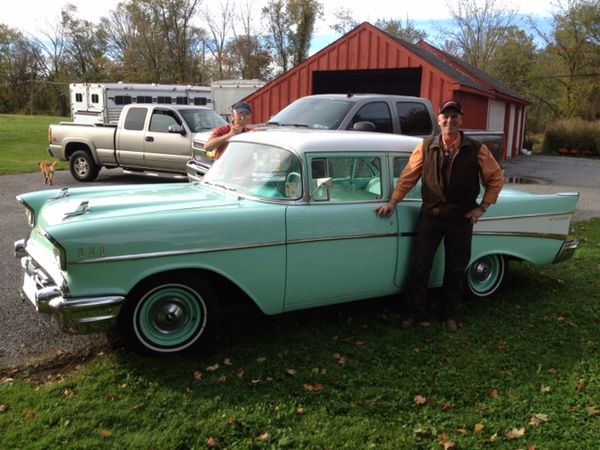 In my chosen line of work I speak for a living.  The research I do each day on the products I present and the work I do with vendors to bring out the best in their "on air" time has its blessings. I get to touch people’s lives in a way that benefits them and that feels very good to be in that position.  But, at the end of the day you cannot see words.  There is nothing I can hold in my hand that's says, "This is what I do."

That is where my passion comes in.  My father installed in me very early on that you appreciate something more if you build it instead of buy it.  That may sound funny coming from a veteran in the televised shopping industry, but it was as much out of necessity as anything else. My mother and father both worked very hard for what they had and although we always had food on the table for five kids, there was not much left over. I learned the value of hard work and a dollar in my early teens.

I could not afford a fancy first car.  For that matter the budget didn't allow the purchase of one that even ran.  So we built it.  In the back yard in Indiana on hot summer nights my father and brother and I tore apart the shell of an old van I had scrapped to acquire. Many months later although never destined to be a show car it was my baby and I drove it through high school.  I knew every nut and bolt on that van because I had touched them all.  I wish I had never sold her after graduation.

After my heart attack in February of 2013, I told my wife of a lifelong dream of mine.  To open a classic car restoration shop that would allow me the opportunity to finish some personal projects that had been put on the back burner and to help others to realize their automotive dreams. I have never put a sign out front yet we have been busy since day one.  I was able to assemble a team of the finest craftsmen in the North East, men like myself who are driven by emotion maybe more so than common sense.  There is no time clock to punch In the morning and although profits have been sparse the experience has been enriching.

Here are some of the photos of projects we have worked on in the last year and a half.  To see these beautiful vehicles come back to life to be enjoyed once again is its own reward.  My customers are not rich; they too work on a limited budget.  But we get the job done.  The last vehicle we finished was a 1978 Ford Bronco that a friend brought to me after it had sat for over 20 years. His wife had purchased it in high school hoping to one day see it restored. Their lives got busy with marriage, kids and a mortgage. Last year she was severely injured in an auto accident and her husband wanted to give her a recovery gift of the old truck.  My team and myself spent countless hours late at night and on weekends to finish the vehicle in time to surprise her with the final result at the largest car show in the North East.

Totally unaware that the Bronco was even out of her parent’s backyard, she was stunned by it sitting before her, beautiful and finished. She cried for almost a half hour and the hugs she gave us made even my toughest mechanic tear up (he won't admit that but I know it is true).

So as much as I love my job at QVC and will be there hopefully for many more years, working with my hands to restore these vehicles has made me smile.  The feeling of handing the keys to a person who put their faith and trust in my abilities is something that humbles me and yet makes me feel proud too.

So crazy or not, talk to your cars.....they run better and makes them happy too.