Auto-suggest helps you quickly narrow down your search results by suggesting possible matches as you type.
Showing results for
Search instead for
Do you mean
Reply
Topic Options
LdyBugz
Trusted Contributor

I ordrered these cool moon lamps from Am-azon as Christmas gifts for my granddaughters.  They just arrived and I think they are neat and the girls will have fun with them.  They come in different sizes, run on battery (rechargeable) or USB, have different brightness and color levels, tap to change colors or use remote, and comes with a wooden stand.  Made of a thick plastic so not breakable, and the surface is textured so it looks realistic like the moon's surface.  I got the 6" size, $19. Something different and unique.  😀 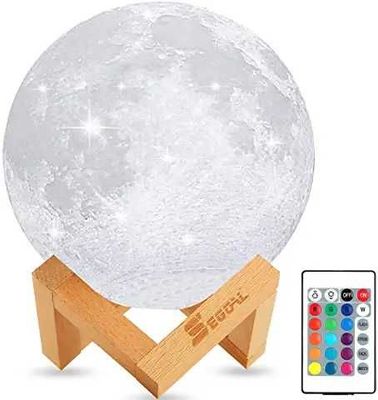 @LdyBugz  I love them and they will, too!

The next time that I hear salt and ice together, it better be in a margarita!
Report Inappropriate Content
Message 2 of 23 (1,398 Views)
Reply
2 Hearts
chickenbutt
Honored Contributor

Wow!  That's super cool.   I have a feeling the girls will love them!

Ha!  I've had 3 of these for about 3 years now.  Mine are a little tempermental at times, but they are backups to other nightlights.  (I think the grandkids used them as bowling balls......)

@Lucky Charm  Oh wow! I had never seen these before.  I guess I'm late to the party if you've had them for three years already. 😉 Hopefully, my girls won't bowl with them.

@Lucky Charm  Oh wow! I had never seen these before.  I guess I'm late to the party if you've had them for three years already. 😉 Hopefully, my girls won't bowl with them.

Yes, maybe longer than that, actually.  They were a steal/deal of the day on a Hallmark show I used to watch (Home and Family).  Lots of cool things I got from that show.

The grandsons were rolling then on the hardwood floors upstairs and it sounded like a bowling alley over our heads.  But we were having so much fun playing games downstairs that I let it go.  (I'm a bad Nana)

They have a warm (golden) glow and a cool (almost blue) glow.  I never changed batteries, but leave them plugged in or make sure they're charged as one goes on a landing where there's no outlet.  They have a really neat texture to them, too.  Kind of raised.  They aren't smooth.

I bought one of those last year, but since I sent it directly to recipient I didn't see it. But the mom said he loves it and she thought it was cool, too.

@Lucky Charm Well if you have any other cool ideas like this light, please, pass them along!  I like getting neat and unexpected presents for the kids.

I think my girls will have fun with these when they have their "dance parties".  They can morph the colors and have it fade in and out, or do the strobe effect.  They also like to create a dance "show" and I am often their audience.  I'm sure you know how that goes; "Come watch my dance show, gramma!"  I watch and dutifully applaud and give high praises for their leaps and spins!  😉

Seems to me you are a fun nana, not a bad one!

WONDERFUL!  Our GS has a room his DD built form him in the basement.  This would be so much fun!  Many thanks!")