Auto-suggest helps you quickly narrow down your search results by suggesting possible matches as you type.
Showing results for
Search instead for
Do you mean
Reply
Topic Options
Highlighted
blackhole99
Honored Contributor

Good to know, if I had to have surgery I'd need all the help I could get.

Thanks for looking into this, @Mindy D

I did not think it would have become finalized any time soon, but was hoping for some progress from the full study linked at the bottom of the original article.

If this research looks promising enough, rest assured some big pharma company will follow up with it, however, these companies are not fond of preventing illnesses they make billions on treating.

Good to know, if I had to have surgery I'd need all the help I could get.

It’s not a big deal. If you feel like it, you could avoid eating potatoes a couple days before   getting procedures requiring general anesthesia. If you don’t avoid potatoes, it’s improbable that there will be any noticeable deleterious effect.

When I eat an apple, I eat everything except the stem.

I have consumed many a seed over the years, and have never suffered any ill effects as a result.

Now, if I were to eat pounds of apple seeds, maybe I would, but I'm not going to go running to call Poision Control, just because I consumed a few apple seeds.

I have even come across an odd potato chip that had a spot of green on it, and yup, ate that chip too.

Never had any ill effects from eating that chip that had a spot of green on it.

The Sky looks different when you have someone you love up there.
Report Inappropriate Content
Message 54 of 62 (152 Views)
Reply
0 Hearts
Highlighted
chickenbutt
Honored Contributor

When I eat an apple, I eat everything except the stem.

I have consumed many a seed over the years, and have never suffered any ill effects as a result.

Now, if I were to eat pounds of apple seeds, maybe I would, but I'm not going to go running to call Poision Control, just because I consumed a few apple seeds.

I have even come across an odd potato chip that had a spot of green on it, and yup, ate that chip too.

Never had any ill effects from eating that chip that had a spot of green on it.

Yeah, but you probably have an apple tree growing in your stomach*.

(*Recalling the days, as a kid, when watermelons were full of seeds and we were told that if we ate the seeds we would have watermelons growing in our stomachs.)

Seriously, though, thanks to all who have provided info for us all!

As I've said repeatedly, everyone is different.

Each of us must be aware of our OWN BODY.  As I've also mentioned I was raised by my Grandma.  Her mother was an American Indian.

My Grandma always taught me to listen to my body, it would tell me what it needs (she didn't specifically say it that way (as she believed in simplicity) but that's what she meant.

I've always listened to my body (especially when it comes to medicine).  Interesting, your post.

I remember a conversation I had with the cardiologist.  He said, "Why don't you like to take some of the medicine I'd like to try on you."

I said, "Well, think about it.  How often have you prescribed a medicine and then the person has to take another medicine to counter the medicine you've prescribed?"

He didn't say anything for a few seconds and then he said, "I see your point.  It does happen more frequently than people think".

So, if a Dr tells me it's vitally important I take the medicine, I'll research it and then take it.

Recently, my arthritis Dr prescribed Cymbalta for my arthritis/fibromyalgia.  I go to another Dr who manages my back spasms and terrible pain.  When I had double knee replacement (at the same time) the (I call her pain Dr, but she specializes with back pain) she controlled the pain medicine during rehab (after the operation).  That Dr said to me, "I've had more trouble getting people off of the Cymbalta than any Oxy or other kind of medicine.  I've seen people suffer greatly trying to get off of Cymbalta.

I took one Cymbalta and got sick as a dog.  This was before the discussion with the pain Dr.  I was telling her about being so sick.  That's when she told me about the Cymbalta.

Obviously, many people take it and they swear by it.  I decided I'd rather live with the arthritis pain.  It doesn't keep my fingers from going wonky so I'll live with the pain.

Now you know why I say what I do.  I'm glad you are alive too as I do enjoy reading your posts.

My eyes probably look similar to that when the opthamologist dilates them during exams.

However, I never get to see  a close-up view of how that dilation can look.

I think the photo you posted is amusing and could be used with a variety of different humorous or scary captions, maybe for Halloween.

Not sure how any folks, many years ago, considered that look "seductive".

Yep. Opthamologiets still use atropine to dilate the eyes. 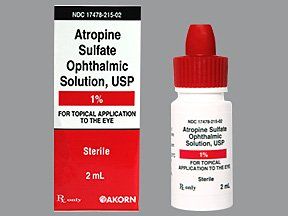 @Mindy D wrote:
hckynut, here is one study showing the ANTI-INFLAMMATORY, beneficial, properties of potatoes. Inflammation is MEASUREABLE; using the measurement of specific markers present in the body.

Ya lost me on this reply to my post. I am not into all the latest studies and my feeling, for me, is these things  are not necessary to file in my shrinking number of brain cells. Unless or until something drastically changes I will stick with my present

Anti-inflammatory for me is something I have to avoid because of my bleeding colon issues. What amounts are in potatoes or the other foods in that category? My body will let me know in how I feel, and also show in my quarterly Hemoglobin readings.

I don't look specifically into those properties in the foods I eat, and/or when. What I know about my body's reaction to what I eat, is all I need to know. Yes. my body has gone through many changes over the decades, and I have learned what needed to be changed to give be the most beneficial physically and mentally for me.

Were I younger and/or one that has never been in tune with my body, some of these things might be more interesting to me. Right now most of these things fall into a minutiae of my concern for my health and physical fitness.

Thanks for looking into this, @Mindy D

I did not think it would have become finalized any time soon, but was hoping for some progress from the full study linked at the bottom of the original article.

If this research looks promising enough, rest assured some big pharma company will follow up with it, however, these companies are not fond of preventing illnesses they make billions on treating.

She obviously didn't say this to me directly, but that's a reason I thought perhaps my rheumatologist wasn't interested in looking into it further than the article I took to her.  Very annoying.

Other than that, I like her.  She's not one of those doctors who bully you (I write those off immediately) and works with me and supports a lot of my own findings, @Mindy D

Are you also familiar with low-dose naltrexone for autoimmune conditions?

As you both have science and/or research/reporting backgrounds, have you ever come across more data on the below article from 2010?  It discusses a promising new remedy for auto-immune disease, without many, if any, side-effects.  All that is much different from existing biologics and other remedies, which are all non-specific and cause one's body to be less resistant to infection.

I've not had luck in finding updates.  I even contacted the reporter, who was no help at all.   Neither was my own rheumatologist, who only referred me to some Stanford researchers (who are not doing this work).

@Homegirl, I am not novmac or Mindy D, but I might suggest that you google the actual name of the researchers of this study.  You can join Pub Med and put is a search for the name as well.  Researchers have a body of science in which they have a specific area of research so any research they have published would come up on a PubMed search.  The major researchers for this area are Durate & Graca.  Since they are located in Portugal, there will probably not be much information in the United States main media  Especially since their work is really in its infancy.

I did read the article and it appears any work in this area is years away from being studied in human subjects so there might not be much out there about it now.  From that article, "There are, however, several challenges ahead before this can be even considered as the mechanism behind the antibody effect is not clear (how exactly is the balance Foxp3/TH17 pushed towards the 1st subset?) and this, together with the fact that the treatment is not very effective treating full blown RA (in opposition to preventing it), shows that much remains to be understood."

"Another question, and a crucial one, is if these results can be translated into humans. However, not only many of the current treatments to RA and many other autoimmune diseases are based on antibodies (although deleting proteins and cells not changing their behaviour), but we already know that humans also have Foxp3 cells involved in protection against autoimmunity. These are both good auguries for a success, soon or later, in humans.

But before anything else scientists need to understand the antibody molecular target and protective mechanism. As Graca reveals “ at the moment we are interested in finding out the molecular mechanisms involved in the tolerance, and whether the same results can be achieved in other T cell-mediated diseases like allergy. We are also testing other animal models where autoimmunity is mediated by Th17 cells. This will give us abetter idea of what is going on and to where go next”.

So it looks like they have quite a bit of work to do to understand more about Foxp3/TH17 & we looking to study is other animals other than mice.

I might also add that the article also talks about what the hopes might be, but the article itself also addresses that it did not impact treatment of RA.  So they are probably years away from understanding more about these concepts and their interplay in order to be applied to any specific treatments.