Things that make you go hummmm:

this year could have been COVID-19 but we didn't have a test for it.

There's so much we don't know about it up until now.

Things that make you go hummmm:

this year could have been COVID-19 but we didn't have a test for it.

There's so much we don't know about it up until now.

I hadn't thought of that but it's certainly plausible.

At the beginning of this flu season, the hospital staff flu shot campaign had to be delayed,  because they were reformulating the vaccine for adequate coverage, at the last minute.  That doesn't instill confidence, does it?

Still, from what I've heard, the virus has morphed since and has become only about 47% effective for this season. This has contributed to the high numbers of those who have been affected.

Some seasons, the virus can play very tricky, which is why full protection is never guaranteed with immunization. But, knowing how deadly the flu can be, I'll take whatever percentage of coverage i can.  And, hopefully, if I do contract the flu, it will be a milder case. Of course, if you're working in patient care, it's currently mandatory, as it should be.

All said, I would not be comfortable taking an early coronavirus vaccine. I would want a time frame that allowed for identification of potential side effects.  In this case, it's going to be a rushed product.  JMHO.

Flu shots are not 100% safe.  People have gotten some bad side effects from it.  I don't mean a sore arm or mild fever for a few days.  I'm talking serious injury.

My husband has a rare autoimmune illness.  At his worst he resembled a stroke victim with slurred speech,  double vision and he couldn't walk unassisted.  He's been to countless doctors over the last eight years.

He sees a neurologist at Penn (one of the top hospitals in the country) who specializes in rare brain disorders.  This doctor has a few other patients who has what my husband does. He's mentioned to us that he believes that one of those patients got sick from the side effects from a vaccine...so no they aren't always as safe as we are lead to believe. As for my husband, we have been told that he should not get one.

However I'm not against them, I just want people to understand that they are not always completely harmless.  One should weigh the pros & cons which is why some choose not to get them ......for those of you who don't understand this.

Thank you for that.

I think everyone can agree that we would all hope and want safe vaccines.

And yes, there needs to be understanding, not judgement for anyone who has had serious side effects from any vaccine.

If someone's family member or themselves had ever had an irreversable reaction to a vaccine they would never judge anyone's fear or skepticism about vaccines again.

Especially if it is a child where the parent is only doing what they hope is the best by following all the rules the doctor's assurances etc. and end up one of the few in a million with dammage to their child that might not be undone.

$282 million was paid out by the US government to people who had claimed harm from a vaccine in 2017 alone. This is money from the Vaccine Injury Compensation Program, established around 1986.*you can search this info yourself if interested, from many sources!)

Yes, an entity not usually mentioned or known about.

So, it is arrogant to say that vaccines are safe period. Yes they are for millions of people.But for the one it is not safe for, no amount of statistics and assurances will make that person feel better, or be convinced that it wasn't due to a vaccine, especially if the person is the parent of an infant under one who was fine right before

or a few hours or day before they received the vaccine.

Note:-it has only been since 2001 that mercury (thimerosol) was removed as a preservative from  chilldhood vaccines. Of course before that doctors and vaccine manufacturers and the cdc claimed it was in a "safe" amount. (and again, you can find many sources on this by just searching the subject).

I know this is a volatile subject. I guess I am just trying to say, we have got to stop judging each other and try to be more understanding, listening to each others concerns and reasons. There usually is not a clear black and white answer to any of this.

"If you walk the footsteps of a stranger, you'll learn things you never knew. Can you sing with all the voices of the mountains? can you paint with all the colors of the wind?"
Report Inappropriate Content
Message 35 of 72 (326 Views)
Reply
3 Hearts
violann
Honored Contributor 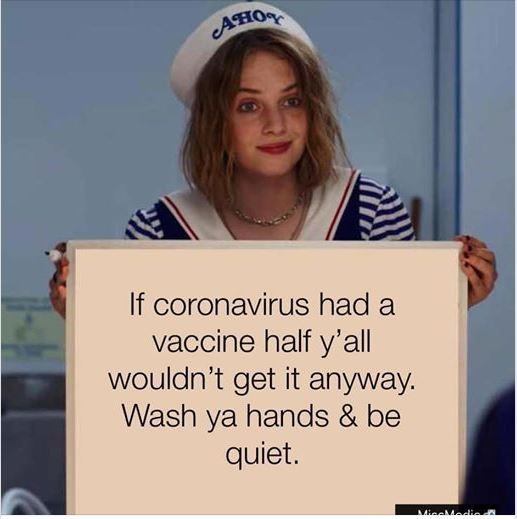 It's a little too early in the morning for me to figure out the complexities of either the global issue or the depth of your message, @CindyNC, but no matter, I LOVE THIS VISUAL!

Adding- Difficult, painful, inexplicable circumstances are capable of bringing out the BEST in us or the BEAST in us.

One of my Lenten projects was ALREADY to work on trampling my BEAST, and I cannot criticize the choices made by others, but I CAN rally those whom I encounter to stay brave, follow hygiene guidelines, and keep up with published policies when they reflect changes in awareness of circumstances.

I am heartbroken that some of the people posting here have suffered so, and hope that all of you and your LO's stay safe and well as information gathers about what we need to do to maintain our individual and group health.

Hope these statements are trampling my personal BEAST, and expressing my BEST.

If your doctor recommends you not get a flu vaccine then you are wise not to get one.

In the past six months, two of my family members have received organ donations.  Vaccines are for saving your life and the life of others.

CLEVELAND — Longtime Cleveland Clinic cardiologist, Dr. David Taylor died February 5th from a complication of influenza. The doctor had received his flu vaccine, but unfortunately the vaccine is not 100% effective and the 60-year-old physician succumbed to a rare infection from the illness.

He was also a professor at the Cleveland Clinic Lerner College of Medicine, Case Western Reserve University and a former Director of the Heart Failure and Transplantation Fellowship.

"Dr. Taylor was internationally recognized in the field of heart transplantation and served as Past President of the International Society of Heart and Lung Transplantation.  He was an outstanding leader and gifted teacher, highly respected by his colleagues and committed to his patients. He saved the lives of countless patients and will leave a lasting impact on them, as well as the many colleagues, trainees and friends he has touched over the years," the Cleveland Clinic said.

My employer would offer the flu shot and people would refuse because they believed the shot would make them sick. I never turned it down because any preventive measure seemed worthwhile to me. At most, my arm was sore.