Auto-suggest helps you quickly narrow down your search results by suggesting possible matches as you type.
Showing results for
Search instead for
Do you mean
Reply
Topic Options
Icegoddess
Esteemed Contributor 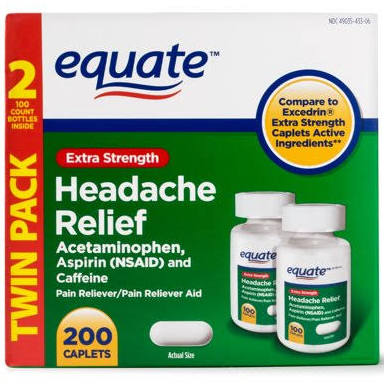 @on the bay  I'm currently taking the Kroger variety of Excedrin migraine since the store was out of it when I needed to get some back around the first of the year.  It doesn't seem to be as good.  Maybe it's placebo effect or just mental. But not all generics or, in this case store brands, work the same in everybody (I gave an explanation of that in an earlier response).  Just like I can take Levothyroxine and Synthroid and can see no difference yet other people can only take one or the other.

Also, as I said earlier in another response to this post, do we know that these store brands aren't being produced in the same facility?  The Excedrin box doesn't say where the product is made, only that it is distributed by GSK.  If they're made by the same facility, I would expect that they, too, would discontinue production until the problem is fixed.

Regardless, I'm good.  I am stocked up on my overpriced name brand product.

@LipstickDiva, no problem!  Pharmacology can be tricky at times and what might appear obvious to some really isn't the way it appears at all.  One reason most of us in healthcare alway stick to the advice of consult a pharmacist or a specific healthcare provider.  Especially when someone's complete medical history isn't known.

I take Excedrin Migraine on occasion as well & thankfully have a full bottle right now.  Should last a while since I don't have to take it very often.  I hope those that use it are able to switch to another supply that is out there.

Hope you have a great day!