@Big Sister  I decided to type on the screen, as using the keyboard was just slowing me down. Did try the oral dictation, but it was one long sentence because I kept forgetting to say period, comma, and exclamation mark!  🤣

After the open air museum, we went to the Narukawa Art Museum. Here we were able to view traditional Japanese style paintings. This is by Lake Ashli in Hakone. 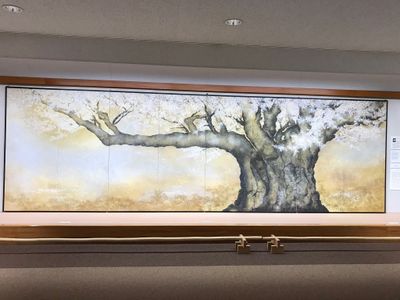 This is a huge wall this painting is on, done in panels. 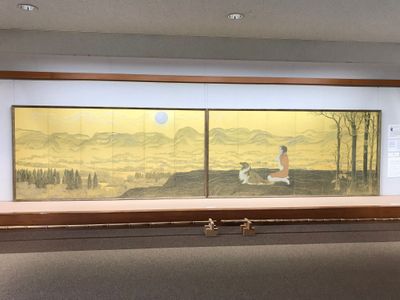 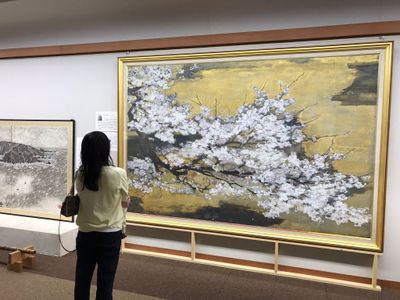 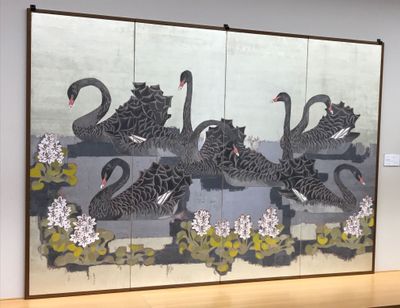 These are real masks, not paintings. 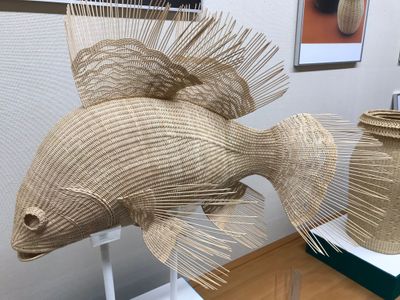 Made out of basket material. 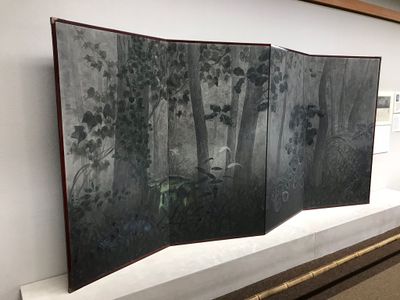 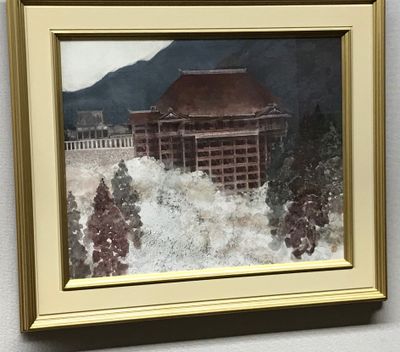 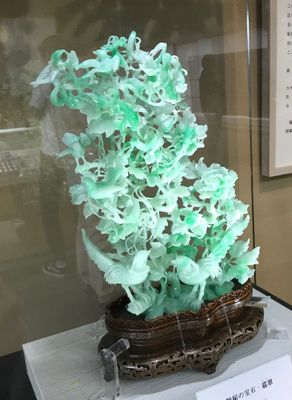 Also in this museum is this large jade.

This is a priceless piece of ivory that China gave to Japan. It can’t be reproduced because of the laws on taking ivory. It is so intricate. Check out the closeup of the people in this artwork. 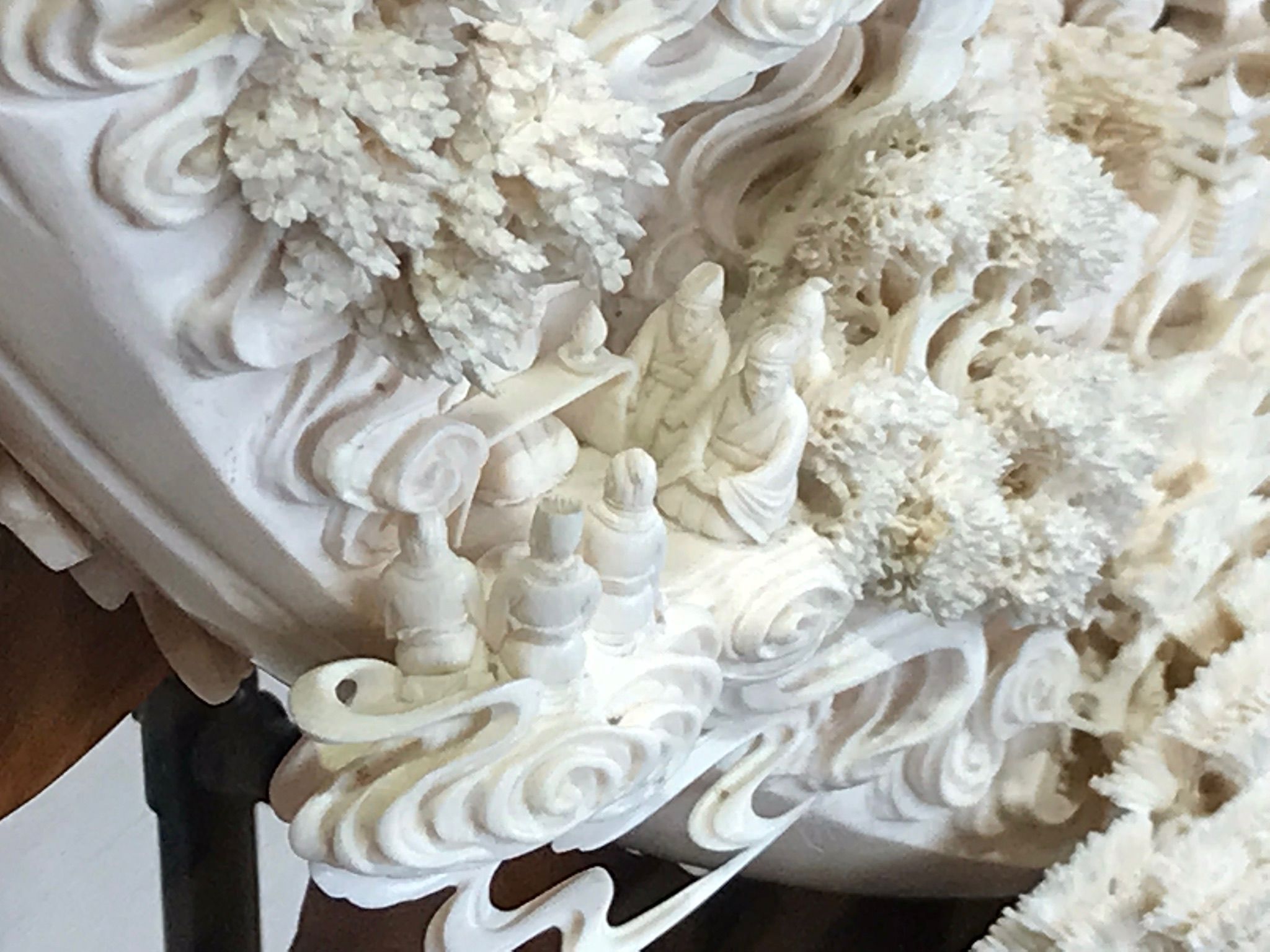 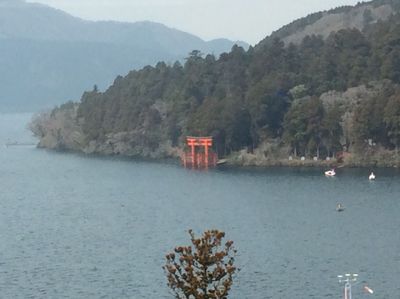 Views from the museum. 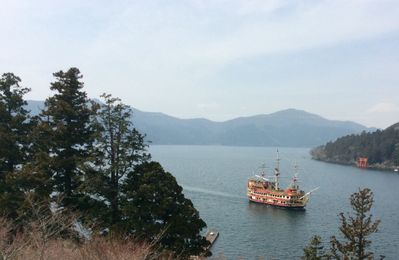 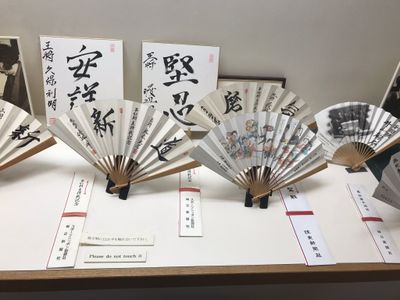 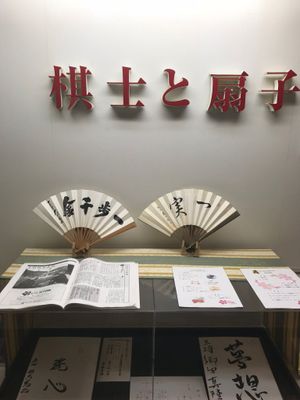 What is the temperature like there?  Have you had anything to eat yet that made you think "oh my, I just don't like that"

@CoffeeNut. Temperature has been wonderful, around 65, cooler at night. A couple of days it was closer to 70. We are now 3,000 feet high, so it is around 50 at night, but nice during the day. We are so fortunate to have no rain, so far.

As to the food, I will not eat raw meat. They offer so much of that. That  pretty much leaves out the chance I say something rude about about their food. 🙂  I stay with the vegetables, fruit, and noodles. And ice cream, of course!

Today is March 28, Wednesday, and we are heading out, leaving the beautiful Hakone area. We will be taking a bullet train, which travels up to 200 miles per hour. We will have our lunch on the train. We will be on it for one hour, then get on another train and be on that for one and a half hours; totally a transfer day with stops in between. We are heading to Kanazawa.

Our group was supposed to be 16 people, but one had to stay home due to health issues. Of the 15, there are four married couples. That means the four men pretty much don’t have a say with any of us women. Majority rules! 🤣

Everyone is over 50 and they are an active bunch. One guy is getting over knee surgery, but he is doing quite well and doesn’t hold us up.

We are all opinionated, but get along very well. Religion and politics do not come up, which might divide us, and I think that helps for our getting along. We discuss politics and religion when it comes to learning about Japan, but that is where it stops.

Everyone is on time, thank goodness! That can cause a rift if we are always waiting on someone. Virtually everyone shows up early when we are given a time to meet.

So far, the beds and pillows have been hard and my neck is complaining. I miss my Sleep Number bed and Lori Greiner’s bamboo pillow!

Each morning here in Hakone I have had a huge beetle share my room.......Japanese  beetle? Ha!  The first night it was shown where it should be, outside. This morning I had to be a bit firmer, and it traveled down the toilet, bypassing the heated seat!

Oh, that reminds me....at the restaurant for lunch yesterday, the restrooms had heated seats! So, it is not just a house and hotel bathroom thing. Hmmmmmm. Nice!

We took a short cruise yesterday on Lake Ashigarashimo-Gun to Kojiri. We thought this would give us super great views of Mt. Fuji. Wrong! She (that’s how they refer to the mountain) was hiding behind clouds. She is said to be shy and doesn’t always show herself.

Forgot to mention about the Japanese view on bacon and eggs.

Eggs.......they do not like them hard. If you see an egg that looks like it is hard boiled, it probably isn’t. Having it runny lets them know that it is fresh. If it is hard, they don’t know if it is fresh.

Bacon........they do not want crispy bacon. They wonder what people are trying to hide by frying it so long, it is crispy. Is it old? They like their bacon soft.

Forgot to mention about the Japanese view on bacon and eggs.

Eggs.......they do not like them hard. If you see an egg that looks like it is hard boiled, it probably isn’t. Having it runny lets them know that it is fresh. If it is hard, they don’t know if it is fresh.

Bacon........they do not want crispy bacon. They wonder what people are trying to hide by frying it so long, it is crispy. Is it old? They like their bacon soft.

I’m sorry, but there is just no way I can heart this post.  Limp bacon 🤢

I literally just watched someone comment on eggs in Singapore - sounds a lot similar.  Said was almost like soup - looked very watery.