Also adding that Dorit looks like a million bucks in that swim suit. She really has a great figure!

Rinnas boobs look so unnatural and strange....did she have them done again?

I think Dorit knew Lisa wouldn't be happy about returning the dog and just didn't want her to know so they brought it to a shelter. If the dog really did bite then I can understand returning it ..they should have told Lisa and brought it back to her.

Lisa seems to be past this show. Does anyone know what that terrible argument was between Lisa and Kyle in the opening? I think this might be Lisas last season.

Erika was very laid back this episode.

I think Teddi knew exactly what she was saying when she said WINNING..I think that was planned.

The view from Teddis new house is fantastic but I don't like the house itself at all...it looks like an office to me.

Kyles house is very nice. I actually like her original house the best (the first house she had on the show).

what the heck is the low cut dress that lisa rinna is wearing in her confessional?

@Sunshine45 no kidding.  Did she get her breasts done?  Or redone?  They sure are front and center.

I only saw about the first half hour of the show.  My Dh decided he had to keep talking to me about stuff so I gave up.  LOL  I DVR'd it and I'll try and catch it on my lunch.

I want to know what in the world all that was between Kyle and Lisa and Ken.

As a really catty side note, Ken sure does look like he packed on some pounds. time for bigger shirts and he needs to stop tucking!  Yeah, I'm not normally a LIsa fan and I'm definitely not a Ken fan.

i cannot believe that dorit gave that dog away instead of just taking it back to vanderpump dogs? what was she thinking?

i also cannot believe that people laugh and encourage a little boy to pull down his pants and pee right into a pool?

Again, I only saw the first maybe 30 minutes of the show.  I know the story with the dog but in the part of the show I saw, LVP specifically said she wasn't upset with Dorit and she was sure Dorit thought she was giving the dog to a wonderful home.  Now it seems she has a problem with it.  Did she find something else out?

I have to wonder what the real story is with that.  I have rescued my fair share of dogs and I always have to sign a contract that states that if things don't work out, I am to contact the rescue to make arrangements to return the dog to them.

Also, that dog that LVP had that Dorit gave away looked like a puppy.  Puppies bite and ****** and scratch.  I don't know why but I get the feeling Dorit is one of those parents who would let her kids do whatever they want with a dog and expect the dog just to take it.  They don't teach their kids respect or how to properly play with and touch a dog.  They let the kids pull the tail and ears, take food away from the dog, etc.

Wow....That's probably the best first episode of any housewife show I've ever seen.  They got right into the major issue for the season.  I didn't think I'd really care for Denise Richards but I really liked her in the first episode.

I'm not well versed on adopting animals from animal resue centers, etc. but I didn't realize there were strict rules about returning the animal back to the center if there was an issue with the dog.  Personally, I probably would have returned it to the place where I had gotten it but if I felt I found it a good home, I would have thought that would be fine.  Of course we're talking about PK and Dorit and I don't really believe much that comes out of their mouths.

Speaking of Dorit, she was bad mouthing Teddi saying that Teddi knew about the snafu with the dog return and was afraid Teddi would tell everyone and twist things around like she has done to her in the past.  Teddi hasn't twisted anything around about Dorit.  Dorit was an hour late, etc. last year.  This is the reason I don't believe much of anything Dorit says.

Knowledge is knowing that a tomato is a fruit, but Wisdom is knowing not to put it in a fruit salad.
- Author Unknown
Report Inappropriate Content
Message 15 of 667 (1,866 Views)
Reply
5 Hearts
JeanLouiseFinch
Honored Contributor

I agree that it would have just made more sense for Dorit and PK to bring the dog back to VDP Dogs.  I'm sure they didn't want to face the interogation and giving it to someone seemed like the path of least resistance (although what would they have said if/when Lisa and Ken visted and the dog wasn't there?).  Even though I don't like Dorit and PK, I imagine they were just as surprised as anyone when it didn't work out at the second home and the dog ended up in a shelter.  Because they didn't follow the proper process, they were on the hook for a $5,000 fee to VDP Dogs, as stated in the contract.

I did not like Dorit last year at all, for a number of reasons.  So far, I don't see myself liking her much this year either.

Kyle's shorter hairstyle is very flattering on her.

As for the blowout between Kyle and Lisa, I'm waiting to see what happens there.  I think we all are.  Apparently they still aren't speaking.  From what I've read online so far, the cast thinks Lisa leaked the dog story but then acted like she didn't.

The view from Teddi's house is gorgeous, but don't love the house itself. Also Kyle's new house is ok, but I loved her last house,it was cozy and had a gorgeous backyard. It kind of reminds me of Tamara Judge's houses. Her 1st house had that fabulous backyard, and then they moved and her new house is ok, but the backyard is lacking-kind of the same with Kyle...

Dorit and P.K. seem like they will lie and twist stories until it suits them. For some reason I don;t trust either of them....I used to really like Dorit, but now not so much......I think Lisa V is done with this show as well, and this will probably be her last season....

She has her hands in lots of other lucrative things, so she doesn't need this show.....

Erika is excited when Lisa Rinna introduces her friend, famous actress Denise Richards, to the group.  Lisa Vanderpump struggles to come to terms with her grief after a personal tragedy. At Kyle’s pool party, Dorit is concerned that Teddi will twist information about her family’s dog and use it against her. 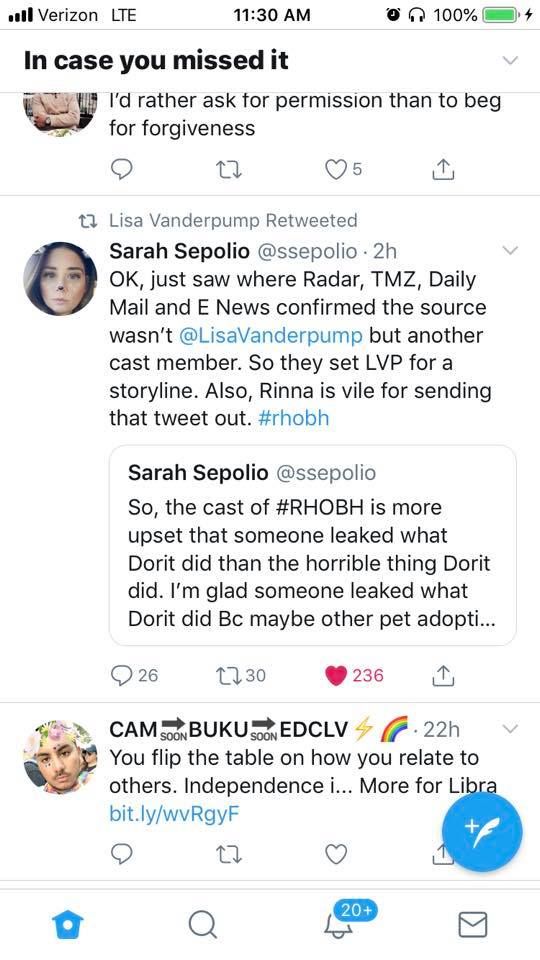 I think Kyle looked better last night than she has in any season.  Just fantastic.

The LVP dog drama was all dragged through the mud in real time.  Really, it was probably all very innocent and in real life just moved on, but they need drama for the show so they are blowing it up.

Also with LVP, again, she has had a very busy year opening TomTom and I want to say working on something in LV, also, plus filming VPR, so I'm quite confident that is the reason she couldn't make it to anything for RHBH.  It is at the bottom of the things on her to do list.  Girlfriend loves to throw a grenade and then sit back and play victim.   Again, not dismissing her loss, I completely sympathize with that, but think she played that so she didn't have to appear.   Ken just needs to stay in the background altogether.

Who was it who was peeing in the pool?  I missed who it was but saw Maurcio's disgusted face.  I thought they were talking about a dog?

Dorit and her husband are a joke IMO.  And why the constant need to let people know what "George" is doing.  Does anybody really care?