Hey, I missed the fact that a good chunk of Wednesday's TCM schedule is devoted to films set in Egypt!  So in addition to "Caesar and Cleopatra" there's "Cairo",  "Land of the Pharoahs" and "Valley of the Kings", among others.

No romantic-adventure is lessened by the presence of the endlessly cinematic Robert Taylor.  Here he's an archeologist who joins forces with the equally photogenic Eleanor Parker to recover treasure in ancient tombs, and find an intense rapport along the way..

There is absolutely gorgeous  cinematography of the magnificent Egyptian locations  to savor in this as well as the suspenseful adventure.  Epic fun! 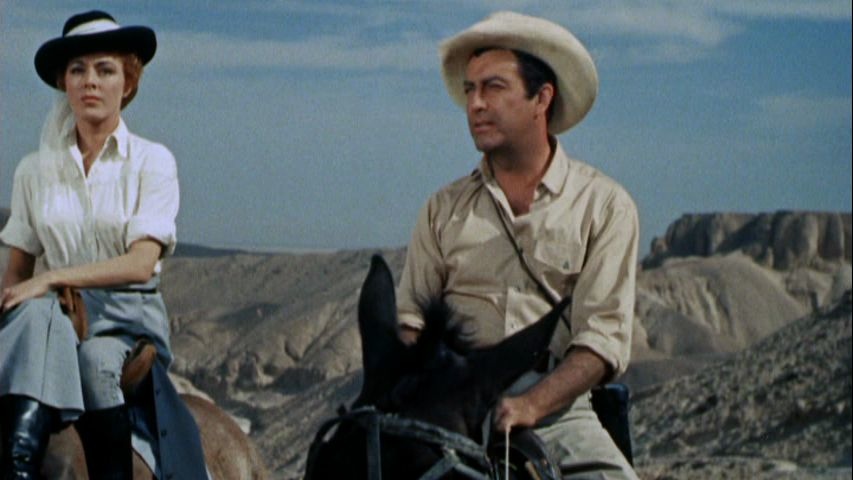 I always enjoy these movies because of the lovely scenery and escaping into the plot which is always entertaining and enjoyable .The Valley of the Kings is a good one and while i have seen it a few times, will DVR it.

I did check the TCM shows as the biblical movies are on at this time of the year.  I also love them and seeing The Ten Commandments is my tradition for Easter.  I am happy I can DVR it to fast forward through all the commercials.  The movie is long enough without constant commercials adding to it.  King of Kings is also a must watch for me.

These are movies I saw when they came out and were extravaganzas, lots of popcorn and bon bons!!!!!!

Don't want to miss seeing Robert Taylor in a movie. Ever since I saw him in Waterloo Bridge, I can't wait to check out his other movies.

As I recall, that was a good movie.

@spiderw, yeah, the Biblical epics also are so great to revisit this time of year.  Plus, there's more of those hauntingly beautiful locations and backdrops...

In "The 10 Commandments",  I love the look they achieved for Anne Baxter as "Nefretiri": 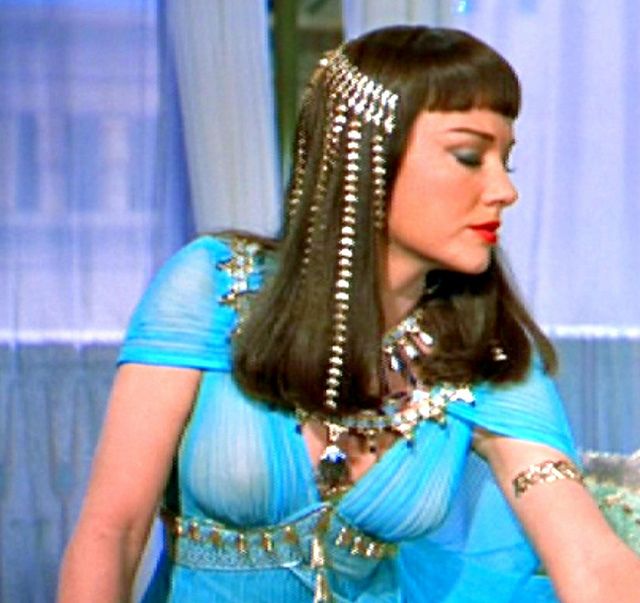 Read somewhere that she worried a bit about going over the top in her performance;  she asked Cecil B. DeMille, the director, if it was too "campy".  But, according to her, he loved it and egged her on...

I forgot to say thanks to Oznell for posting this. I've been wanting to see Joan Collins play the meanie in this oldy film and when I would go to order it from catalog would be pricey, now, I can TIVO it for free. Seen it before, but, now I can keep it if I want too.

I'm counting on you ! LOL

(Land of the Pharoahs)

Best 'Cleo' pic was of course Liz Taylor. I bought it. When she comes riding in on that gold platform with her son from Julius Caesar and the crowd is waiting to see who bows first . She as a Queen or he as Emperor of Rome.

The crowd quiets down , then, LIz and her son both bow and the crowd goes wild because she has not insulted Rome . Great scene !

And Tom Jones' speaking voice, as well as singing voice, is no slouch either, @Sharke!

Oh, Alexander Scourby, great example of a memorable voice, @Somertime.  He was so good in "The Big Heat".

In fact, I like Glenn Ford's voice from that movie too.  He was so frustrated and tormented as an honest cop, his voice was an urgent growl most of the time...

I have so many 'cinematic' voices I love.  Joseph Cotten's is another one-- he could ring so many subtle changes with his...