that's when Phyllis has that Dr. (shrink) do something to Christine I forget what he did to her. Drugged maybe ? run over her something like that.

Phyllis has been a psycho for as long as Adam has.

"CBS will air a classic episode of Young and Restless featuring Paul and Christine’s honeymoon."

It's now been made official... They've lost their minds...

Oh, Lord, I wonder if that's the one when Phyllis put an octopus in their honeymoon bed?

I may be in the minority but I find watching classic episodes bittersweet. Bill Bell could really weave a story. Yes, when you talk about some of the storylines, many were out there. But, they were so bloody entertaining. Next week is the Grand Dame and I for one can't wait to see her mix it up with Jill.

I may be in the minority but I find watching classic episodes bittersweet. Bill Bell could really weave a story. Yes, when you talk about some of the storylines, many were out there. But, they were so bloody entertaining. Next week is the Grand Dame and I for one can't wait to see her mix it up with Jill.

Agree, despite any alleged foibles, Bell knew how to write soaps. HIs stories were crafted, interwoven and compelling, unlike the superficial slop we're seeing now. Agree also on the glory days of Jill and Kay. I hope they'll go back to some of the scenes featuring the original Jill, as those two really knew how to blow the roof off with their mutual loathing... The current Jill might (or might not) be a better actress, but the original Jill was a better Jill, simpering,conniving, vamping and flouncing around in her lynx coat, and her fantasies of revenge against Mrs. C were legendary... 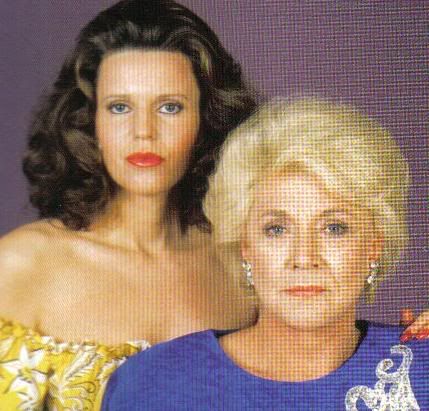 i just ended up getting interested in the recent storyline of Victor/Adam and the murder.........its been a while since any of the storylines held any appeal..........and now the show is

I keep missing most of these shows...  Everyday the Gov comes on and says the same thing:  yesterday he added, no more school this year then had several people talk about it, yada, yada; today, same but with admins talking about not enough people going to hospitals and ERs.  Seemed they were recruiting for non-covid patients (income must be going down!).  Did get to see a little of Witchatoria doing her thing and the ending with poor Victor and Nikki.

I really don't understand why they don't replay the March-April shows before going into the oldies but goodies. If it weren't for @loveschocolate , I'd have no clue what's been going on - interesting or not. And as @kelsey17  said, I too,  was interested in the Victor/Adam murder SL.

@goldenlocks  Whether they broadcast more current or older shows, odds are they are going to be interrupted. The daily updates around here have been later in the day. Your best bet would have been to pull up the shows you missed and really wanted to see on demand. You might still be able to do so, I don't know how your cable company works. The CBS website might still offer some of them too.

I think the show will lose more viewers after this. While I agree Adam is about the only interesting thing this show has right now, even he and Victor haven't been enough to have me watching consistently and while I might catch a few of the old shows, not interested in a steady diet of them. If soap writers for all the shows don't come up with some real blockbusters to draw viewers back in after the hiatus when these shows resurface, I'd predict some cancellations will be coming up.

The Young and the Restless is pre-empted today and the episode featuring Paul and Christine’s 1996 honeymoon in Nevis was broadcast. Below is a recap of this classic episode that predates Soaps.com’s days of recapping.

In Nevis, Paul and Chris lounge by the pool. Elsewhere, Phyllis is swimming in a pool and hollers at Dr. Tim Reid to come in. He’d rather get drinks. Phyllis spots Chris and Paul walking off and ducks underwater, so they don’t see her. She can’t believe they’re there and whispers, “You’ll be very sorry, Christine.” Phyllis joins Tim and considers leaving. He’s puzzled. She decides to stay…it could get very interesting. Phyllis tells Tim she’ll meet him later and runs off.

Cole Howard arrives in the tackhouse holding a green bikini and looks thoughtful. In the bed, Victoria stirs. She’s surprised Cole’s not in Boston. They discuss his research with Nina Webster going well and Cole asks if all she did was work while he was gone. Victoria shrugs, “Mostly.” He holds up the swimsuit and asks, “Did you lose your bikini, Vikki?” He questions her returning to the tackhouse without it and she bristles. He tried calling her last night but couldn’t reach her. Nina couldn’t reach Ryan either. Vikki wonders what he’s getting at. Cole muses that he needs to shower.

At Newman Enterprises, Victor calls the ranch. Miguel answers, “Abbott residence,” and Victor asks if he knows where Nikki went. Miguel thinks she preferred no one knew where she was going. Victor disconnects and wonders what’s going on with her…why the mystery? Nick arrives to ask about becoming Neil’s assistant in Copenhagen, but is really there about Sharon. They want to celebrate their six-month anniversary with family. Victor would like nothing better but warns Nikki’s out of town. Victor’s puzzled that Nick doesn’t want to postpone.

At home, Ryan McNeil flashes to Victoria swimming – she wanted him to join her and dispensed with her green bikini. Nina comes in, back from her trip, and kisses him. She quizzes him about her son, and he asks about Boston. Nina raves about working with Cole, then asks what Ryan did while she was away. He just worked.

Sharon arrives at her mother Doris’ house and informs her she’s going to a very special party – she and Nick are going to announce they’re having a baby. Doris doesn’t seem convinced it’s a good idea. Sharon assures Doris that her marriage will be okay.

Paul feeds Christine fruit on the beach in Nevis and they share a toast as Phyllis spies through binoculars. Phyllis heads up the beach, talks to a worker, then smiles. When Paul and Christine head to their suite, Phyllis lurks, then stops a maid for a key. While Paul and Christine shower, Phyllis enters holding a bag and tiptoes to the bed. After, Chris exits the bathroom, slips into bed and screams. Paul comes running and discovers an octopus in the sheets! Meanwhile, in another suite, Tim asks where Phyllis has been. She feels he wouldn’t believe her if she told him. Back at Paul’s suite, the hotel manager assumes the octopus was a prank and goes to see what he can find out. Elsewhere, Tim presses Phyllis as to where she went – she’s grinning like that cat who swallowed the canary. Phyllis smiles, “That’s exactly how I feel doctor, like one happy pussycat.” Later, Chris and Paul won’t let what happened spoiler their honeymoon. They kiss and he carries her to the bed to make love.

In Victoria’s office, Nick questions Victoria about Nikki’s trip. Victoria thought she may have been with someone, but now thinks she’s alone. Nick hopes she’ll be back for his and Sharon’s get together. Victoria wonders what’s going on – she thought they were having a private celebration. Talk turns to Victoria’s husband being back. She admits he’s not too thrilled with her right now. Victoria swerves back to Victor being more interested in Nikki than he lets on. Nick’s distracted so she exits. Later, Sharon arrives, and Victoria asks the occasion for their party. Sharon reminds her they’ve been married for six months and gets the sense Victoria’s studying her. Victoria knows thing have been rough for them lately. Sharon insists the dinner party is to show the family how together they are now. Victoria’s suspicious.

Lauralee Bell hopes viewers enjoyed the classic episode and invites everyone to watch next week for episodes with Jeanne Cooper as Katherine Chancellor.

Next on The Young and the Restless: