I think the show is gonna flop...they should have just cancelled it and let it go at that.  Damage control is not going to work out.

@CARMIE  I think the show will flop, too.

The rest of the cast is mediocre at best.

I'm guessing that the main reason they decided to go on with the show after Roseanne was fired is because they would've had to pay the cast even though the show was cancelled. So one way or the other, ABC would've been out alot of money.

According to The Hollywood Reporter, the show’s central cast members — among them Sara Gilbert, Laurie Metcalf and John Goodman — recently negotiated new contracts for the 11th season worth $300,000 per episode, a $50,000-per-episode payrise from season 10.

And despite the fact the season won’t go ahead, they could still expect to be paid for at least 10 of the 13 nixed episodes, given their contracts would have required them to turn down other potential work that would have clashed with the filming of the next season.

And while ABC may try to wiggle out of that contract given the extraordinary nature of the situation, the cast will “lawyer up if they have to,” The Hollywood Reporter quotes a source close to the show as saying.

The Roseanne writers’ room for season 11 was running for only one day when the show got axed, and those in the room face less certain financial futures than the main cast of Roseanne.

Most will have been on agreements that mean they’re paid per episode produced — that’s zero eps, in the case of season 11. However, Roseanne’s writers are expected to push for at least some compensation for the show’s untimely end, given that many would have passed on other work opportunities to take the job and other shows in production at the same time are already staffed.

A sad way to start a comedy.....I really don't know what else they could have done to try and salvage the show. I’m not sure I believe Roseanne - she has nothing to do with the show, so how does she know how she dies? Maybe it is due to opioid addiction, but is cleaner to have her die in the surgery they already have planned for her. Maybe there is a complication because of her pre-existing addiction?

At any rate, I agree that there is no show without Roseanne in the center. The other characters aren’t drawn as strongly. It’s been suggested that Darlene will take on that role and, although I agree she would make the most sense, she is also very unlikable (IMO).

I’m not sure I believe Roseanne - she has nothing to do with the show, so how does she know how she dies? Maybe it is due to opioid addiction, but is cleaner to have her die in the surgery they already have planned for her. Maybe there is a complication because of her pre-existing addiction?

At any rate, I agree that there is no show without Roseanne in the center. The other characters aren’t drawn as strongly. It’s been suggested that Darlene will take on that role and, although I agree she would make the most sense, she is also very unlikable (IMO).

@Alter EgoUGH, Darlene taking on the central role? Please say it ain't so!!

It sounds like Michael Fishman (D.J.) will have more screen time this season.....

A new ABC Tweet has revealed that at least one member of the Conner family is set to be recast for the spinoff. D.J.'s wife Geena will played going forward by Maya Lynne Robinson. Robinson can be seen below, alongside D.J. actor Michael Fishman and actress Jayden Rey, who plays their young daughter Mary. 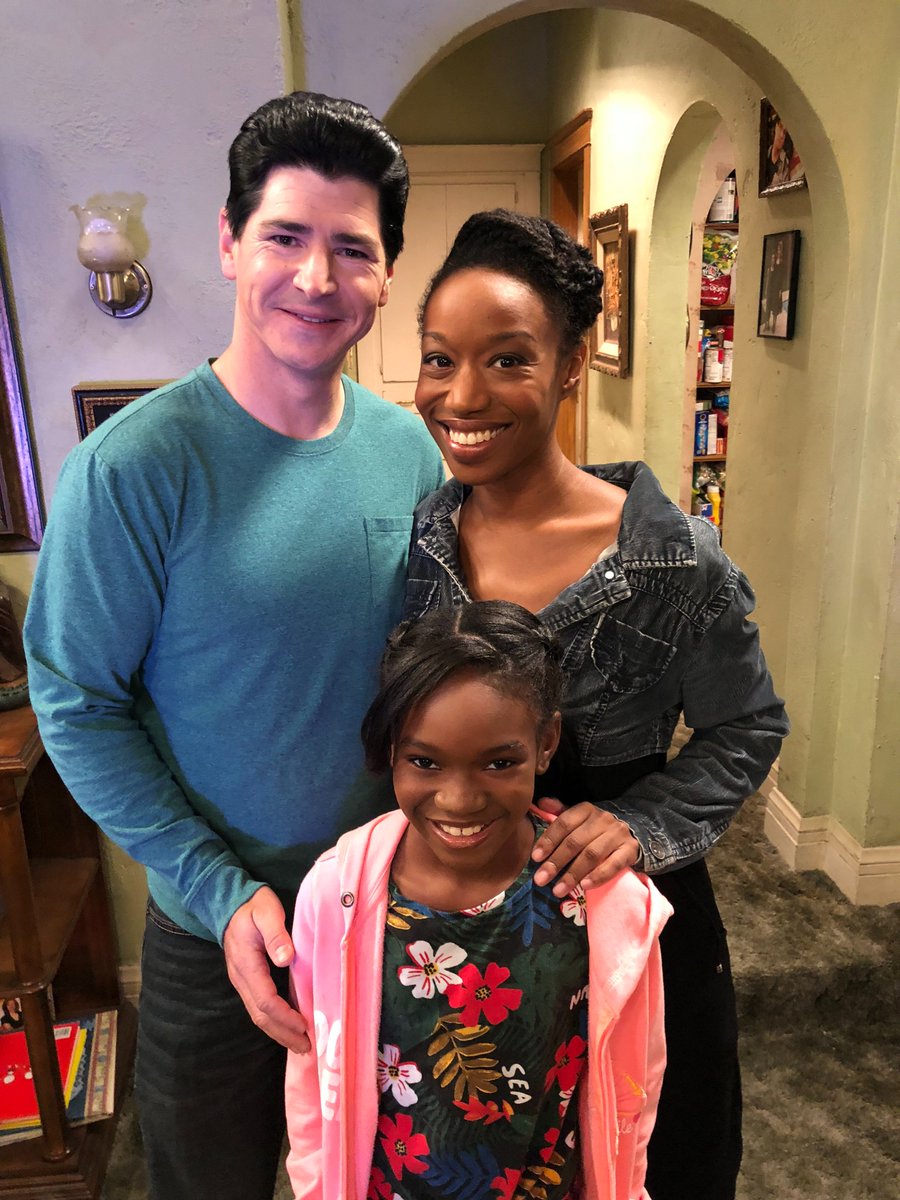 Geena Conner was previously seen (played by actress Xosha Roquemore) via a Skype call during the Roseanne revival, as the character was serving in the U.S. military. She's now set to be a series regular, so one assumes she'll be returning home early in The Conners' first season. No reason has been given as to why producers decided to recast the role. While Geena has only been seen once as an adult, longtime Roseanne fans will remember that she and D.J. first met as kids, in an episode where D.J. was reluctant to kiss Geena in a school play due to her being black. Obviously, he got over whatever prejudice he might have had then.

I'm looking forward to it.  I thoroughly enjoyed the revival and I'm interested to see how the writers deal with her absence.  There is a lot of talent on that writing staff based on last season and I'm glad they are getting the chance to do a season 2.

I was thinking she'd be a goner on the surgical table especially when she's all doped up like that.  Anesthesia on top of opiods usually doesn't end well.

I'm sorry - but the whole reboot and the Roseanne saga is just stupid. Put that show to rest!

Alter Ego, I think you have called it!  Having RC die during surgery is far less heavy than having her overdose on opioids.

I never watched the old show, nor did I start up with the reboot, but it was John Goodman who recently revealed they would kill her off. I didn't know it was from opioids, but someone said before the whole thing crashed and burned that they introduced her use of opioids or some other kinds of drugs  into an episode? Is this true? If so, they were expecting to deal with that issue anyway.

The entire show is just no longer a comedy.... it is just a train wreck.  People will watch the first show to see Rosanne die off... and then all the interest will wither.

An overdose definitely makes sense as an end for the character; Roseanne was revealed to be hooked on opioids during Season 10. In the penultimate episode, Dan discovered that his wife was hoarding pills and hiding it from the family because they couldn't afford the surgery she needed. It seemed like her addiction would be a running storyline in the next season, but now that Rosenne has been fired, it's apparently how they'll end Roseanne's life.

Rosanne Barr was not happy with the way her character was written off though, calling it an insult to fans of the show. "I was never going to have Roseanne die of an opioid overdose.

It's so cynical and horrible. Roseanne should have died as a hero or not at all," Barr said. "It wasn't enough to [fire me], they had to so cruelly insult the people who loved that family and that show."