\THE FUGITIVE "SHADOW OF THE SWAN" MONDAY 2:00 A.M. EASTERN METV 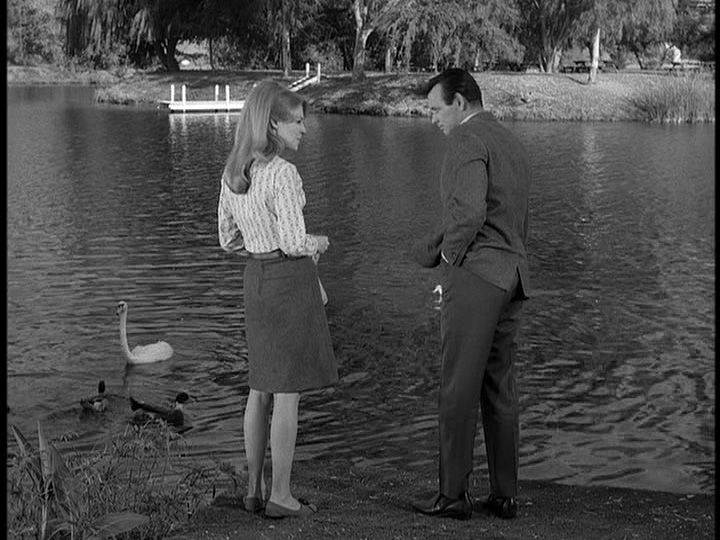 (I'd love to know, later in the discussion, if anyone noticed something "interesting" in the early swan scene....)

Well, Kimble crosses paths with yet another "problematic", manipulative woman, (Joanna Pettet) who seems to offer help, and brings trouble.  Her uncle, (Andrew Duggan) discharged, "for cause", from the police force, has questions about Kimble, and something to prove. 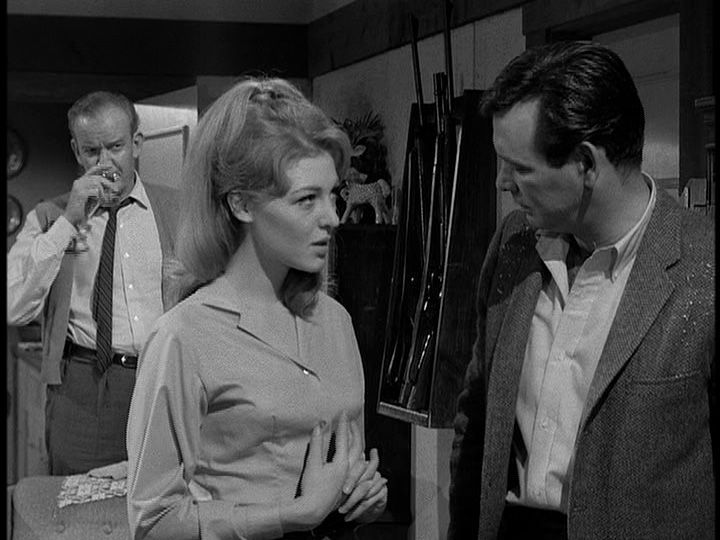 It's the second episode in a row that I personally, am not really fond of, although interested, as always, in any and all opinions.  There are shades of the 'Tuesday Weld' episode, as well as the 'Angie Dickinson/Robert Duvall' one.  Multiple "Fuge" performers Andrew Duggan and David Sheiner are reliably good, and Don Quine makes a repeat appearance as well. 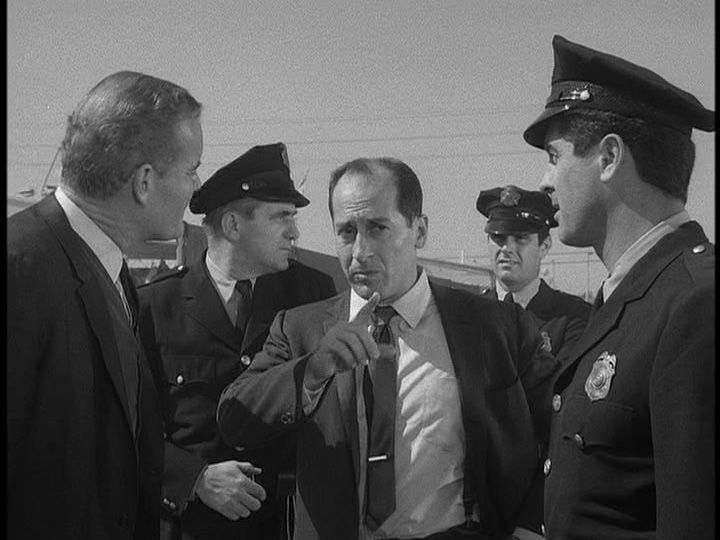 For me, the knowledge that next week's episode, a very well-done, suspenseful "family reunion" of sorts-- "Running Scared"--  is upcoming, has kept me going!  And even after that, as we wind down Season 3, (can't believe it!), there are bright spots coming.

Speaking of the season winding down, if any viewers or thread readers have a favorite of the season so far, or a "least-liked",  feel free to add that to the discussion.  That would be fun!  Should anyone prefer to wait till all have unspooled, that's fine too, but either way is enlivening and fine.  Need a refresher on what we've seen?   Google The Fugitive Season 3 Wiki, and a list of episodes with brief synopses should pop up.

Episode trivia--  The "Carole Kane" in this one is NOT Carol Kane.  Different spelling, different actress!

The Imdb site mentions that a Quinn Martin alumnus, William Woodson, plays a "carnival barker" here, and of course, he's also the weekly, solemnly intoning narrator of that other Quinn Martin production, "The Invaders".   I forgot to look for him in this very different incarnation!

The epilog stills in "Shadow of the Swan" of Kimble in yet another anonymous railroad yard, are so bleakly evocative of his ongoing predicament... 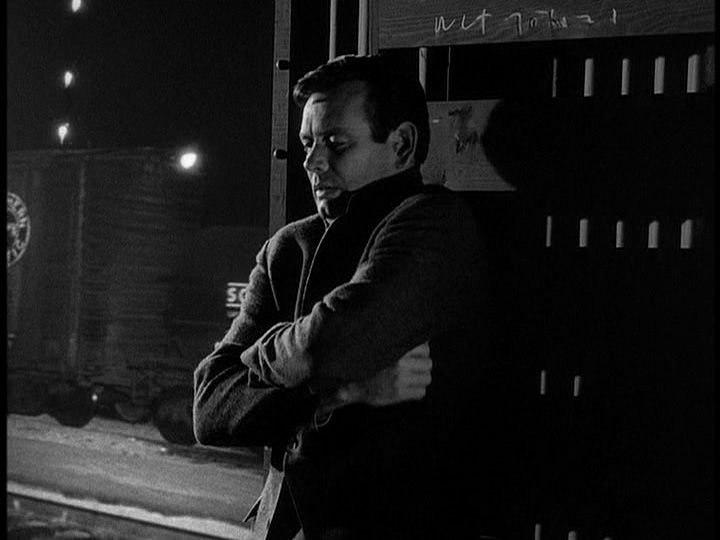 I love the way you write so vividly @Oznell  I can feel your love of film noir. I will DVR this and see if I notice

@godi,  thank you for kind encouragement--  much appreciated.   So glad you are taping the show and aboard here!

Re: THE FUGITIVE "SHADOW OF THE SWAN" MONDAY 2:00 A.M. EASTERN METV

I usually regret when I have posted knowing I had to run immediately after but I will say a few things anyway. I enjoyed this episode. The main reason may be because we got to see our beloved doctor stop and "enjoy the roses" if only for a few minutes. When he was playing that carnival game I was probably sitting with my mouth wide open for a few seconds because that was so uncharacteristic of him. But then I quickly realized: Maybe not. I am used to seeing Kimble always on guard so it was nice to see him do something so normal which he continued by walking over to the water, looking at the swan, and releasing his goldfish. For me it was a lovely start to this week's episode. Back later...

"I try to teach my heart not to want nothing it can't have." ~ Alice Walker
Report Inappropriate Content
Message 4 of 28 (396 Views)
Reply
1 Heart
Oznell
Honored Contributor

Wow, @Tique ,  I had totally forgotten Kimble playing that carnival game, smiling and full of boyish abandon!  It was a striking moment, and a departure for him, you are right.  To see him so happy, like a little boy, that was a treat.

@Tique. I wasn't going to comment until later  but your post prompts me to do so now.  I feel the exact same way. I also like this episode and love the short glimpse of Kimble smiling broadly and taking delight in playing the "knock the jugs over" game. I also like how lonely Kimble responds to the early warmth and welcoming touch (hand holding) of Pettet, before he realizes she's so psycho.

Speaking of which, this epi didn't remind me of the Angie Dickinson one (she wasn't psycho just conniving) but did about the Tuesday Weld one and also I think it was the first Shirley Knight one where the evil woman gets shot at the end at the gazebo ( is that the Gloria Grahame one? The Garden House epi?).

This epi certainly has faults but I still like it. It is ridiculous when women claim they are in love with Kimble just knowing him for a day or two (at least he said sensibly  "you don't even know me") and it's ridiculous that Kimble would risk capture just to make sure Pettet is OK (i.e. staying on the phone with her and looking for her at the lake at the end) but he does that throughout the series so it's in character. Speaking of Pettet, I googled her and she's English!

Whenever I think of this epi I immediately think of kind Kimble releasing the goldfish into the lake.

I was surprised Kimble said he had studied medicine. He doesn't usually reveal that and that makes him taking menial jobs all that more suspicious. Also I noted he didn't mention working at a kennel before (in Bloodlines, the epi with Colleen).

The actor who ran the booth where Kimble won the goldfish was in dozens of TV shows in that era, usually playing a detective or policeman. He was also in North by Northwest.

@Oznell. I don't know what you are referring to about seeing something interesting in the early swan on the lake scene. What are youvreferring to?

Next week's with Kimble's sister Jacqueline Scott / Donna Taft is a really good one as Oznell says. Much better than the one with Scott where Andrew Prine played Kimble's brother.

@Pearlee,  the thing that I thought was interesting in that scene, was that that poor swan appeared to be moving awkwardly on the water's surface-- and swans are usually so graceful.  It suddenly dawned on both of us, that they might have somehow anchored the swan, so that it wouldn't be able to leave the scene before it was finished!

That poor baby, if they had some sort of cable or cord around its foot underneath the water, it would account for the sort of "squirming" motions it was making...

If they did do that, the ASPCA probably did NOT approve!

Once again I typed my whole review and when I went to post I got the Authentication Failed message and my post disappeared.  These boards are really messed up. I'll try again,

I liked this episode.  @Tique - I had the same reaction as you watching Kimble playing the carnival game.  When he won the fish I thought he was going to tell the guy to keep it. It was nice to see Kimble acting care free and enjoying himself if only for a few minutes.

@Pearlee -I recognize that guy who played the carnival stand from other shows and you are right, he played a lot of cops.  I also didn't see anything in that swan scene that @Oznell mentioned,

I was surprised that the cop dismissed the uncles' claim that was Kimble was in town.  It was strange that they wouldn't pay any mind to a former cop.  As mentioned many times, it is ridiculous when Kimble puts himself at risk just to help someone else.  This time though, was a real stretch, since Kimble knew Pettet had issues.  That opening scene with the swans was so tranquil, certainly not a hint of what trouble was to come by his casual meeting with her.

I would watch this episode again.  There is a river flowing past my backyard, and we see swans and ducks every day going by. From now on, every time I see them I will think of DJ and this episode - LOL!

@twinsister  I'm glad you went to the trouble to retype your review because I enjoyed reading it, and am glad too that you recognized the carnival guy as playing law enforcement people in a lot of other shows.

@Oznell  Thanks for explaining. Perhaps the swan was faux?

@Oznell - I never thought the swan might be "anchored" down.  Good observance!