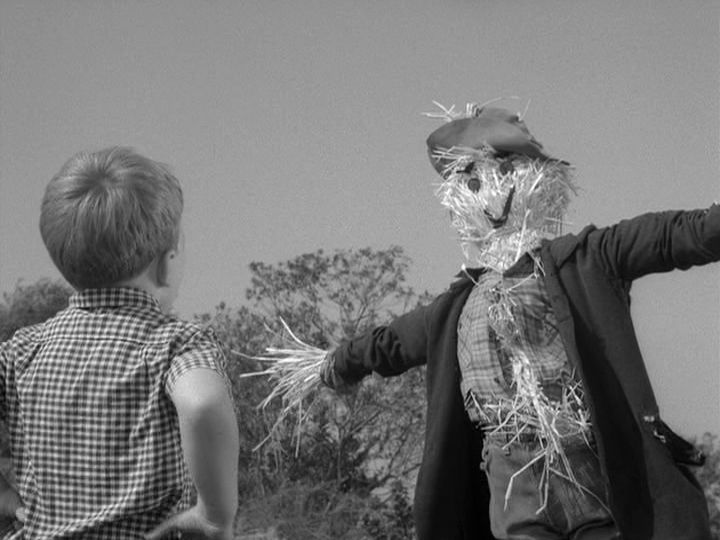 Working in a New Jersey warehouse, Kimble has a rather tough boss, "George Savano"  (repeat Fuge performer Edward Binns), and a friendly but secretive coworker, "Jesse Stansel" (repeat Fuge actor Joseph Campanella), whose savage beating by thugs outside the warehouse brings the police into Kimble's orbit. 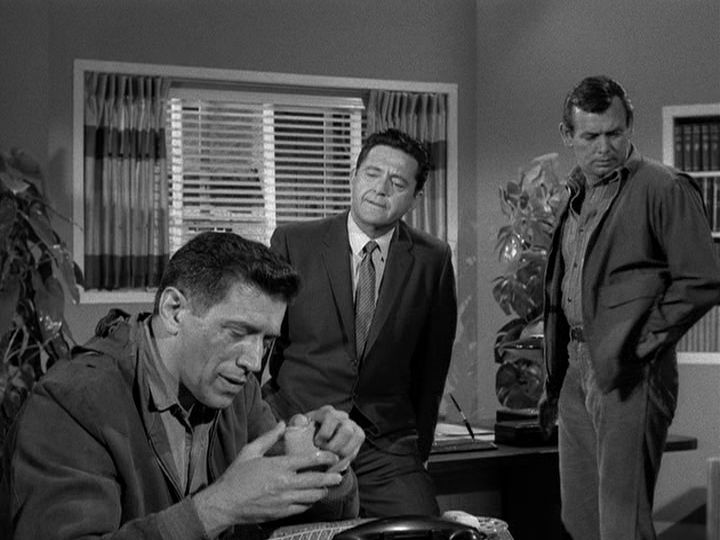 Jesse has a little boy, "Johnny" (Clint Howard), who might cause the spillage of some of the episode's secrets..... and provide another opportunity for Kimble to exercise his intuitive rapport with children. 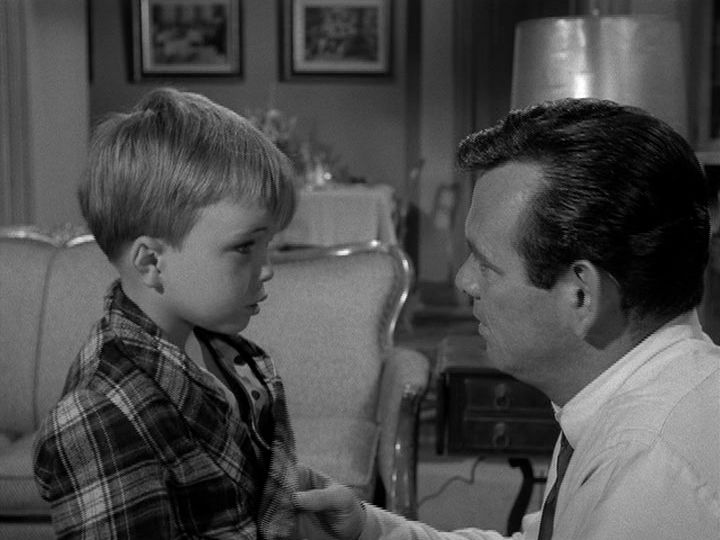 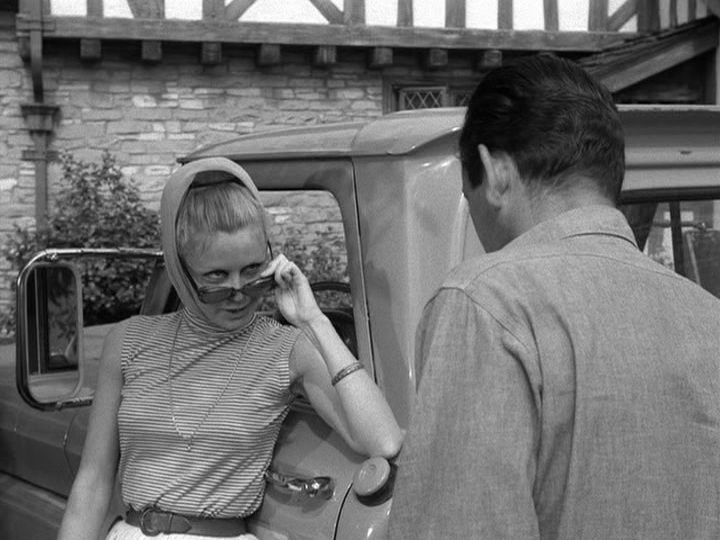 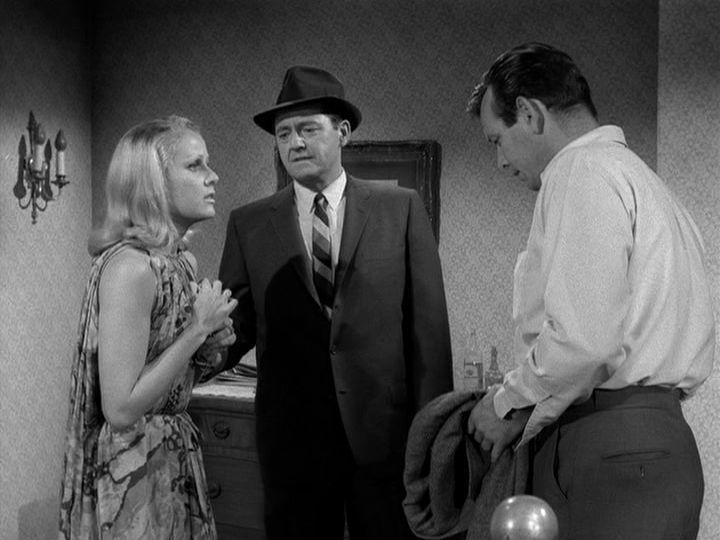 But the return outings of Joseph Campanella and Diana Hyland especially, along with Edward Binns, are at least somewhat redeeming in a rather uneven (to me) episode.  In this kind of salt of-the-earth role,  Joe Campanella's sturdy, natural warmth is effectively showcased.  The scenes of him extending friendship to Kimble at work and at home are very likable.

I always like Diana Hyland--  too bad at least two of her appearances on Fuge run along similar, shall we say, "unconventional" lines?  I'll say no more about that for now!

Personally, I'd like to have seen her cast in at least one of the shows as a viable romantic interest for Kimble.  She stood apart from many other Sixties' actresses on TV--  her plummy, vaguely pseudo- British (she was from Ohio) or "transatlantic" accent, her refinement and emotional intelligence, would have been interesting lined up with him.  The only others I can think of with remotely a similar energy were the also under-utilized Antoinette Bower or Diana Van der Vlis...

"Set Fire to a Straw Man",  streaming free on youtube:

Love her cute Sixties-fab wardrobe and jewelry in this: 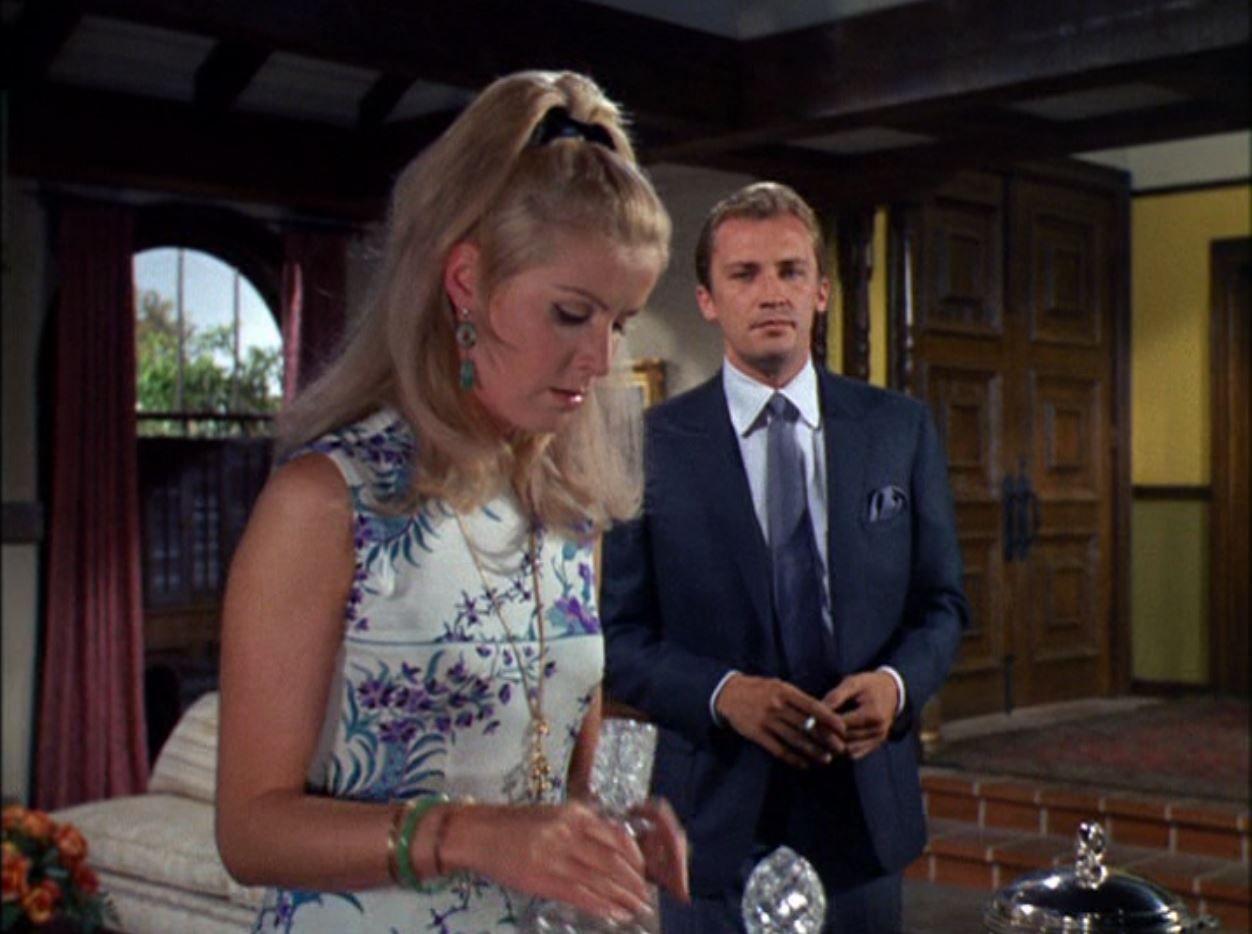 One of my favorite appearances of hers was as Jack Lord's affluent, pampered but unhappy wife in "Vikor", an excellent "Invaders" episode with Roy Thinnes.  Merely neurotic in that role, she's typically "Diana Hyland-plucky-and-engaging",  for a welcome change!   A lovely performer, gone much too soon in her early fifties...

So, should anyone want to see a quite different Diana Hyland in "Vikor", here it is streaming free on youtube:

@oznell - It sounds interesting and with a good cast.  Surprised the location is supposedly New Jersey.  I don't remember any other episode being set in the Northeast.

I like Diana Hyland. She was very good as J Lord's wife in that episode of The Invaders. I also remember her from two episodes of RFYL, where she played a kooky sixties free spirit and a widow due to the Cold War.  My favorite role was on TV in Eight is Enough.

My DVR is set.

I just remembered there was an earlier episode set in upstate New York.

I love your encyclopedic knowledge of retro TV, @twinsister !   So enriching to discussions here.

Oh, the upstate New York "Fuge" episode, let's see-- that was the one with the two sisters, one of whom was Carol Rossen, right?

I've mentioned this epi several times before, including when Hyland was in the first one, and also  when we saw repeat Fuge child actor Clint Howard before.   For some reason I remember this one really well (probably because of the straw man)  and have seen it many times.

I'm putting in the spoiler what I have mentioned before when Hyland was in the one where she was in a boxcar with a baby and Kimble jumped into the boxcar. I don't think it's much of a spoiler since it's apparent pretty early on,  but if you don't want to know anything in advance don't look

Spoiler
Diana Hyland plays a very similar role in this episode as she did in the baby epi.

By the way, what ever happened to The Invaders thread someone started? That show keeps being mentioned here but I never see the thread about it being used to discuss it.  I hope those of you who wish to discuss the link @oznell  posted to that show will do so on the thread about that show.

By the way, what ever happened to The Invaders thread someone started? That show keeps being mentioned here but I never see the thread about it being used to discuss it.  I hope those of you who wish to discuss the link @oznell  posted to that show will do so on the thread about that show.

@Pearley - I started the thread on The Invaders just to mention something to @oznell.  I honestly never thought it would become a weekly discussion thread like the Fuge, since it seems just oznell and I are the only people watching.

@Pearley,  you probably don't remember, but I think when you raised this a while back, I tried to give a glimpse of my so-called "philosophy" (ha) regarding these threads.

Of course, it's a thread on the Fugitive, that was my prime purpose.  But, in my opinion, the occasional mention of other retro shows, actors, etc. of the period, is very enriching and doesn't take away from the main purpose.  I wouldn't want anyone to feel "prohibited" from doing that, just like no one should be prohibited from bringing in things like the customs, clothes, assumptions, etc. of the Sixties as an era--  it's all pertinent.

Of course if anyone took over an entire thread to discuss, say, the burgeoning film industry in Borneo, for page after page, then that would be the time to curb things!  But neither I, nor anyone who has posted, has ever abused the latitude permitted here.

Naturally, I respect your viewpoint, but in this case, I have a bit of a different one, more in a matter of "degree", than anything else, I believe.

@oznell  I remember your previous post and agree that it's a matter of degree (that rhymes!)  While I have no problem whatsoever with what you posted in your OP and thought the link you provided would probably  interest twinsister who is a fan of that show, what I wouldn't like would be a discussion of that link's epi here, which is why I brought up The Invaders thread.  When I open a Fuge thread I expect it to be about TF and yes, I do agree that mentioning  other shows is the same as mentioning fashion and style and other things of that time. Your posting that link reminded me that someone had started an Invaders thread so it occurred to me that I'd never seen it again and I wondered why there was no discussion on it.

After my comment about The Fuge being supposedly set in New Jersey, I looked up filming locations for the Fuge on IMDB.  According to them, the only episode filmed outside of California was the pilot which was filmed in Arizona.

If you haven't read the Trivia section under the Fuge, it is well worth reading.  Some interesting and funny things listed.

Another good one, but with some things that were annoying to me.  At first, I couldn't figure out the dynamic between Savano and Stella and why he was so controlling.  She wasn't physically impaired and seemed mentally stable, just a little kooky.  Appearances can be deceiving as we eventually found out.  It was a bit of a surprise that the little boy was adopted, since there wasn't even a hint about it.

I did like Kimble's scenes with Johnny, and he always seems to have a soft spot for children.   I wonder if DJ enjoyed working with kids.

What annoyed me was Kimble's reaction to Stella and Savano.  Why didn't he tell Savano that Stella sent him a note pretending to be from him?  Also when Stella showed up at his apartment why didn't he tell her to leave instead of bringing her inside?  I know he always wants to help others, but there are times I wish he would be more forceful and say no!

Joe Campanella was good as Jesse, who was sort of stuck between a rock and a hard place.  Diana Hyland was very good too.