I wouldn't have noticed that before, @Pearlee , but yes, I do see a bit of a resemblance in the bone structure of J.D. Cannon and Whit Bissell.  In his later roles at least, Bissell generally tends to be more "gray"--   by contrast, Cannon probably helped himself to some of Kimble's black shoe polish, ha.

I didn't like this episode and I'm not sure why.  Maybe it was because of all the flashbacks, but it seemed to go on for so long.  For me, none of the characters were very likeable.

I did laugh when the lawyer lent Kimble his car.  To say it was old, was an understatement! Could it have been any more conspicuous since they were trying to sneak away?

As always, Kimble did the right thing by going back and as usual gets embroiled in a big mess.

On a trivial note, I think of all the aliases he has used, Eddie Fry is the worst so far - LOL!

So agree with you that the characters were largely unlikeable (or despicable in some cases),  @twinsister .

As in some past episodes, some cartoonish stereotypes for me detracted from what could have been an interesting twist, that is,  someone else besides Kimble getting scapegoated for something he didn't do...

Ha, ha, yes "Eddie Fry" isn't exactly the most elegant moniker for our Dr. K!   That name does not fit him at all!

I didn't dislike this episode; I didn't find it worthy of that much emotion. I do agree about the cast of characters. Most were unlikeable and the best way to describe them is a bunch of cowards and jerks. Will return on tomorrow.

I did like (but certainly didn't love) this episode for several reasons.

But first I agree with @Oznell  that there were a lot of very implausble things, including the sheriff or constable  (Bissell) picking up a knife with his bare hand that he assumed was used in a murder, Kimble sitting in a police station where his Wanted poster was probably up on the wall somewhere without seeming to be at all uneasy, why Quine wanted revenge for his father so much after being so bullied and abused by his father, and  Kimble confessing to shooting Don Quine at the end.  All that aside...here is why Iiked it.

I thought it was dark and kind of different. I did like the flashbacks which used the same "creepy" music as the flashbacks in Girl From Little Egypt.  The epi was quite dark in tone and seemed to be emulating The Twilight Zone, esp when the townsfolk turned on the female lead (forgot her name already). I agree the characters were unlikable (except for Kimble ❤ of course) and this epi took a dim view of people, much like The Twilight Zone often did. I liked that the female lead didn't consider Kimble a love interest (rare).

I loved the expression on Kimble's face on the bus going back to the town to show up alive, that expression he's had so often of "I know I shouldn't be doing this because it's just going to be trouble for me."

This isn't an epi I want to watch over and over but I did find it interesting and "different." I recognized the younger brother as being in other shows of that era, perhaps even in another Fuge.

@twinsister  I so agree with you about that car! I laughed when I saw it, it looked so ancient.  But as for trying to escape town in it, I think the lawyer thought  Quine would just think he was driving, not that Kimble and the woman were escaping.

I didn’t dislike the episode, the flashbacks were necessary since they told the story in not too many words and was relevant.  I can’t see Dr. Kimble revisiting this scenario tho.

The father was already dead, accused of a crime he didn’t commit such as Kimble.  That may be the reason Kimble went back. That would make sense.  Even Janice said to Kimble that he had  brought up memories that were nearly forgotten.  As it turns out it was really Janice the brother was after.  She really didn’t lie, she just made the assumption that the father killled Frye. It was the jury that convicted him, not Janice.

The characters were impossible to like or feel any empathy for.  All of them were jerks.

@Pearlee - I should have clarified in my post that all the characters except for our RK were unlikeable - LOL!!

Good point about the car and it not being used for escape.

As for the younger brother, he looked familiar to me too.  I did a search on IMDB and he was in The Virginian, which my father watched, so I guess that is why I recognized him.

More Photos from this week's episode: 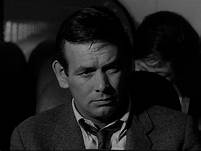 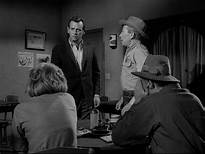 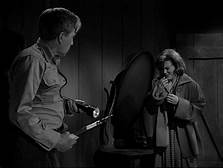 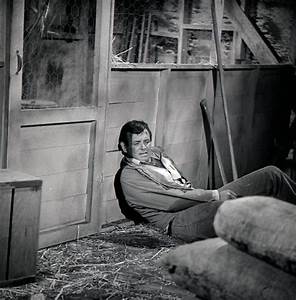 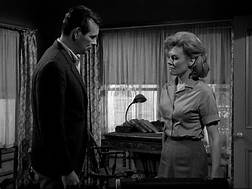 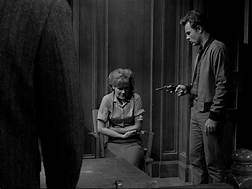 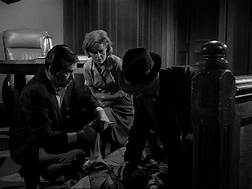 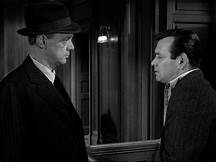 This week's memorable exchange took place between Kimble,  Constable Gibson, and Ballinger, Justin Briggs' attorney. There are parts of the conversation when it may be unclear which man is speaking. When that occurs, I have labelled it.

Kimble sat reading a report that Gibson gave him. Gibson started the conversation “I don't know what chance he had for a new trial. I know they put in the appeal but I could see the waiting was eating at him. Every day it was a little worse."

Ballinger walked into the office. Ballinger poured himself a cup of coffee. Gibson continued "Good morning Bertram." He handed Ballinger a couple of sheets of paper. "Would you mind looking this over? It's Mr. Fry's statement of what occurred on the night of the alleged murder.“

Ballinger started to read. "Who's been informed of Fry's return?"

Gibson turned to Ballinger. “Only you officially but it'll get around.“

Ballinger sat. “What did occur that night Mr. Fry?“ He raised his cup to drink.

Gibson stood and turned to Kimble. “Mr. Betram Ballinger's a lawyer here. He defended Briggs at the trial.“

Kimble repiled “We fought. I got away. I ran into the woods...I got lost.“

Ballinger looked at Kimble. “Did you ever think of yourself as a coward Mr. Fry?“

Kimble looked at Ballinger. “You wouldn't be looking for a scapegoat would you Mr. Ballinger?“

“Why would I be doing that?"

"I don't know. I don't know what kind of case the state presented that you couldn't break by demanding a victim or a body.“

Ballinger shook his head.“The state didn't need a body. They had an eyewitness."

Gibson chimed in. “I was there. She came over to my house yelling for help.“ They showed a flashback of Gibson and Janice returning to the sight where the alleged murder supposedly took place. "I ran back with her...to the Briggs' barn, that lean-to where you lived. It was a mess, full of evidence. There was some blood around. We took samples, had them tested. It showed it wasn't his blood. Had to be yours. We even found a weapon."

The flashback continued with Briggs returning to his barn. When questioned about Kimble's whereabouts, Briggs replied "Forget him. He's gone." The flashback ended with Janice pointing to his feet and commenting that the boots he was wearing were covered with mud. Gibson grabbed the boots from Evidence and placed them on the desk in front of Kimble, "He was wearing those." Kimble looked at the boots as Gibson went on "I impounded them and we proved there was only one place that mud could have come from. There's a quicksand bog in those woods under his house."

Gibson sat down at his desk. “That bog's been known to swallow a full grown deer. He had time to carry a body over there and..."

Ballinger interrupted their conversation and turned to Kimble. “Does your signature on a piece of paper erase all of this from your conscience Mr. Fry?“

Kimble who had turned to walk away turned back toward Ballinger. ”There doesn't seem to be much more I can do."

Gibson looked at Kimble. Kimble looked directly at Ballinger and then at Gibson. "I have a better question for you Mr. Ballinger. His appeal was pending. He knew I was alive. Why did Briggs run away?"

Ballinger started drinking his coffee again. Gibson looked down. "I don't think we ever thanked you Mr. Fry. For coming back."

Kimble turned to the door. "Yeah, well I don't think you ever will." Kimble walked out of the office.

Question: Did anyone benefit from the "Kimble effect" in this episode? If so, who?

"Suddenly you just know it's time to start something new and trust the magic of Beginnings..."
Report Inappropriate Content
Message 20 of 27 (124 Views)
Reply
1 Heart