THE FUGITIVE "NOT WITH A WHIMPER" D. JANSSEN MONDAY 2:00 A.M. EASTERN METV 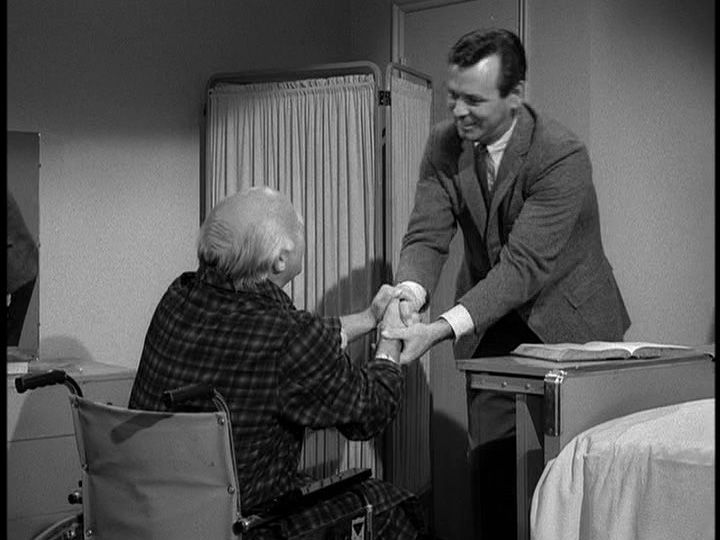 Love to see Kimble's rare broad smile above, as he cordially greets an old friend!

Another good one.  Not as movingly resonant as last week's, but interesting, and suspenseful.

Kimble's drawn to visit an ailing former physician/mentor "Dr. Andrew Emmett McAllister", or "Mac" (multiple Fuge performer Laurence Naismith), who has become a zealous anti-pollution crusader, much to the concern of his assistant and friend, "Nurse Verna Murdock" (Audrey Christie).  And Kimble and "Willis Hempstead" (Lee Meriwether),  another friend and activist, become unwittiing pawns in a scheme of Mac's that could go tragically awry... 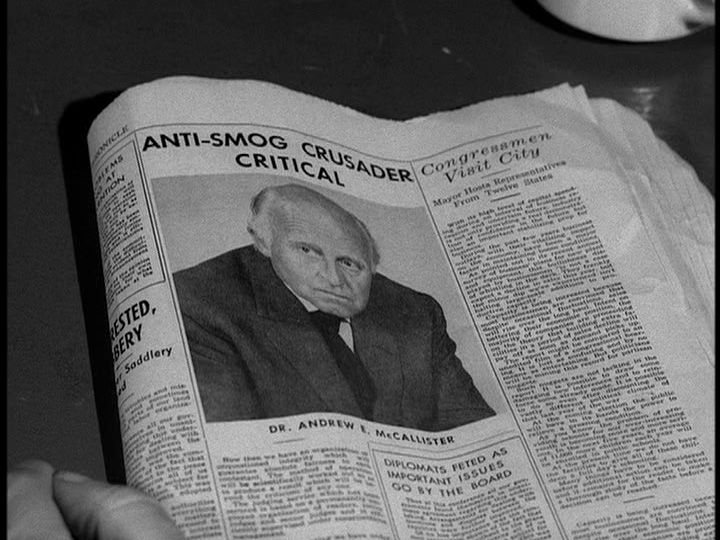 Remember Naismith as the excitable zoo owner in a not too distant episode?  He seemed to be good casting for sort of scholarly or eccentric Brit roles in the Sixties, appearing in such widely disparate shows as "Bonanza",  "The Invaders" (again, he was an intense professorial type),  "12 O'clock High" and "The Persuaders!"

It was interesting that one of the imdb reviewers marked the similarity of this episode to the excellent 'law-professor-Ed Begley' episode, "Man in a Chariot"--  and the same thought had occurred to me-- there are parallels, right down to the starchy assistant/protector who would rather that Kimble had never shown up!

Pretty Lee Meriwether has a slightly off-beat role for her in this. 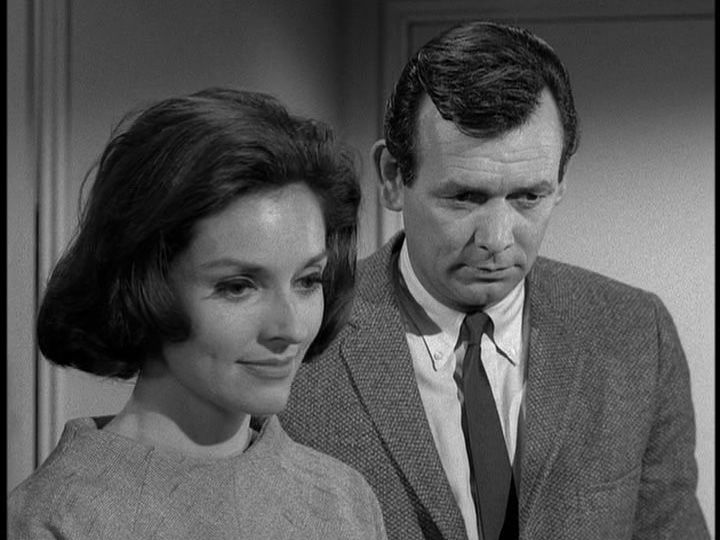 I found myself liking Audrey Christie too (long familiar from both TV and films --"Splendor in the Grass", etc.) 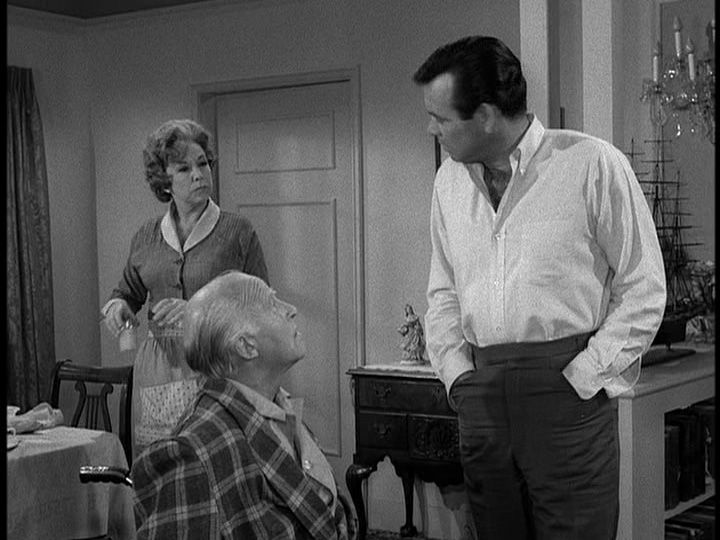 The art direction was characteristically good in this one-- that factory seemed very plausible to me-- in fact, all the fleeting impressions of a 'gritty' manufacturing town were well-conceived, I thought.  Just love the sense of place we get in so many of these episodes. 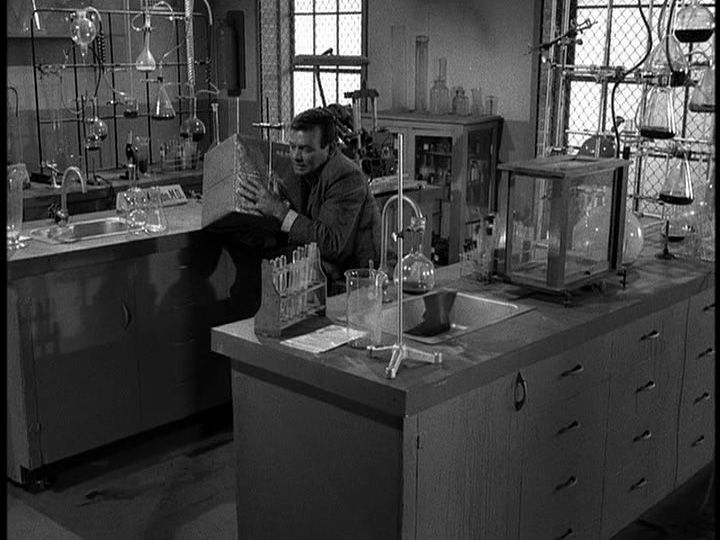 Notice anyone from the Andy Griffith show here?? 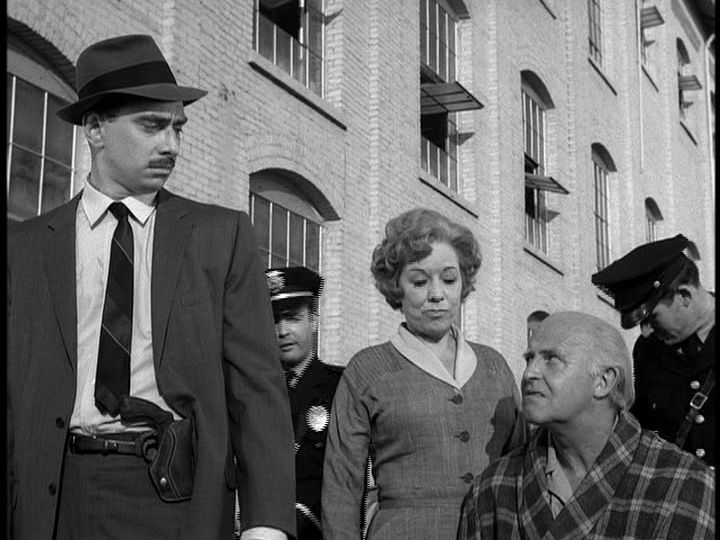 Interesting words exchanged here.  As usual, you're left wishing there had been time for more, or more of a relationship...  And you have to love an episode that incorporates T. S. Eliot.... 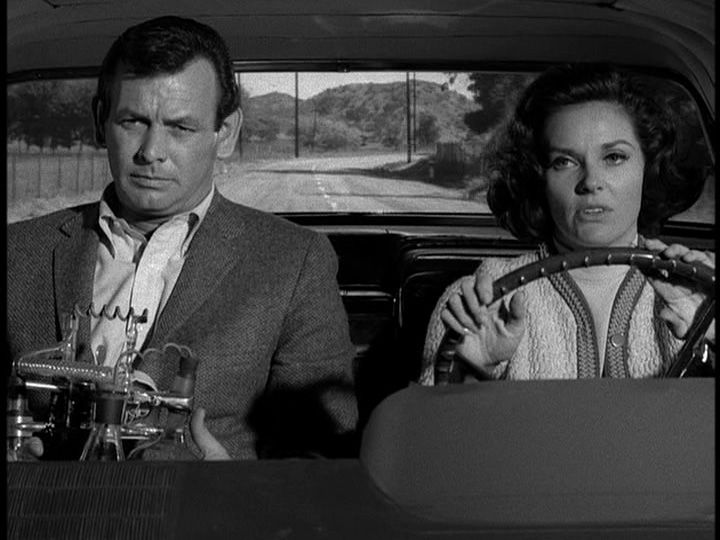 Well, again, no viable free streaming videos for this one (that I could find, at least).   Even tried to find "Man in a Chariot" to post as a bonus video, so those who haven't seen it could compare and contrast with "Not with a Whimper"--  but no luck.  It looks like someone has systematically gone through the whole video canon online, and deleted most of them, sigh.

Oh, forgot this---  it was amusing to find such a different child coming into Kimble's orbit, following right after sensitive "Kenny" of last week....

Bingo, @vsm !   One of the things I perennially enjoy about classic TV --  spotting all the actors cross-pollinating different shows, and also, different episodes *within* shows.  The Quinn Martin production stable was known for that, of course, but also great shows like "Perry Mason",  which had that revolving team of yeoman actors showing up again and again...

I do have a weakness for the episodes in which Kimble crosses paths with people he knew before the murder and trial.  It gives more of a rounded look at him, and for a few brief moments, he can almost relax, being around those he knows won't betray him....

Thought it was neat that even though "Verna" clearly didn't want him there, potentially getting Mac too excited, etc.,  she was not about to give him away intentionally (even though she did call out, upon first seeing him,  "Dr. Kimble"!!)   But after that, she was discreet.

The ethical and moral questions raised by Mac's causing the bomb to be placed, were just touched on-- would have been much richer and more interesting for there to have been more of a discussion of that...

I've never liked this epi much and I didn't like it any better this time.

On top of that, the main characters were truly unlikeable (except RK of course and the bland and almost unrecognizable young Lee Merriweather.) I sure wouldn't have cared if young Joey had been blown up; the little brat deserved it (hence no tension for me when he was carrying around the box). On top of all this, the plot was not very believable.

I did love the reference to Beatles ❤ albums making the box fragile and laughed at the Verna character discussing the old man's condition of dying with Kimble when she said "well he IS almost 70"  as if it was pretty much time for him to die of something!  (I'm 69 so that struck me as particularly funny).

The epi didn't remind me of Man In a Chariot other than the wheelchair aspect and him having selfish motives.  They were very different and I loved "Chariot" which had the very admirable character of Drivas as well as his relationship with Kimble going for it. And the man in the wheelchair, Ed Begley,  changing for the better at the end of Chariot.

Yes, @Pearlee ,  as to the allusion to the Beatles, that struck me too, and was funny!   A rather rare reference within the series, I think, to then-current pop culture of any kind.  At least, I can't think of many others.

Meant to tell @twinsister  I noticed the prices in the window of the Diner at the beginning, and the dime for just the coffee after Kimble didn't eat the pie.

This was episode was OK, but not as enjoyable as last week.

@Pearlee - I also laughed at the "he's almost 70" remark and I had no sympathy for that kid with the bomb.

It was nice to see Kimble's big smile at the beginning when he met his old friend.  The characters to me were very bland.  We are to assume that the guy in the coffee shop alerted the police after seeing RK for just a few minutes.  That messy slice of pie should have been a warning that things would not go smoothly for him in that town - HaHa!

The whole premise of this episode with Kimble going back to see an old friend was a little unbelievable (even if it wasn't in his home town).

Once again a female who hardly knew Kimble, believed he was innocent and helped him escape.

This episode I would not watch again.

Meant to tell @twinsister  I noticed the prices in the window of the Diner at the beginning, and the dime for just the coffee after Kimble didn't eat the pie.

@Pearlee - I noticed those prices too - sixty five cents for a cheeseburger and fries!!