There's been a lull, but now we're back into some really meaty episodes of Season 1 again!

This one is so interesting in terms of philosophical and ethical questions.  Kimble is restlessly continuing his quest to find the one-armed man who killed his wife.  He's in Massachusetts when a bus full of children has a spectacular, fiery wreck.  Of course, his medical and life-saving instincts cause him to risk all to rescue the trapped, helpless victims. 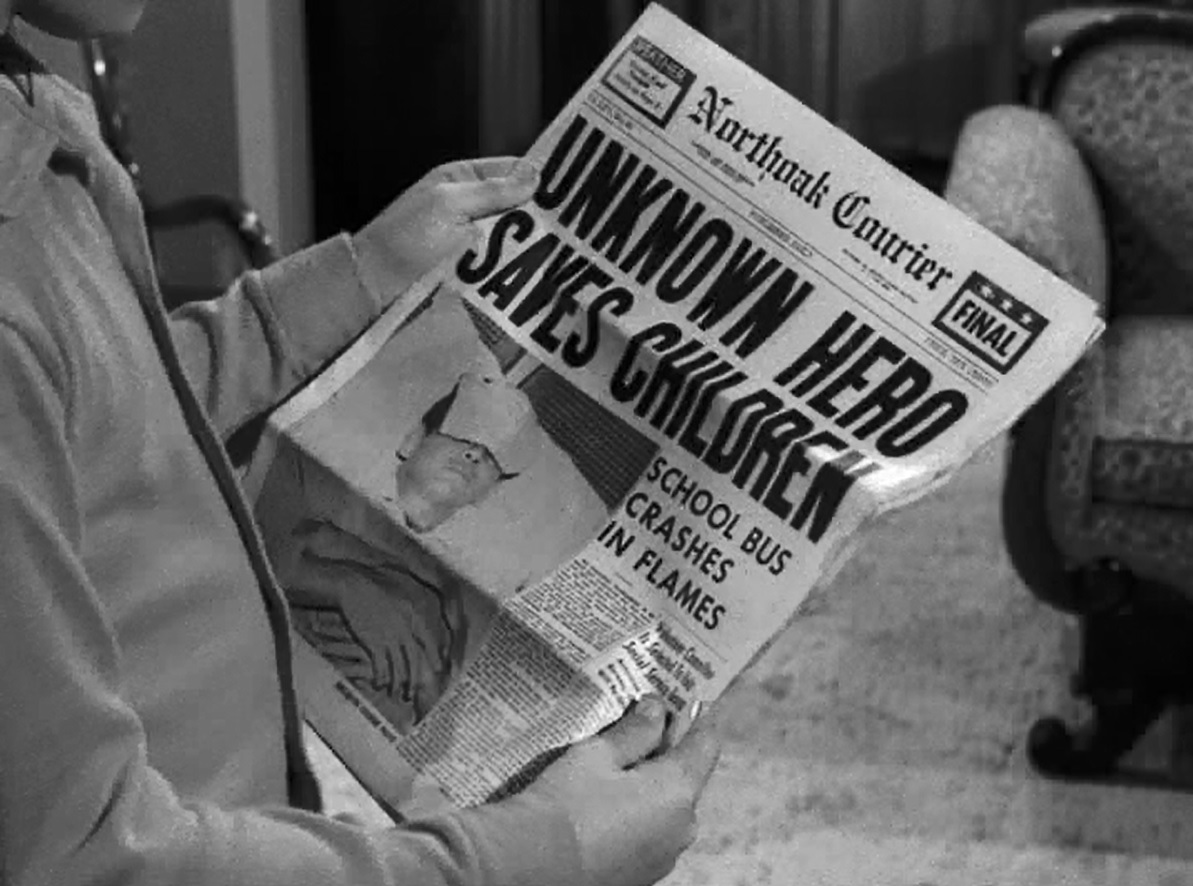 Townspeople are so grateful, he's allowed to recover in the home of some of the prominent residents.... who turn out to be the alert sheriff and his wife!  Danger for Kimble.  When he is discovered to be the notorious fugitive doctor accused of murder, the sheriff's wife (Nancy Wickwire) has some soul-searching to do-- and the residents of the New England town also make some life-altering decisions regarding the unmasked fugitive within their midst...

Very dramatic episode, and very positive portrait of humanity in action.  The ending brings tears, in a good way!

I remember everything about this one, @Oznell. A very good episode. Yes, great ending. Thanks for the heads up.
Report Inappropriate Content
Message 2 of 24 (286 Views)
Reply
1 Heart
Pearlee
Honored Contributor

Some of you may remember Frank Overton as the sheriff also in To Kill A Mockingbird who refuses to "out" Boo Radley.
Report Inappropriate Content
Message 3 of 24 (276 Views)
Reply
1 Heart
Oznell
Honored Contributor

Yeah, I figured you'd remember this memorable episode, @Pearlee .  For me, it has the added bonus of being one of the episodes that has Lieutenant Gerrard in it -- he makes a beeline for the town, of course, the minute he thinks they've got Kimble!

Thanks, @Oznell  I never remember to record The Fugitive and DJ was a very favorite of mine when I was a teenager in the '60s!

Oh, thanks @Pearlee --  I knew Frank Overton's face looked familiar-- couldn't place him!  I love spotting all the 60's actors who cycled through all the different shows, from "Perry Mason" to "The Fugitive" and so many more.

Nancy Wickwire was in more than one Fugitive episode.  I think Barbara Pepper was friends with Lucille Ball, and appeared in some Lucy episodes!  (Hope I'm not confusing her with someone else!)

@Oznell. LOL I almost mentioned something about Gerard being in this episode. 😄
Report Inappropriate Content
Message 9 of 24 (239 Views)
Reply
1 Heart
Oznell
Honored Contributor

Ha, ha, @Pearlee , "great minds", etc.!   Truly, I think for us  "Fugitive" fans, the times when Gerard is on the scene with Kimble often have an extra, almost electrical charge.  Gerard is so obsessed-- and Morse plays his bordering-on-neurotic fixation with Kimble to the hilt.

Of course at some points he's just such an irritant!  Thinking now of that upcoming episode, I know you know it well, where Kimble dares to come back to his father's house and hide out.  Gerard is again right on the spot, and Kimble's sister and Dad have to do some fancy footwork to keep him off the trail....