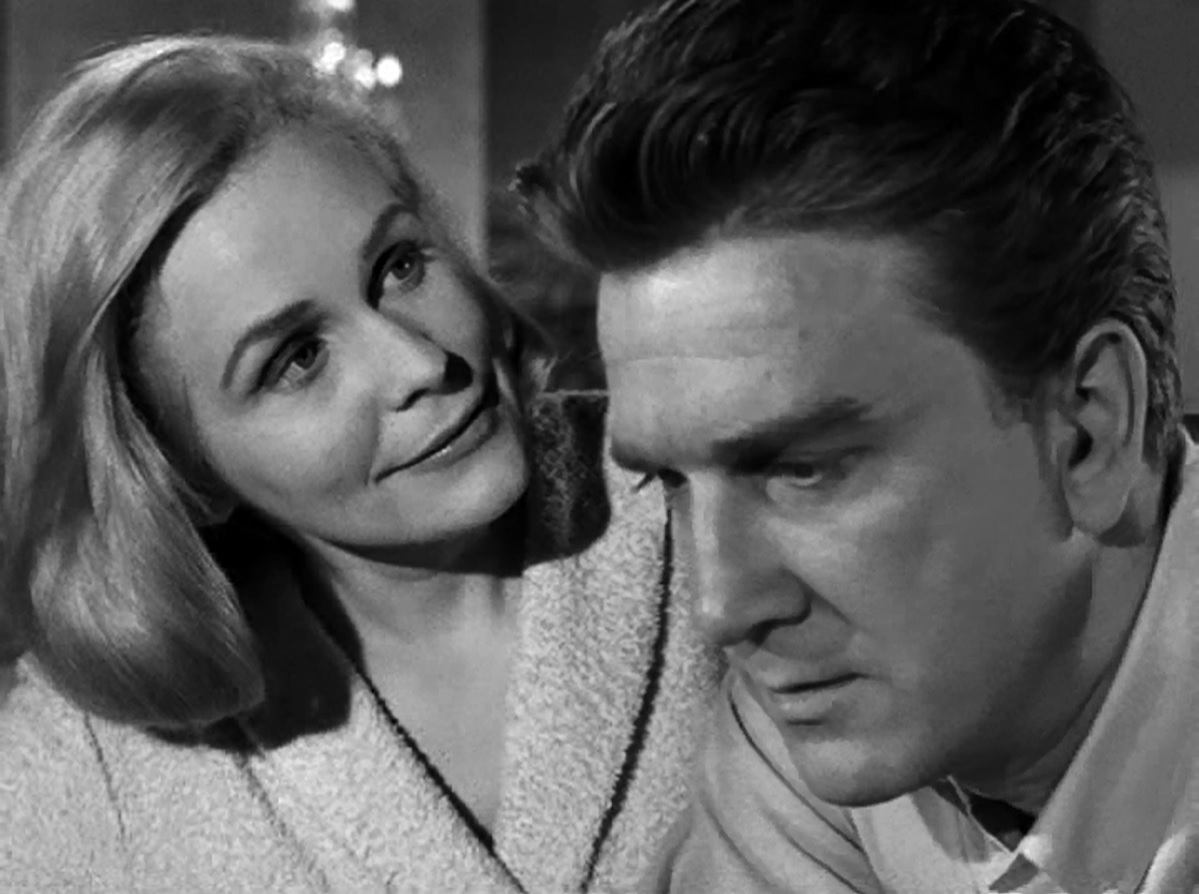 Another great one!  One of my favorites, actually.  Kimble is working for a socially prominent family who run a mid-size city's finest department store. Leslie Neilsen has married into that family, and runs the store, but his position is an uneasy one.  He's bright, capable, but originally from the "wrong side of the tracks", and others (even sometimes his high-strung wife) don't hesitate to remind him of it.

Kimble inadvertently witnesses something that Leslie wants to hush up.  Kimble likes his boss, and he tries to awaken his temporarily dormant conscience, without risking his own imperiled fugitive status.  The results are explosive.

I'm trying to be cagey and not give too much away!  The fun in this episode is its exploration of relationships, especially the complex one between Diana Van der Vlis, the "Lady MacBeth"-like department store heiress, and her hunky, ambivalent, but basically honorable husband, Leslie.  (It's neat to see the often daffy Neilsen in a serious, earnest role.) 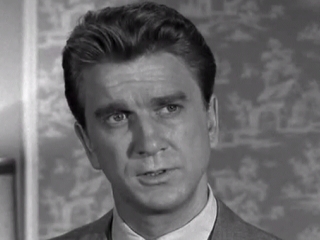 Diana Van der Vlis was one of those Sixties' actresses whose elegant style and throaty, trans-Atlantic purr, seemed to fit her best for spoiled, socialite roles.  She's perfect here as one who will stop at almost nothing to maintain her comfortable status quo.  Love it when she tangles with Kimble!

Edward Binns is reliably good as a canny department store detective.  There's even an amusing sort of sub-plot with one of Kimble's opportunistic, harum-scarum co-workers: 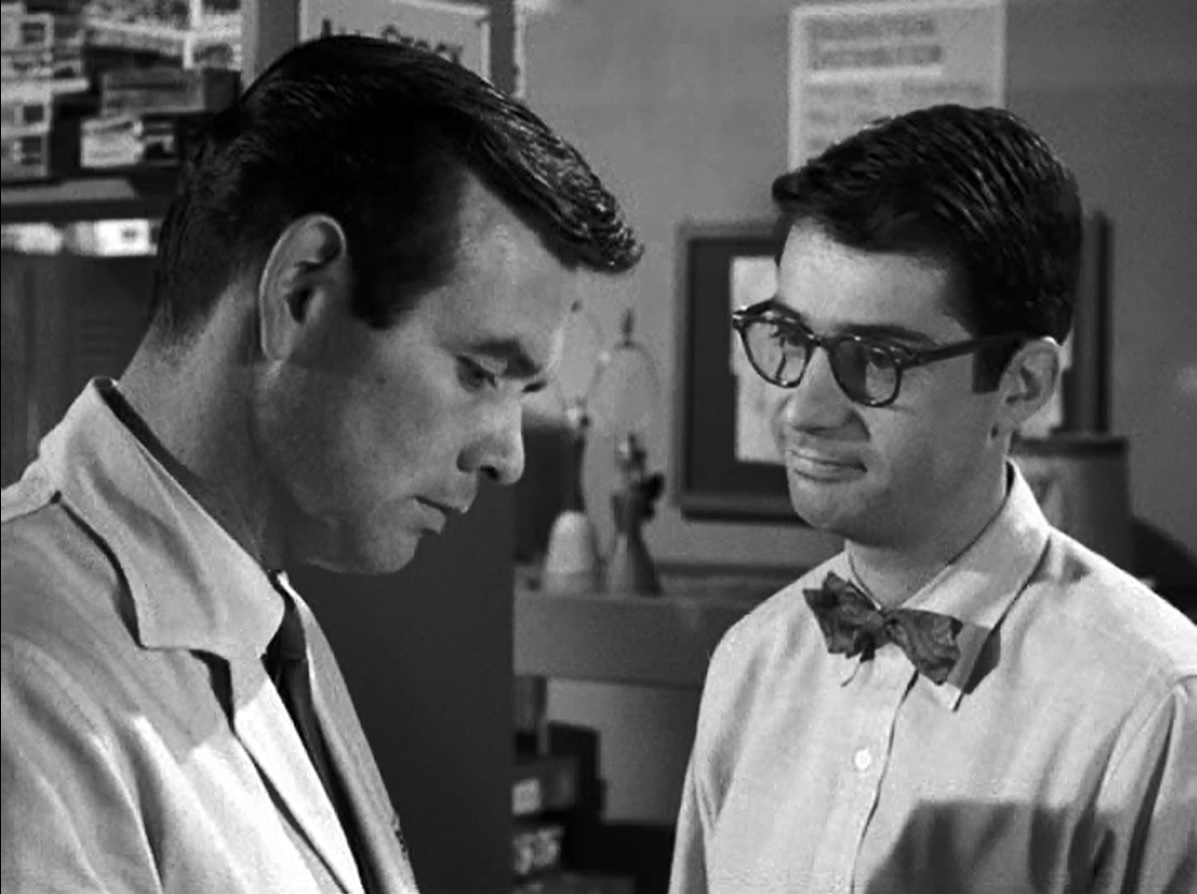 "Glass Tightrope" is a rather stylish envelope for further examination of the issues of ethics, honesty, and personal responsibility that characterized last week's meaty episode.

Thanks @Oznell. Another good episode. So odd to see Leslie N before his hair turned that silvery color. Edward Binns had a much more starring role in a different Fugitive episode; I'd forgotten he's in this one too. Van der Vlis always reminds me of Dina Merrill, tall, slim, sophisticated and elegant. They could play the same roles.
Report Inappropriate Content
Message 2 of 22 (572 Views)
Reply
2 Hearts
Oznell
Honored Contributor

Hey, that's so true, @Pearlee !  Van der Vlis is just the same type-- they could be sisters.  Although Dina Merrill I sort of associate with 'sunnier' roles.  Here, Diana Van der Vlis is playing not only "patrician",  but sort of slinky and with an underlying malevolence--  lethal combo!

@Oznell. I had trouble sleeping last night and ended up watching the 1st half hour of The Fugitive before I fell asleep. Gosh when Kimble telephoned Neilson to tell him he'd been in the parking lot and had seen Neilson kill the guy, I had the exact same thought that I had as a preteen watching that show when it first aired. Which is, Kimble has such a distinct, raspy voice, how would Neilson not know it's Kimble the next time he heard Kimble talk? LOL I was 11 yrs old then. Back then, in all the crime movies people disguised their voice on the phone by putting a handkerchief between them and the receiver to muffle their voice. Kimble didn't even do that! I was just rolling my eyes as I lay in bed watching that phone scene, 57 years after I had my exact same reaction to it. 😄
Report Inappropriate Content
Message 4 of 22 (463 Views)
Reply
2 Hearts
Oznell
Honored Contributor

Ha!  I recorded it last night, @Pearlee ,  and watched it today as a lunch time "treat".  Yup, I had that same thought-- although I don't think I'd have been precocious enough at the age you were when you first saw it to realized Kimble's boo boo.

His voice wasn't like anyone else's.  So yeah, it's weird he didn't disguise it.  Incidentally, I've wondered about David Janssen's accent.  Think he was originally from Nebraska, then I'm thinking his mother took him to California, maybe?  His accent sounds much more "Eastern" than it does Midwestern to me.  He doesn't have the distinct, hard "r"-- he tends to drop the r's in words....

Just idle thoughts that pass through my mind while watching!  Loved that episode.

Speaking of directing in the other thread, @Pearlee ,  I was amazed to see in the credits that Ida Lupino directed this episode of "The Fugitive"!   No wonder it's so good!

Yes born in Nebraska to a Jewish father last name of Meyer and an Irish mother. They divorced when Janssen was young and David and his mom moved to CA. Janssen is David's stepfather's name which he took on.
Report Inappropriate Content
Message 7 of 22 (451 Views)
Reply
1 Heart
Pearlee
Honored Contributor

By the way, the Sunday after this next one is The Girl From Little Egypt.😍
Report Inappropriate Content
Message 8 of 22 (447 Views)
Reply
1 Heart
Oznell
Honored Contributor

Yeah, I've wondered if the lost Jewish father and a boy's yearning to know and have his Dad, accounts for the sensitivity and sometimes naked vulnerability you see in his acting....

Oh, yeah, @Pearlee , finally "Girl from Little Egypt" is on the horizon.  The one in between I think is "Terror at High Point" which is ok but not a particular favorite.  I do love the way Kimble relates to the mentally challenged young man though-- and Jack Klugman is good.