Auto-suggest helps you quickly narrow down your search results by suggesting possible matches as you type.
Showing results for
Search instead for
Do you mean
Reply
Topic Options
tucka
Trusted Contributor

yes they should have called the police so they could hear her confess, is sheila going to get away?Thomas should have been there,he could have confronted her with what he knows Sheila did to scruffy and Brook.convenient the writers left that out,somehow I think sheila will kidnap the baby and leave town,what good is the confession with out the police there? tucka..

And the blabbing idiot's nonsense just drags on and on. I wanted today

to be the day when this ends already, no keep talking all this through.

Why give this lunatic more time to explain, sick of this.

When will someone say to call the cops? Just cause Sheila's telling

all her secrets after she revealed she's killed Finn. who cares about

the rest? Put her in the police custody already and let her blabber

Something to look forward too, hopefully Monday's show. 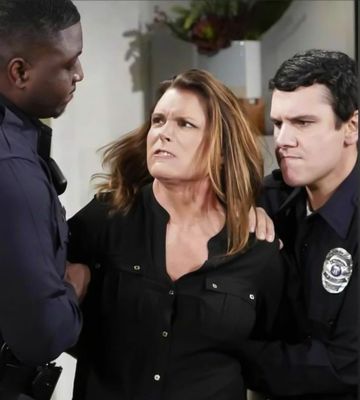 One has to wonder, assuming they do, at some point, unload Sheila, will they re-up her, yet again, a few years down the road? Personally, I feel like they've gotten as much mileage from Psychotic Sheila as it's possible to get and it long ago ceased to be believable that this fruitcake would continue to be allowed out in public. Also please, exporting her back over to Genoa City is not an option. Let's finally be rid of her.


In my pantry with my cupcakes...
Report Inappropriate Content
Message 33 of 197 (706 Views)
Reply
5 Hearts
reviewer from sc
Super Contributor

I've been thinking a little bit about why the writers brought Sheila back. I confess that I fast-forwarded through most of the week's shows (regarding Sheila/Steffy/Ridge/Taylor)  because quite frankly I'm sick of this whole storyline, as well. I think they wanted to continue on the Sheila character in Hayes. If this show lasts (which I don't know

), maybe the writers want a little bit of that craziness to manifest in the family down the road. Of course, in soap opera years, the kid will be a teen in 5 years. Just a thought...  For whatever reason the writers brought in this storyline, I wish they had kept this to themselves. It was very boring and predictable to me.

To be honest; I'm not sick of Shelia because I haven't been watching this one that long.  She's new to me.  If they never brought her back I never would have caught the love to hate her syndrome. LOL Although I totally understand  why longtime viewers would be disgusted with her and the same old same old storyline.

@stevieb  How much can you do crazy??? I guess it's sort of like the 👿  on Days.  Been there, done that. It was trash the first time around...now it's just plain 💩!

Are you still watching over there on NBC?

@KBEANS  Nope. Decided I might re-up over on Days if they ever got rid of the ridiculous devil storyline, Instead they kept him hopping from character to character and so I stopped even checking in. Have no idea what's going on over there these days, though maybe I'll check it out. As for Sheila, yep, she's had too many incarnations to be believed at this point, both on Young and Restless and here. I know she's resurfaced at least a half dozen times between the two shows, probably more and it just doesn't make sense that someone that far fetched continues to be out and about running free.

I think it's winding down on Days and I'll let you know when you can come back so you don't have to be tortured with the nonsense they continue to feed us. @stevieb

I can't even remember when the devil story started. It has to be coming up on a year. I still can't believe they went as far as they did with it.

Bold & Beautiful spoilers for week of May 16:

Bold & Beautiful spoilers for Monday, May 16:

After hearing Deacon’s take on Ridge, Hope comforts Brooke as she desperately seeks answers to some nagging questions. We’re guessing one of her greatest hits, “Why did I drink on New Year’s Eve?” will feature heavily in the playlist.

Sheila is at her most dangerous when she’s cornered and under attack, and that’s exactly where she happens to be right now. As the she-devil refuses to go quietly, fight to the very end, we can only hope Steffy and her loved ones emerge unscathed as the madwoman refuses to go out quietly, fighting to the very end. Who are we kidding? We know they’ll be scathed… Perhaps it’s best just to hope they come out of the confrontation alive!

Though it looks like Sheila’s last stand, here’s what Kimberlin Brown recently said about her status with the soap.

Bold & Beautiful spoilers for Tuesday, May 17:

Hmm… this is shaping up to be a theme: Worried about the future of her relationship with Ridge, Taylor seeks counsel from Steffy. Will her daughter continue to encourage her to fight for a man who loves two women, or will she instead suggest her mom move on from the drama and find herself a “Finn” of her own?

In what could lead to a turning point in Ridge’s latest round of waffling between his current and ex-wife, he stands at Brooke’s side as she learns the horrifying truth about Sheila’s crimes. At long last she will have her answer to the gnawing — and absolutely maddening — question of why she drank on New Year’s Eve. Sweet relief!

Photos and videos: Katherine Kelly Lang kisses and tells who showed up over the weekend to lift her spirits as she recuperates.

Bold & Beautiful spoilers for Wednesday, May 18:

Well, this is bound to go over well with Ridge when he hears about it: Dollar Bill questions the dressmaker’s love for Brooke to Wyatt, Liam and Hope. Are we headed for another round of “Bridge” vs. “Brill”?

Alert the bookies and place your bets! The moment of truth arrives as Ridge renders a decision about his immediate future with Brooke and Taylor. Notice the teaser says “immediate,” as in “subject to change,” so you’ll also need to lay a separate wager on the outcome of the long game.

Katherine Kelly Lang shares an update on her condition — and reveals who raced to her side to lend a hand.

Bold & Beautiful spoilers for Thursday, May 19:

Still oblivious to the fact that Eric has been playing around with Donna and not on the pickleball court at the club as he claims, Quinn unites with her husband to help the Forrester family in their time of crisis.

When Ridge discloses his plans, Steffy gets emotional, and Taylor speaks her truth. We can’t even imagine how biting that candor might be if he reveals he’s choosing Brooke! If only Taylor had listened when we tried to warn her that Ridge just isn’t that into her. (We even included pictures, for Pete’s sake!)

Bold & Beautiful spoilers for Friday, May 20:

Unable to suppress his guilt, Thomas breaks down to Ridge about his involvement with Sheila. His father is bound to be upset that his son didn’t speak up immediately and engaged in yet another manipulation… but his good intentions and guilt might win the younger designer some brownie points. Brooke, on the other hand, is almost certain to be utterly unforgiving of her stepson.

It’s on like Donkey Kong! Get ready for a little — okay, a lotta — jailhouse rock when Deputy Chief Baker grants Brooke face-to-face time with an imprisoned Sheila.

WHY is no one planning a funeral for Finn??!!

I realize catching Sheila is an important part too but no one is even talking about a funeral!! Where are Finn's parents??!!

weeks ago and we haven't seen or heard anything else. Did she just disappear

into thin air? Strange. You would think Steffy and the family would at least

say that they attended something.

Don't know if we will ever see Jack and Li again. This show is known for

NOT tying up loose ends. We had 4 or 5 shows of Sheila explaining her

insane reasoning for shooting Finn, so much time wasted.

minutes of her mouth continuing to still ramble on nonsense. Don't you

time to listen to nonsense?

At least this stupid booze story of why did Brooke drink has FINALLY ended.