Auto-suggest helps you quickly narrow down your search results by suggesting possible matches as you type.
Showing results for
Search instead for
Do you mean
Reply
Topic Options
SloopJohnB
Trusted Contributor

I guess The Talk needs some ratings from B&B watchers as Scruffy, aka

Thorsten Kaye, and Carter, aka Lawrence Saint Victor are set to be on

appear on B&B on Tuesday. 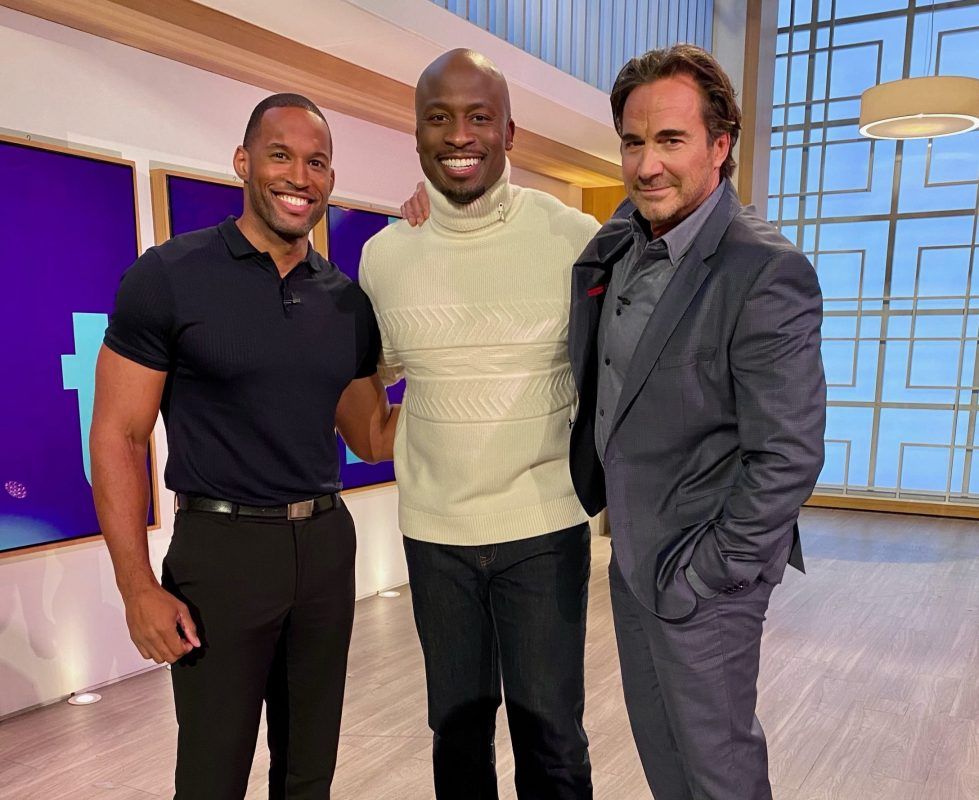 @threecees   Maybe it's me, but their heads almost look like they are superimposed or photoshopped on their bodies.  I think it might be the angle.   LOL

I would give everything I own just to have you back again.......David Gates of Bread
Report Inappropriate Content
Message 51 of 80 (879 Views)
Reply
3 Hearts
KBEANS
Trusted Contributor

@SloopJohnB  Superimposed, Hysterical 😂 I think you may be on to something though.  I've recently seen other celebrity photos that look like they may have cut and paste them closer then they really were. Maybe they were "distancing" Oh, how I've come to hate that word! 😝

Does that show come on right after B&B? I'll have to look it up. I'd like to see it. I have come to like Scruffy.

This week I was afraid Taylor's girls were literally going to come out of her top!  I must be getting old-fashioned in my senior years.

What girls? 😝 You must mean her tiny tots? 😆 I'm too busy looking at her hair helmet. Is it a new wig she's wearing or am I just getting used to seeing her in it?

Deacon lays bare his soul as he professes his love to a stunned Brooke. Unfortunately, La Logan is almost certainly going to shoot down his “hope for the future.” Will the rejection send the reformed con into yet another downward spiral?

Hope pressures Liam to keep quiet to Steffy about Brooke’s relapse. Her husband, however, is not known for being able to keep something hidden, so there’s a good chance his ex will find out.

Bold & Beautiful scores a TD with its casting of Forrester’s new exec!

While Deacon may be envisioning a romantic reunion between himself and Brooke, she, on the other hand, is tormented about her secret night with Hope’s father. Will the mounting guilt lead to her spilling the beans to Ridge?

Well, it sounds like at least one Forrester lady is in the know about Brooke’s relapse. Watch for Taylor to pay a surprise visit to her nemesis, offering her friendship and professional help.

Sheila covers when Taylor gets suspicious of her obsessive questions about Brooke. But how long can she keep up the charade, given how fixated she’s become on putting the blonde in her place? Will the doc realize what’s going on before someone (Brooke) gets (Brooke) hurt (Brooke)?

Paris questions her true intentions after witnessing Zende’s encounter with another woman. The question is whether or not she feels jealous upon taking in the scene… or feels nothing at all!

Throwing caution to the wind, Carter and Paris share a passionate kiss. It’s all a little shocking when you remember her stance on cheating when it involved her sister and when you consider that the Forrester COO has very recently been down this road and knows exactly where it leads!

Closing in on the truth?! Liam and Hope garner perspective on what may have happened to Brooke on New Year’s Eve. If they find out what went down, will they blame Deacon, or will Hope defend the father with whom she’s finally forged a relationship?

On the anniversary of her passing, John McCook (Eric) fondly remembers Darlene Conley — and we open a photo album full of Sally Spectra memories.

It’s the moment of truth when Hope begs Brooke to confess to anything that may have happened to make her drink. Will her guilt-ridden mother confess to kissing her father and helping him off the wagon on that fateful night?

Steffy’s been urging her mom to fight for Ridge. But should both women move on instead of dwelling in the past? Here’s what we’d rather see than another war between the Logans and the Forresters.

@SloopJohnB  Superimposed, Hysterical 😂 I think you may be on to something though.  I've recently seen other celebrity photos that look like they may have cut and paste them closer then they really were. Maybe they were "distancing" Oh, how I've come to hate that word! 😝

Does that show come on right after B&B? I'll have to look it up. I'd like to see it. I have come to like Scruffy.

@KBEANS  Probably cut and paste is a better definition of how the heads look on their bodies.  LOL

Actually the show that comes on directly after this show, in my area anyway, is Dr Phil.  👴

I would give everything I own just to have you back again.......David Gates of Bread
Report Inappropriate Content
Message 55 of 80 (748 Views)
Reply
2 Hearts
KBEANS
Trusted Contributor

I liked Steffys jacket and pink turtleneck. I gotta get a pink turtleneck to make my blazer look designer. 🤔  Maybe It'll change my whole life...who knows ?

So Miss Wonderful, Perfect, Object of every man's desire, goddess, Paris now is peeved that Zende is going out?  Give me a break!

She wants every man panting after her and waiting on her to choose them while she only plays the field?  Really?  OR is she just shopping around for the biggest (don't get ahead of me here!) bank account?

If you think Carter has taken away the Dumb as a bag of rocks award from Liam, please raise your hand.

@Sooner  Paris should enter the Miss America contest. All the judges would

have to do is see her photo and declare her the winner. This character is a

This show is such garbage. It is Paris, Brooke, Sheila, repeat and rehash

and over? Feels like he's on trial in court.

Hope and Liam aren't sure if he has his story right, can't they remember

when he made the big reveal about Beth? Guess not.

pretty much all these people. Both the dumbos can't understand what

he's talking about, yet they know that Deacon's been back for months.

My main concern is where is the stuffed animal, Brooke said she hasn't

seen it, maybe Santa Deacon has it!

Now where is that Santa hat??? 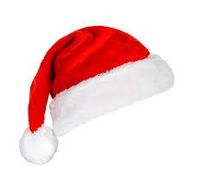 Paris wants to have her cake and eat it, too, and obviously thinks Carter should be serving it up! So the younger Buckingham sister balks when the Forrester COO puts the brakes on their smoldering passion. Could it be pal Ridge’s warning about getting involved with women who are already in a relationship that makes him think twice? Or just, you know, common sense and/or experience?

Hope is shocked by a guilt-ridden Brooke’s torrid confession. We’re not sure why, at this point, anyone would be shocked by the blonde bombshell copping to kissing out of turn, but her daughter clearly wasn’t expecting to hear that her mother was snogging her dad over the holidays!

What could possibly go wrong?! Concerned about her daughter’s relationships, Grace meddles in Paris’ love life. Something tells us the Forrester Foundation go-getter might be tempted to pull the welcome mat out from under her mother’s feet after this move.

Brooke is worried when she learns that Douglas is with Thomas. And so she should be. After the way she judged her stepson so harshly, if the young designer gets wind of her kissing someone other than his dad, he’ll undoubtedly waste no time in filling in Ridge on the deets.

Well, it looks like Brooke’s worst fears have come to fruition as Douglas tells a confused Thomas, Steffy and Ridge a strange story. But will they put two and two together and realize that the Santa Claus that Grandma was kissing was actually a Santa Con — and none other than Deacon Sharpe?

When Brooke loses Ridge again — and let’s be real, we can all read the writing on the wall — she’s not going to have nemesis Taylor to blame… or Sheila… or Deacon. And obviously, Douglas won’t be at fault! He’s just a kid! No, the person at whom she’ll have to point the finger is none other than… Well, you’ll see when you read our story on exactly this topic.

Let the wailing and gnashing of teeth begin! Liam urges Hope to express her feelings about her parents kissing. But might she surprise him by deciding she’s happy about it and hopes they get back together? After all, Ridge did rub her the wrong way, what with threatening to kick her off the property and all.

On a singular mission to destroy the blonde who had the audacity to vow to keep her out of her son’s life, Sheila relentlessly pushes an annoyed Deacon for information about Brooke. Will he crack under the considerable pressure or continue to protect his so-called lady love?

On-screen reunion! Bold & Beautiful nemeses ‘Deacon’ and ‘Rick’ are getting back together and it sparked a brilliant idea. Get the details inside.

Where there’s a will, there’s a way… and Sheila may just have found it when she watches from afar as Hope and Deacon discuss his night with Brooke. Will the madwoman manage to get close enough to overhear the details? Brooke had better hope not!

This kid has stumbled onto more damning information since he returned to Los Angeles from New York than most of us do in a lifetime. Now poor Douglas struggles to keep Brooke’s secret, but will he manage to keep a lid on the blonde’s latest betrayal… or is it destined to come spilling out?