Auto-suggest helps you quickly narrow down your search results by suggesting possible matches as you type.
Showing results for
Search instead for
Do you mean
Reply
Topic Options
loveschocolate
Honored Contributor

Katie and Carter’s bond grows stronger, which can only mean that they’re headed for a romance — and eventually a living-room wedding — unless something gets in the way. Perhaps that something will turn out to be a very determined Dollar Bill Spencer?

Uh-oh. Quinn goes on the attack with Donna after learning a secret about Eric. Will the blonde cower in the face of her honey bear’s wife and her wrath, or will she lock horns and fight for the “love of her life”?

Yikes! Steffy flips out at Hope for meddling in her decision about Sheila to Finn. If you’re wondering what the clash might look like, perhaps you’ll find clues in our photos of Steffy and Hope’s rivalry through the years.

Quinn’s ultimatum about Donna catches Eric off-guard. It kinda sounds like she might want her rival fired and for Eric to never see her again. But is that really fair, considering that he allowed Quinn to see Carter when she was feeling unfulfilled? What’s good for the goose…

Donna is hopeful and excited that Eric wants to reunite, but will a reconciliation really be in the cards? It almost seems too easy, so color us skeptical that the middle Logan sister will get her “happily ever after.”

When Hope and Steffy get heated about Deacon and Sheila, will Finn and Liam get involved? And if so, will the beleaguered hubbies side with their respective spouses or defect, making a bad situation even worse?! Oh nooo… could we about to be forced to add an item to our long list of Liam’s most boneheaded moves of all time (itemized in this facepalm-inducing photo album)?

When Sheila reveals the next part of her master plan to an incredulous Deacon, we have to wonder if this is will be where he’ll decide to get off the ride. Or should we say attempt to get off, given that Sheila has already warned him that she always gets what she wants! (Hmm… is that why she was able to reunite with Eric… and is so close to daughter Mary… and put Lauren Fenmore six feet under… and… )

In an emotional display, Brooke dives into her and Deacon’s past with their daughter, Hope. This sounds like a fun walk down memory lane for us and an eye-opener, perhaps, for her daughter. Will Hope’s determination to forge a relationship with her father be swayed by what her mother shares with her? Wonder what Hope would think if she knew the whole story about Deacon — as in the one that we reveal in our photo gallery of his misspent life.

Really, guys? Good luck with that! After Ridge and Liam make a pact about Steffy, Hope and Brooke, it’s a safe bet that the guys’ mettle will be tested.

Deacon frustrates a scheming Sheila by making a bold move of his own. It’s a calculated risk if there ever was one, given that the she-devil’s

accomplices tend to end up dead when they displease her. Should Deacon need a reminder of just how dangerous Sheila is, this photo gallery of her reigns of terror might bring him chillingly up to speed.

Realizing that soap operas have become an industry and that those writing for soap sites and magazines are dependent on soaps being around for their living, it never ceases to amaze me how very much they gild the lily in their spoilers, actually tyring to make this hot mess of a show look worthwhile.

@stevieb  Your right.  The weekly spoilers are better than the show itself and draw me in everytime. lol.

Quinn had Donna terrified. Eric is finally get to see his loony toon wife's

true colors. Quinn is best when she is crazy, otherwise boring.

Can't wait until she stumbles upon Carter and Katie. That should be good.

I 100% agree. I love evil Quinn. Now, if they just will make Dollar Bill Spencer evil again. I hate this lovesick puppy act for Katie. Something needs to save this show.

Wish Carter and Katie would start a relationship at the same time Eric sends Quinn packing. How can she demand that Donna lose her job when Quinn carried on with Carter in the office?

Yes, Yes Quinn is at her best when the crazy comes out and I feel it will now.  Last Friday's episode with Quinn pushing the green chair closer and closer to Donna  with each rant was priceless.  Donna was like a deer in the headlights!

Looks like haircuts all around.  First Liam with a 'buzz' cut, and now Hope with wispy bangs.

Hope looks horrible with those heavy bangs. Maybe its just a

Is this outfit appropriate for the office? Steffy looks like a fool

in that skimpy thing. Looks like shorts. How do they sit? Must

stand all day or hide behind the desk. Oh yeah, their work day lasts

of the day then take off and go back home. 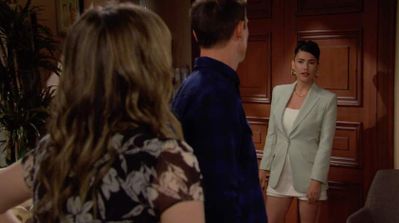 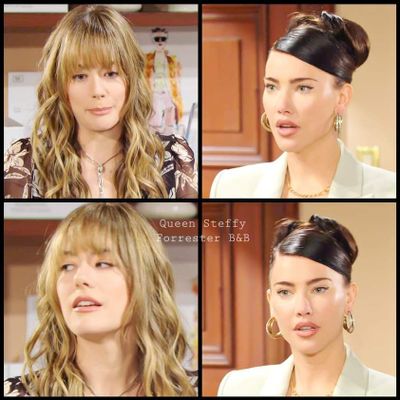