Auto-suggest helps you quickly narrow down your search results by suggesting possible matches as you type.
Showing results for
Search instead for
Do you mean
Reply
Topic Options
Reever
Respected Contributor

Terrible news, the actress has revealed she has a Stage 4 cancer diagnosis.  If you recall about 3 years ago she went into remission from breast cancer but now it seems to have come back and spread.  She said she publicly revealed the diagnosis because she is involved in a lawsuit with State Farm Insurance regarding the Calfornia wild fires and court documents would be made public referencing her cancer.

I contunue to call for action to rid our lives of Cancer, It seems ti be increasing with no cure in sight,  Where is the research and development funding going ?  Why cant they do something.  I am calling for scientists everywhere to find a cure,

I saw that this morning on GMA and my heart broke for her.

I'll keep my opinion to myself about the research, etc.

What a scary and sad diagnosis to receive.  My heart goes out to her.  I hope she can receive treatment that helps, any pain is managed well, and she is able to find peace in her heart.  God bless her.

I think we can guess where the donated money is going and why scientists and doctors don't seem to be finding anything close to a cure...

My heart aches for her!!  The truth is as long as cancer remains a multi billion dollar industry there will be no cure.

Cancer is a big business, and for-profit in many cases.  TPTB would seem to have little motivation to find a cure; they can make a lot of money just treating folks.  It's not good.

I'm sorry to hear that and my prayers are with her but she's totally wrong about cancer.  I understand that she sees this from her own perspective but there have been amazing progress in the diagnosis and treatment and survival rates of many  cancers.  What was once a terminal illness, no longer is.  There current treatments just a few years ago, didn't even exist.  There are new treatments, drugs, surgeries coming online every day...or so it seems.  "Cancer" is not a single disease and there are a multitude of factors that effect an individuals response to treatment.  So, it's unlikely that we will ever see a total cure for every form of cancer for every individual.

I think we can guess where the donated money is going and why scientists and doctors don't seem to be finding anything close to a cure...

Cancer has been around at least since the Triassic Period, some 250 million years ago. The findings were recently published in JAMA Oncology. The researchers used paleopathology, the study of ancient disease, to study cancer across the phylogenetic tree.

I really would not blame anyone for not finding THE CURE.  I think it is much more complicated than that.

I found this blog interesting:

Blog How Long Have We Been Plagued by Cancer?

Written by guest blogger and Canary Intern Abbie Lieberman, who researched and wrote this brief history.

Although there has been a surge in the prevalence of cancer in recent decades, cancer has actually been affecting people for centuries. The first documented case of cancer comes from ancient Egypt. According to the American Cancer Society, there are eight documented cases of breast cancer found on papyrus dating all the way back to 3000 B.C. Even the term cancer has been around for centuries— Hippocrates, the Greek physician who is widely considered the Father of Medicine, used the words carcinos and carcinoma to describe tumors. These Greek terms were also used to describe the crab because Hippocrates thought that tumors resembled crabs. 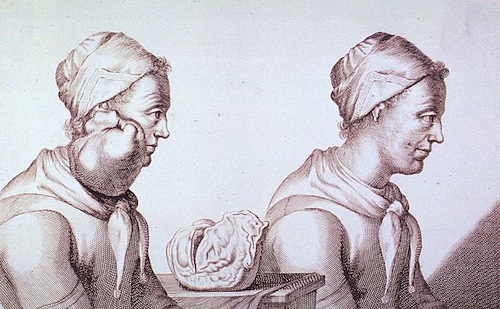 Two views of Clara Jacobi, a Dutch woman who had a tumor removed from
her neck in 1689. Includes text which describes the tumor and its removal.

Despite its long history, cancer is often considered a modern disease because its impact on modern society is much more substantial than its impact on previous peoples. In Steve Shapin’s article Cancer World, he expresses his view that “the rise in cancer mortality is, in its way, very good news.” Although this statement may seem unsettling, he does make a strong point. Part of the reason cancer has become a primary cause of death in the United States is because we live so much longer than we used to.  As a society we are more protected against sweeping infectious diseases; we live long enough for cancer to express itself.  Shapin traces our modern fight against cancer back to 1971 when President Nixon declared the War on Cancer. Even though the United States (or any country) has yet to win the “war,” this political effort did successfully strengthen the national effort against cancer.

Humans have been dealing with cancer for as long as we know. The ancient Egyptians concluded back in 1600 B.C. that “there is no treatment” for the disease. Although we have yet to discover a cure for cancer, society has made great progress in the way of treatment. While past societies could only attempt to treat cancers visible on the surface of the body, today Canary Foundation is working on technology that will allow doctors to detect, eliminate or treat tumors the size of a blueberry! Though there is a still a way to go in the fight against cancer, the progress made in even the last 50 years is remarkable. With advances in early detection research and technology, Canary Foundation aims to take cancer treatment to an entirely new level. By tackling the disease in its earliest stages, invasive treatments in the later stages will no longer be necessary. It’s just a matter of time until researchers find a way to impede cancer in the same way scientists have found ways to constrain the major causes of death throughout history.

This blog was authored by Abbie Lieberman, Development Intern.