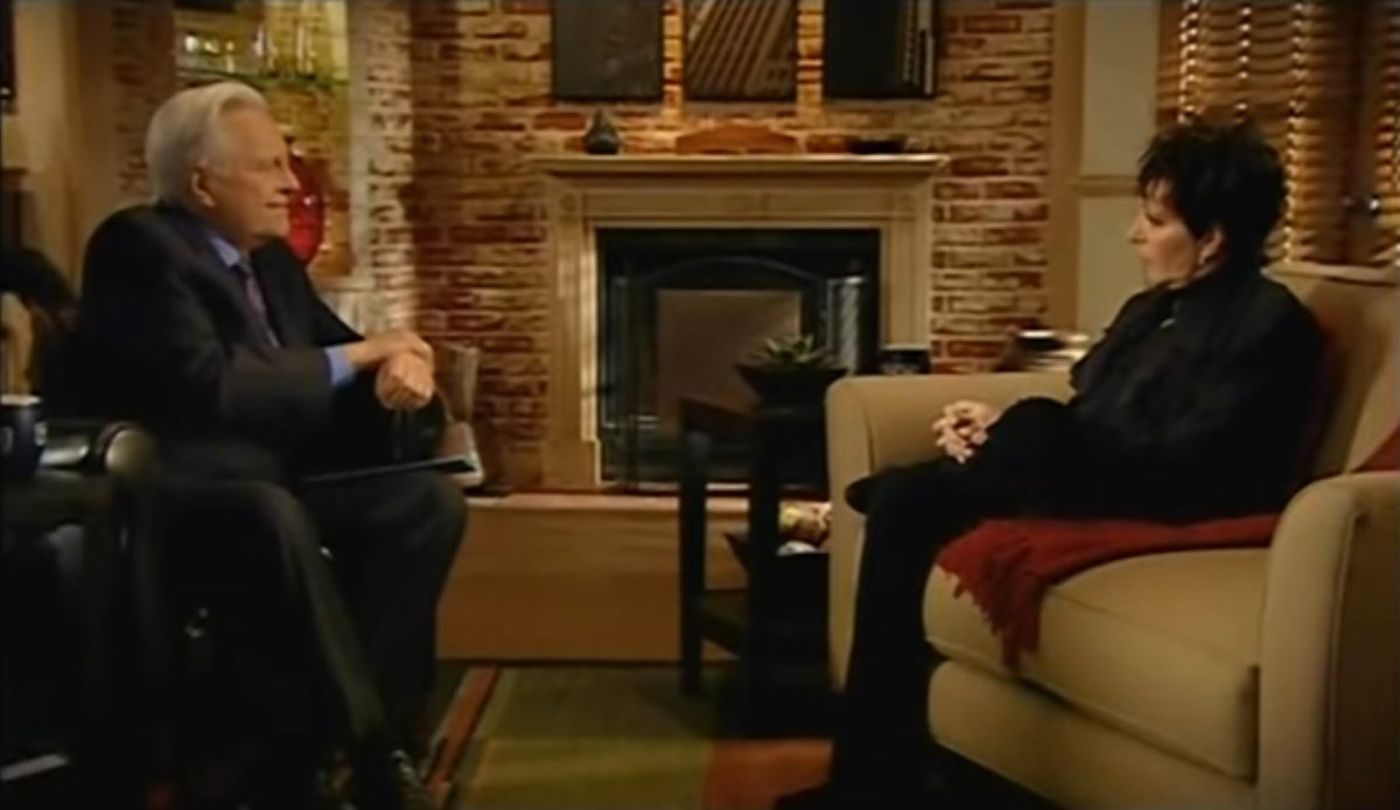 Of course, Robert Osborne had more than one sit-down with Liza Minelli, but this is the one from 2010, in his intimate interview format, "Private Screenings".

I think I remember bits and pieces of this.  Liza is not dropping bombshells here, but I never find her less than interesting as an interview subject.  And here of course, she has the ideal conversationalist in courtly, knowledgeable Robert Osborne.

Liza is a compulsively watchable, mercurial personality in her own right, but I like to hear her on the subject of her parents.  How many theatrical personalities also have BOTH parents who are pretty much equally lauded (in their separate fields)  in the "biz", as Judy Garland and director Vincente Minelli were.  The offspring of such a union has much to offer anyone interested in classic Hollywood.

Although I'm pretty sure I've seen this one, I'll be recording.

I love that picture alone with Liza on the davenport.

I have seen it numerous times. But would gladly watch it again.

I wish that someday TCM would show all their Private Screenings. Just a day of Robert Osborne and all his different guests.

YEAH! It is available in Watch TCM.

Going to watch it right now.

Oh, good, @drizzella .  I love when she's giving her parents' advice to her on acting.  Interesting hearing her discuss Kay Thompson (the "Think Pink" magazine editor in "Funny Face") whom so many performers respected.

Liza didn't mention this, but Kay Thompson mentored Andy Williams and his brothers when they started out, and formed a night club act with them that was wildly successful.  I was surprised that Kay Thompson had a covert, long-term romance with Andy Williams, which started when he was only 19 and she was 38.  I would not have pictured them as a couple!  When he married Claudine Longet, their professional association ceased, and she moved to Rome.  Fascinating story there!

And OH MY! I did not have a clue about Kay Thompson and Andy Williams. I must say that she seemed to be a big help to his career.

I give Minelli a tremendous amount of credit.  She paid off all of her mother's debts when she died.  Kay Thompson lived with Minelli and was supported by Minelli until Thompson passed away and then Minelli supported her stepmother as well until her death.  Amazing!

I just read an article about Vincente Minelli's mansion in Beverly Hills. The house where Liza Minelli grew up. It has been abandoned since Lee Anderson (Vincente Minelli's last wife) died in 2009. She was 100 years old.

After Lee Anderson died the only people that have lived in the mansion were squatters. Whoever bought the house never moved in. So the house is empty and deteriorating.

Wow, what a shame, @drizzella .  Having been Vincente Minelli's house, I can just imagine the treasures it must have held, with his elevated and infinitely imaginative design sense....