Auto-suggest helps you quickly narrow down your search results by suggesting possible matches as you type.
Showing results for
Search instead for
Do you mean
Reply
Topic Options
Highlighted
dooBdoo
Honored Contributor

@Sweetbabyjane, I believe you were the one who mentioned the Facebook group.  I just wanted to mention that I "Liked" the page and I did not end up with any spoilers in my newsfeed.  An hour or two before the show aired here there was a post to plug the upcoming episode and that was all.  Now, had I commented to that post I would've then had notifications every time anybody else commented on that post, but I could ignore them or even turn them off if I wanted to.

@Icegoddess,   Is this a public group we can follow?   I'd be interested in looking, if you don't mind sharing the name.😊

The name of the group on Facebook is Project Runway on Bravo.

Hey @dooBdoo so good to see you my friend and your always wonderful information and more importantly insights!

Thank you for putting into words what has been rattling around in my noggin.  I agree for me the connection between Sebastian and Leeann's designs are their meticulous detail and impeccable crafting.

This is more than slightly off topic but I once read the costumes that Bob Mackie designed for Carol Burnette were so beautifully made you could wear them inside out and that's what I think about when I see their designs floating down the runway.  Nothing is left to chance.  Again, I hope he gets some rest and crafts a collection of what I believe he is capable of creating.

Ok, after reading through everyone's posts these past couple of days I am pumped for the finale!

Hey, my friend!    Thanks for the kind words.❤️    Always so good to see you, too!    I'm not surprised to hear that Bob Mackie was/is so meticulous.   I'm pumped for the finale, also!    I expect it to be a good one.   I always enjoy seeing the home visits in the weeks before the final runway.    There used to be "road to the runway" videos aired or available prior to the season, with home visits and intros to all the designers -- I think they gave us good perspective and insight into the reasons the individuals were chosen, and I wish they would bring it back in future seasons.    (Oh, dear, I need to slow down...   I'm already looking ahead!🙃😉)

How do you all remember each cast member and who did what to whom? From years ago...

I remember plotlines from every I love Lucy episode but that's bc I probably watched each one so many times.

I don't follow fashion as much as I used to which consists of thumbing through some magazines. Never followed who showed what at where. Kudos to you @LoriLori for having the gumption to do all the research and spoon feeding it to me.

I would be lost at Mood - you'll find me in the corner playing with Swatch while you ladies shop. I can't sew except for stitching a fallen hem or a button. There was a home eco class I took and the item I sew was hideous. Never attempted anything again.

The Cher show plays homage to him in a number with all the costumes he designed for her over the years.

Great show to catch when you are done shopping at Mood

@yahooey,  I was a PR fan from the early days, and every time I ran across any of the shows re-aired I was there watching...  also kept an eye out for their availability with On Demand, and now and then searched for articles online.    So, I probably have a cache of random goofy PR trivia taking up space in my brain. 😛    I agree with you, @LoriLori shares such splendid details, history, background, and associated commentary to these threads, and I appreciate that so much.

Wouldn't it be wonderful to see the Cher show?   I'm a Bob Mackie fan, and I think he deserves that Tony.   I'll be watching the show and cheering for him.😊

although I'm not naturally talented - I do appreicate people who are bestowed gifts.

I love the movement of dance - ballet and I fall down wearing flats. i'm going to see Jane Eyre next week at Lincoln Center - so excited

It is there I saw the cow parade, Sue the TRex, travel exhibits of Dead Sea Scrolls,  Degas and King Tut (2nd time it came around). Even did a self guided foot tour of Frank LLoyd Wright houses. Always on the lookout to see what they offered

I only visited Chicago once or twice a year and less than 10 times total but I made sure each visit counted.

Met Museum - My favorite place to contiemplate was The American Wing filled with huge stain glass from Tiffany & others and no one visited there but now it is converted to a cafeteria for $$$.

Was floored by the Louvre but not what you think - it was up and down stairscases which sometimes led to nowhere - gosh don't they believe in a level floor. Loved The Rodin Museum.

So count me in for your trip - I can ooh and ahh but perhaps not knowing the artist's names. So what else is new....

@yahooey,   Oh, gosh!   I haven't thought about the Chicago cows in a long time!   I'm jealous of your Frank Lloyd Wright tours.   Such fun to read your museum memories!   One of my favorite shows was at the Chicago Art Museum, a Van Gogh and Gauguin exhibit offering a look into their time together and the work they produced at that moment in time.   The Field Museum always lured me into the Hall of Gems...   In Florence, the Uffizi is my favorite.   In Paris, the Musée d'Orsay...   and, of course, the Louvre, and Sainte-Chapelle's windows.   I've spent countless hours in all of the Smithsonian museums and galleries -- many trips there for work and for pleasure, and I don't think I ever missed visiting part of the Smithsonian offerings.    Love the Corcoran, too.   NYC...  gosh, hard to pick!   ​ The Met's Cloisters and the Guggenheim are 2 favorites, but there's so much to see at every turn in that wonderful city.

For performing arts, for years I loved attending the magnificent Charleston, S.C., Spoleto Festival.   That's a brilliantly creative atmosphere that makes me wish I could live there...  I'd enjoy being a part of the volunteer team involved year-round.   I want to add that we have some lovely local museums and galleries, and also exhibits at nearby universities -- the students and faculty are gifted, and often overlooked.    Thanks for your post!    Sorry to go on and on!   You've really got me inspired, now!

Ladies, nothing to contribute but I'e enjoyed reading your posts about sewing class and cooking class fails!  I'm glad I wasn't made to take those. So funny, the French toast fail, fused legs, etc. and Cali going that's it, it's woodshop for me!,

Thanks for the education about your educations and the entertainment.

Where do I start? Loved your poss about museums and dance and all of it.  Wrote an epic response but you know what, you said it all.  So impressed with you both and loved hearing specifics about your taste.

The cow sculptures, is that the Cow Parade ones?

Back to our show for a sec:

I have a lot of the Project Runway stuff in my head.  I'll Google something I'm not sure of or to find something like the Westwood (not the best example but the quickest best) and the McQueen (had to have that one).  Or to give background or quote someone correctly.

Over the years things and people i loved or didn't and some of the drama which I don't like but it sticks...That twin wasn't even worth a Google to me and I'm glad someone (sorry, can't remember who added details abot the shorts).

Andy/Ari South, and the Japanese cult pattern book, that was hard to find because it wasn't the blogs themselves that uncovered it, it was one commenter and then others and they posted much better pics than I could find.

Interlude:  Back to our show:

Cali, ou said this way upthread and I was reminded of it this weekend, you said:

"So...since the taping schedule doesn't coincide with the ACTUAL NYFW, is this just a FAKE NYFW they create for the finale? Color me Confused in California! 🙃"

Bbut check this out.

Alexander Wang did this this weekend, held his show at an off-Fashion Week date and at Rockefeller Center!  And he invited the public!  He does mens and women's wear and had fierce models and what a treat, it's worth the read, he really did it up: 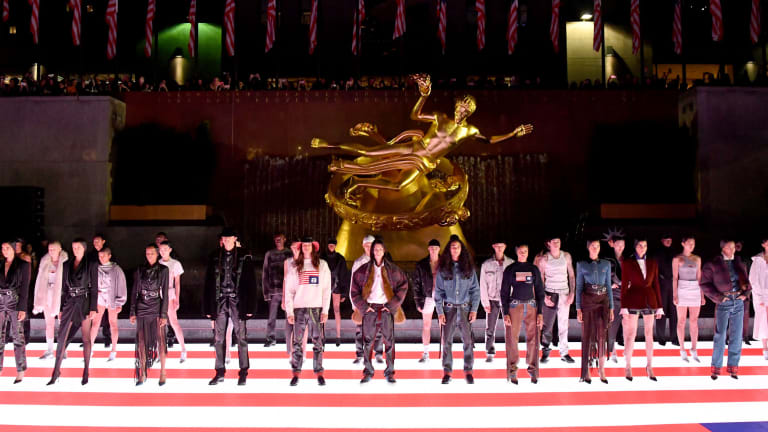 Got tons of press and goodwill (although in a picture I saw of Anna Wintour she's making a frowny face, natch).

With the CFDA having announced that they're cutting back on the number of shows at NYFW  -- well, I'll let them speak for themselves, it's gotten tons of press but I like this one:

Alternative venues never went away because even with a very crowded NYFW many didn't make the cut and did restaurants, art galleries and for the smaller and most creative brands all kinds of fun things.. But those were for those who couldn't get into NYFW.

But with these big changes by CFDA alternative venues will be necessary for medium- and larger brands too.  A few annoyed brands have even pulled out.

So it will be back to Lady Lucile's first mannequin parades in her garden which became all-out shows with themes for the shows (not the clothes!) including Russian ballet.

If PR came up with an creative and fun idea, they'll be doing something in fashion's past, present and in New York, a lot more of in the future.  I gues a lot will depend on how much money they put into it.  If they do it on set I'll be super disappointed and I'm sure I'm not alone.

Hope I didn't interrupt the flow of your fun stories!!!!