Auto-suggest helps you quickly narrow down your search results by suggesting possible matches as you type.
Showing results for
Search instead for
Do you mean
Reply
Topic Options
Highlighted
dooBdoo
Honored Contributor

I loved Garo's dress and am so glad he won.  Overall, he is my favorite designer.  I really liked Sebastian's as well but it looked like most of Leanne Marshall's collection from the finale on Season 5.

@shoptilyadropagain, @Sweetbabyjane,  She came to mind for me immediately, too.😊

@mtc
Love the Dyson comment re: Sebastian! Hilarious! Agree with you...his dress was bad, his room was worse.

Once again, Christian's suggestion to a contestant helped the garmet catch the eye of the judges...He suggested Tessa use another color in her terracotta design, such as the purples, and she chose lavender; The Bergdorf Goodman judge commended the use of that color is Tessa's outfit, calling it "counter-intuitive."

My absolute favorite part of this Bravo reboot is the way they brought out, in order, all of the designers' previous garments for us to remember, instead of just flashing quick images on the screen. Doing that really allows the judges and the audience to see growth, design progression, aesthetic continuity, etc. Love!

Ready for the Christian home visits and the Hester sewing accident and the Bishme crying jag and all the drama of a finale. Yay! Sounds like the judges want Hester for The Win.

@yahooey
See...that would have been utilitarian and cool and may have made Hester's skirt design actually interesting: unpin the bottom fabric and turn that into a picnic blanket!! So creative! Well-done, Ms. Yahooey.
Garo's design and room was a mashup of future and retro to me...I saw references to 2001: A Space Odyssey; Roman Polanski's "Repulsion" with the arms coming out of the wall; Jane Fonda in Barbarella; and Carnaby Street in London, circa 1969. His model looked like Sharon Tate to me.
Loved that snakeskin corset, and loved how Nina admitted she was unrelenting in her criticism of Garo. (They even replayed the clip of her disparaging him.)
Report Inappropriate Content
Message 33 of 118 (264 Views)
Reply
3 Hearts
Highlighted
GoinBacktoCali
Trusted Contributor

I am going back to find Leanne Marshall's season on PR...I don't know who she is! Must find her.

I don't remember Leann either - I barely remember who was on this season.-

Leann's collection from PR - 8 yrs ago

gosh you guys have great memories @yahooey
Thank you for posting this!
I don't have a great memory at all...I always summon @LoriLori, who DOES have a great memory...and she is gracious enough to respond and post! ❤
Report Inappropriate Content
Message 36 of 118 (241 Views)
Reply
3 Hearts
Highlighted
LoriLori
Honored Contributor

Cali,  oh hush with the compliments, I was headed here anywway to apologize for being WRONG about the five weeks AND five collections.  Thank you for for pointing that out with your trademark humor and diplomacy.

One more challenge and no surprise, it's an eleventh look.

Still so curious where the finale is.   Karlie never said "Fashion Week". -- -- and NY Fall/Winter Fasihion Week was February 8-16 so counting back  it still seems like the timing is wonky...

...buit but I've been wrong before, twice just in this thread LOL.

I don't see similarities between Sebastian and Leanne except maybe their impeccable sewing.  Leanne's petals weren't the big deal that was made about  them -- they were nothing new -- and she put them on so many of her garments.  But like Sebastian's best work they were lovely pieces, beautifully done.

I have no sense of who Sebastian is as a designer because he hasn't thrived in competition.

But the piece he did before on the show and sort of fell back on last night reminded me of McQueen when he went sculptural.  (Which Leanne wasn't capable of.)  There's probably many other designers who have done similar stuff and I'm just not familiar with.tthose garments.   But I can't help feeling in both those pieces Sebastian was inspired by McQueen;s. 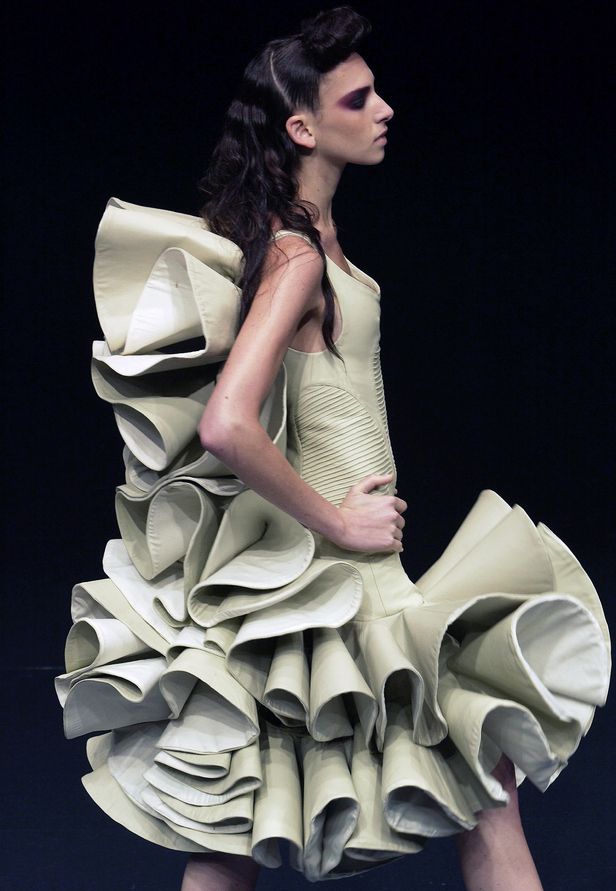 As for Hester a few people have said they think she's trying to be like Bestsey Johnson but I disagree.  She's cray like her but so others been.   When I look at Hester's stuff, done under pressure, I see more of a 90s Vivienne Westwood inspiration:

Here's a piece from 90s Westwood: 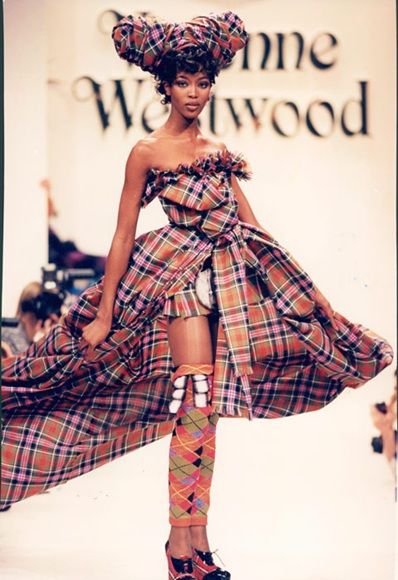 After Doob let us know last week that Garo had six episodes of his very own show on Sundance which led to learning his background is so much more than the B&D bondage costumes he spoke of (including custom costumes and bridal (!) along with the drag queen and bondage stuff)..

Knowing Garo's already had his own show helps explain how he was by far the most relaxed.  It's also part of his personality for sure.

So I looked into Hester's background and saw a lot of stuff she did when she lived in NY that was creative, fresh and all hers.  Which makes me even more excited to see her collection.

Like Sebastian, Hester hasn't done well in the pressure of the competition.  I knew he wouldn't leave but he hasn't thrived in the PR setting which is why he used an idea he had already gotten praise for.

Hester, she hasn't done well in the pressure either -- and there's no way they can predict who will or won't -- but on top of all the other pressures it  must have been so hard to be far from her sick father.

She loves him so much she gave up what I learned was years of building a name (which once was Hester Funshine LOL) in  NY, mostly in performance art-y stuff,  to go back to New Mexico and be with him.  He probably told her to follow her dreams.  I hope Christian gets to meet him and we can...

...and she can once again express herself away from compettition in the five freaking months and we get to see where she's really at.

@Sweetbabyjane, I believe you were the one who mentioned the Facebook group.  I just wanted to mention that I "Liked" the page and I did not end up with any spoilers in my newsfeed.  An hour or two before the show aired here there was a post to plug the upcoming episode and that was all.  Now, had I commented to that post I would've then had notifications every time anybody else commented on that post, but I could ignore them or even turn them off if I wanted to.