That should be interesting.

I was always amazed at how people would always say how good looking Ted Bundy was.    No he wasn't!  He had Charles Manson eyes and he was pretty creepy looking - to me, anyway.  Maybe it's partially because I can see into people but I sure as heck never saw him as good looking.

There's also a mini series on Prime Video based on her book - available starting today.

Mark Harmon made him "handsome."

@SeaMaiden I plan to watch...were you living in Seattle st that time? 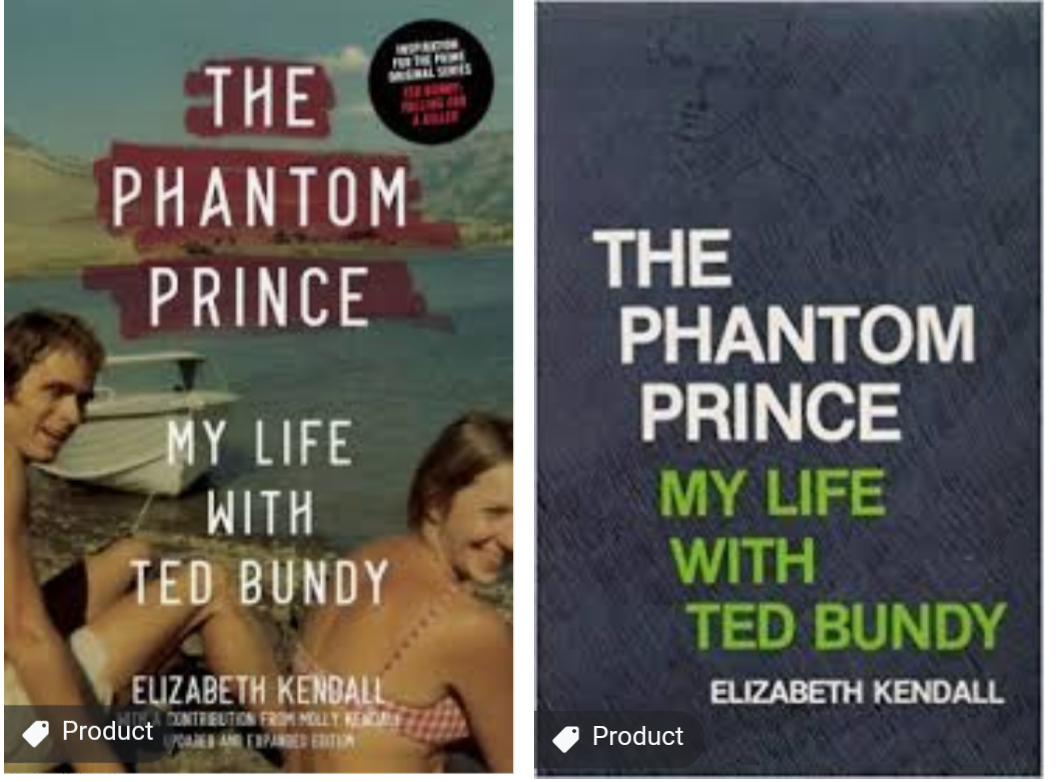 As is often the case, there's a book being hawked, and this is no exception. Kendall has re-released hers (above, left), an almost 40-year-old book (above, right) on her life with Bundy, "updated" with contributions from her daughter. I read about it a couple of months ago, and didn't learn anything new. Not that I expected to lol.

Still, everything about that freak still interests all of us. But, as noted above, there was nothing good-looking about this guy. Yes, that's subjective, but it's simply another easy fallacy, promoted to romanticize a killer whose "success" had more to do with his taking advantage of naive young women than it did with his being handsome. (Hollywood loves the Mark Harmon effect.) He had horrible, jankety teeth, skinny, feminine hands, and often dressed in a way which made him look like Ed Grimley. And his affected manner of speaking? Yuck.

Romanticizing his appearance was just one way for the press and, often, authors writing books about him (most notably, Ann Rule) to weave a tale of intrigue (and lies). He was supposed to be "personable," an "up and coming" politician, lawyer etc., too. Except that he wasn't. He was a flippin' driver for a local politico, and a lousy student--not surprisingly, choosing campus life only for its "easy pickings." And that "ease " with people was entirely manufactured. From an early age, he was socially awkward, and not just with girls and women.

Another fallacy was the "long, straight, dark hair, parted in the middle" nonsense. Interestingly, Kendall, herself, has always been pointed to as the impetus for his rage. But she had strawberry blond hair lol, that style wasn't exactly uncommon at the time, and his victims had brown hair, red hair, blond hair, long hair, short hair, curly hair, bangs...they needed only to be female.

I have to say, though, these 20/20 retrospectives have been (I think) well done and very interesting in the past (My favorite was their early one on Robert Blake). I'm just saying that, rather than hearing from Kendall (again) who's hawking a book, it might've been interesting to hear the chilling tale, for example, of one of his true victims--Carol DaRonch, who really lived to tell, and who certainly would never be referring to him as a "prince."

I lived in Utah when Bundy was doing his deeds and remember it quite well.  There is another girl who claims she escaped him and she has written her own book.  I did read it and found it to be creditable.

I did tune in and pretty much knew most of what was already covered in other shows about him. I absolutely did not think he was handsome or charismatic. He was a creepy looking guy with a deer in the headlights look about him. This is the first time I have seen his wife and her daughter interviewed and there was something not quite right about either one of them. I do not believe them when they claim he did not exhibit any signs of his sociopathy. I’m thinking they were afraid of him, more specifically the daughter.

It has been reported in other writings and documentaries that his grandfather, who was a horrifically abusive man was also his father. He thought his mother was his sister for years. Family of lunatics.

I'm recording it.  I've been obsessed with Ted Bundy since my college days when I first read about him.  I think he had already been captured for the final time at that time.  No obsessed with him in a romantic way, but with the serial killer aspect.  He was the first serial killer I had ever read about.

I hope the interview is good.  I'm not getting particularly good vibes from the commercial.  The murder channel did a mini-series on him a few years back and it was TERRIBLE.  I had an awful time following it.  They hid the fact that it was Ted Bundy to begin with although I had that part figured out from the beginning.  I think it was done mostly from the perspective of the investigator who eventually broke the case and did several interviews with him in prison, but the series was so uncohesive and jumped all over the place I had trouble following it.

The article that got me hooked on the Ted Bundy story was in Family Circle magazine I think.  It was very well done.

I did not see the Mark Harmon series.  I have a friend who could not watch MH in anything after that because all she could see was Ted Bundy.