Auto-suggest helps you quickly narrow down your search results by suggesting possible matches as you type.
Showing results for
Search instead for
Do you mean
Reply
Topic Options
Shawnie
Respected Contributor

Anyone heard when new season will be available on Prime?

I believe not until beginning of 2022 is what I read, unfortunately. Been such a time gap due to Covid.

I really hope so!  I had about given up looking for it.  The last episode really left her in a precarious spot as I remember.  Love her dad!

I love this show, cannot wait for it to be back.  I enjoyed it so much I am going to watch the whole thing again  from the beginning.

I can't wait for the return! I miss seeing all those beautiful outfits that Midge wears.

Kelly Bishop will appear in season 4.

The show shared a picture of Bishop in her Marvelous Mrs. Maisel costume, writing, "If looks could kill."

Milo Ventimiglia has joined the cast.

The This Is Us actor was spotted filming on set with Rachel Brosnahan (the actress behind Midge Maisel) on June 10. His exact role in season 4 is unclear but judging from the photos (below), he seems to be slated for multiple episodes and is likely playing a love interest—the two underwent numerous costume changes to film their scenes in a park. Ventimiglia previously collaborated with Maisel creator Amy Sherman-Palladino on Gilmore Girls. 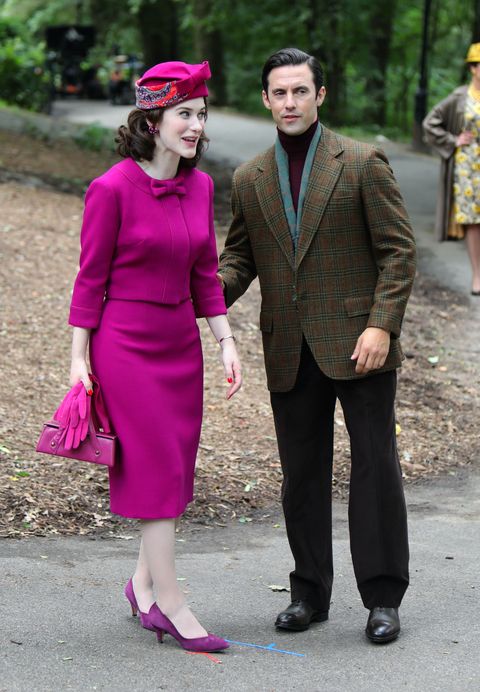 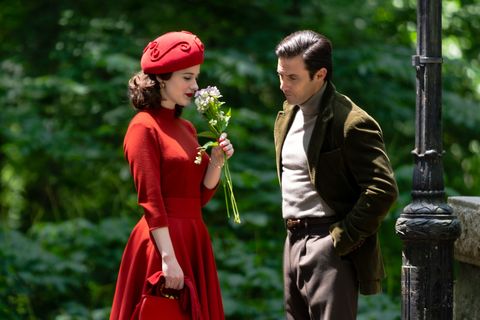 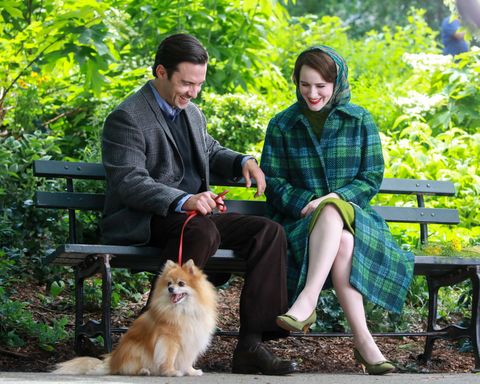 John Waters has joined the cast.

Waters will be appear in a guest starring role, with the exact nature of the character he is playing being kept under wraps. Waters is best known for his work behind the camera, having written and directed films like “Pink Flamingos,” “Hairspray,” “Cry-Baby,” and “Cecil B. Demented.” 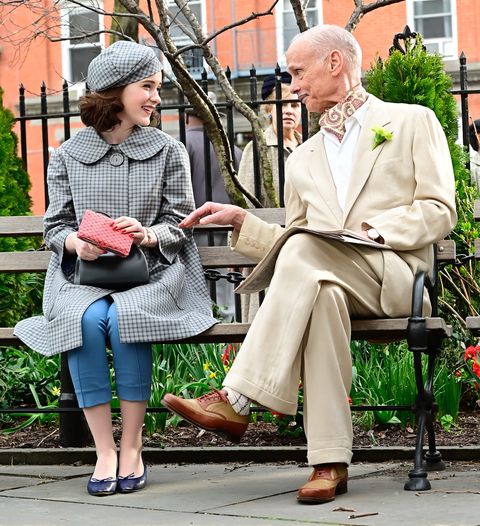 Production on Season 4 — delayed nearly a year due to COVID — got underway last January. Daniel Palladino previously told TVLine that although Maisel will look and feel like the same show when it returns, COVID protocols and restrictions will necessitate one creative tweak to the series’ ambitious production. “There will be a lot more visual effects because there are limits to what we can do,” he explained. “Last season, our premiere had 850 extras in an airplane hangar. We cannot do that.” 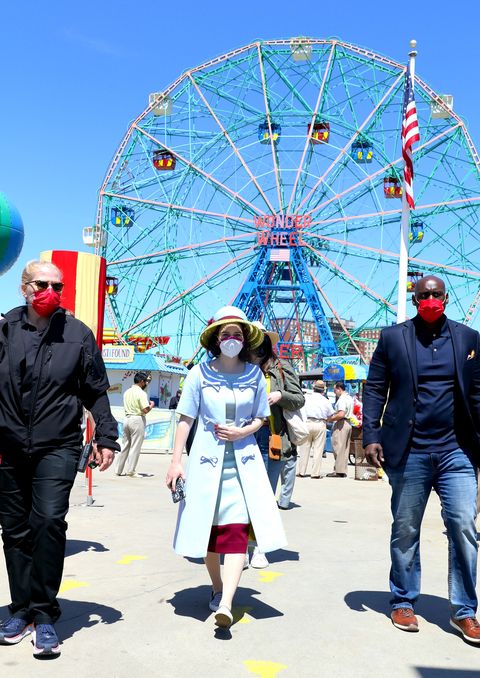 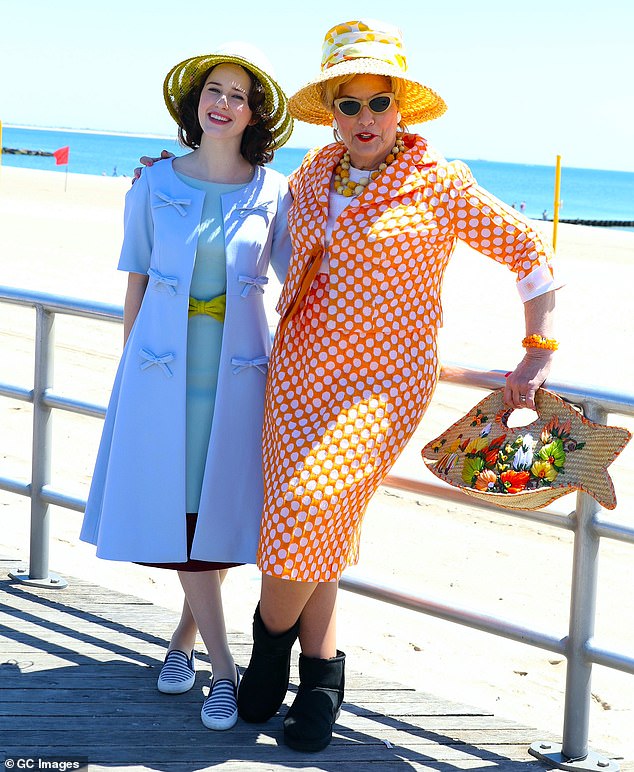 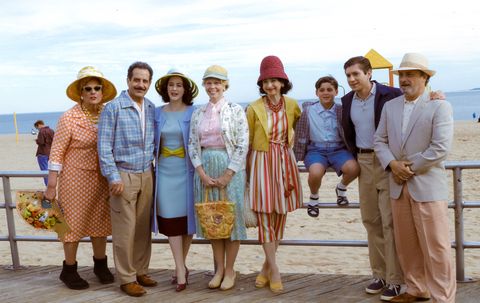 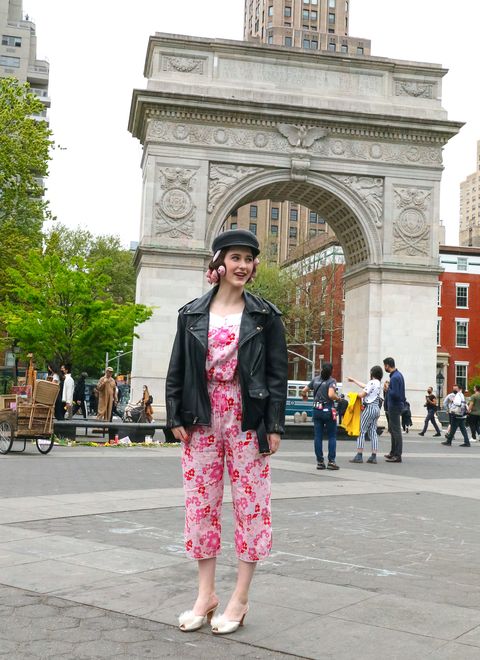 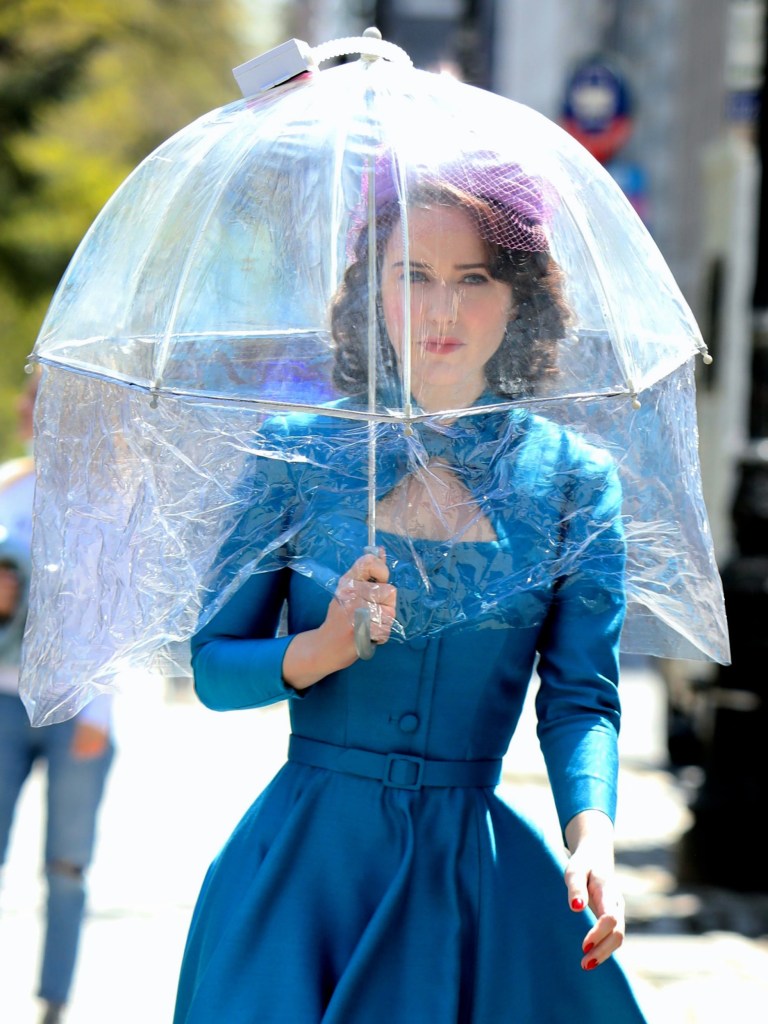 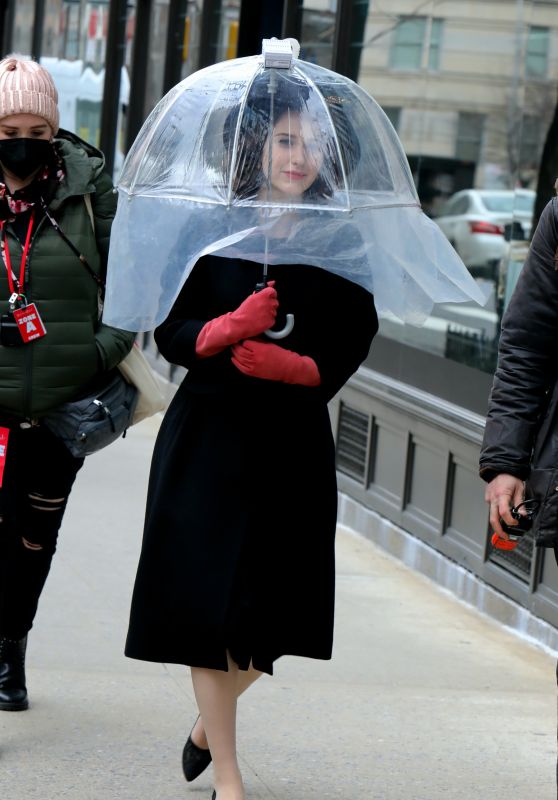 Filming in New York has been going on since January 2021... but with new on-set protocols.

Like every other film production, there’s now COVID-19 protocol to keep actors and crew safe during the pandemic. To reduce the number of people on set, there will be less background actors in scenes. Instead, computer-generated imagery will take their place, according to Deadline. (Yes, they can paint in extras now.)

Here's Rachel Brosnahan shown inside an umbrella-like bubble with what appears to be a HEPA filter to protect herself from particles of SARS-CoV-2. 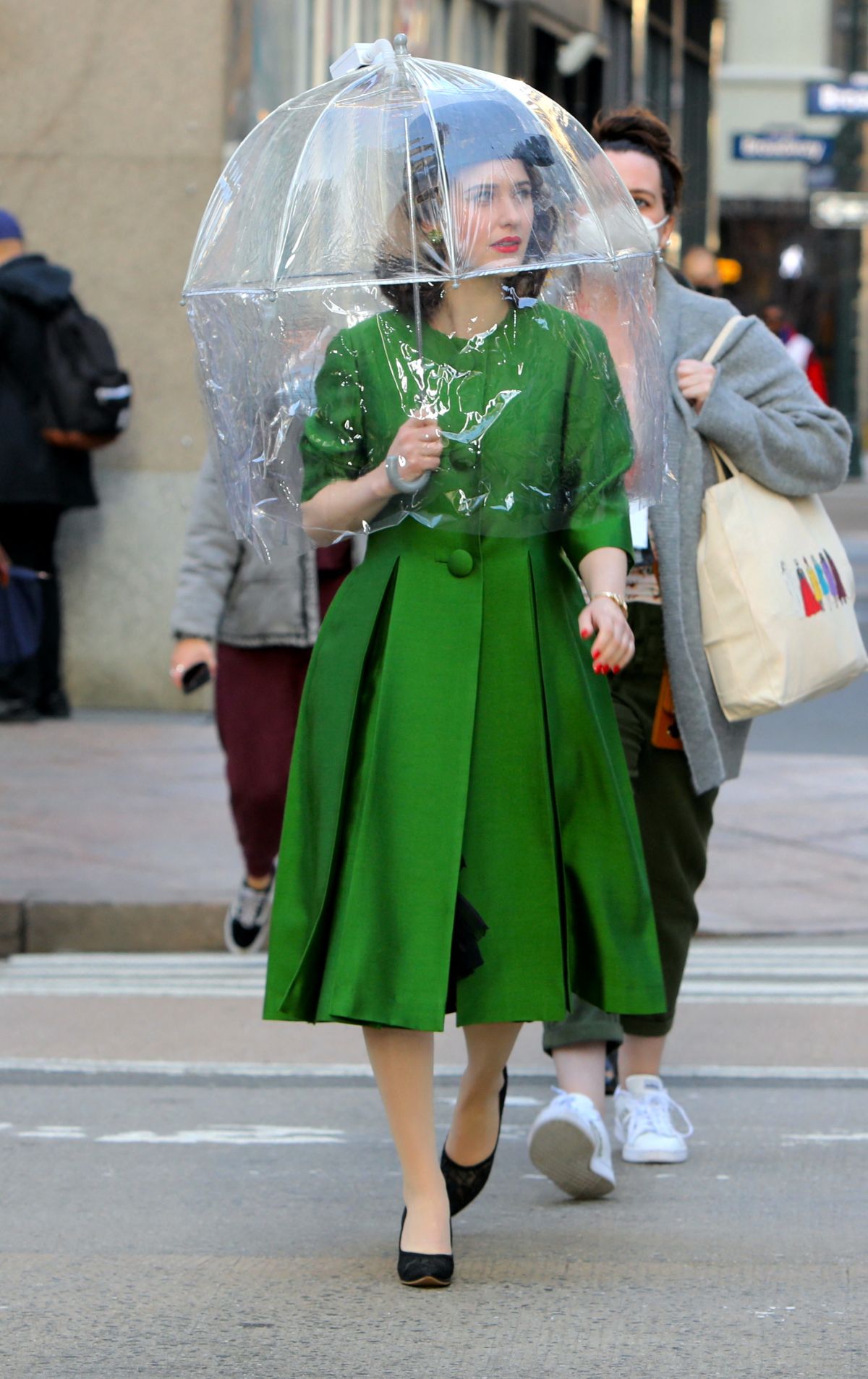 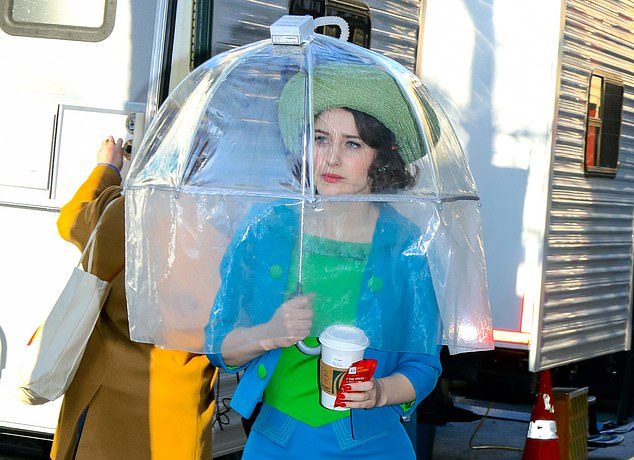 Per Backstage, the show was hiring extras to work in New York City through the end of June 2021. They have some pretty specific hair requirements…like no highlights or roots, and your hair length must be above your shoulders. "If hair touches shoulders, it will need to be cut by the hair dept." (Hello free haircut.) And sorry ladies, no visible tattoos.

Season four may premiere in December 2021.

Since filming is still in full swing due to the pandemic delays, it should come as no surprise that an official release date hasn't been announced, either. Still, with the current schedule, there is a chance the show could keep with its tradition of December premieres. Seasons two and three of Marvelous Mrs. Maisel premiered on December 5 and December 6, respectively. 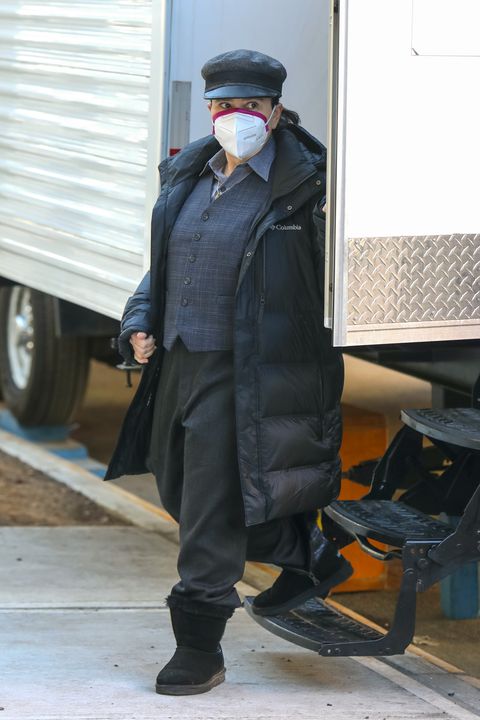 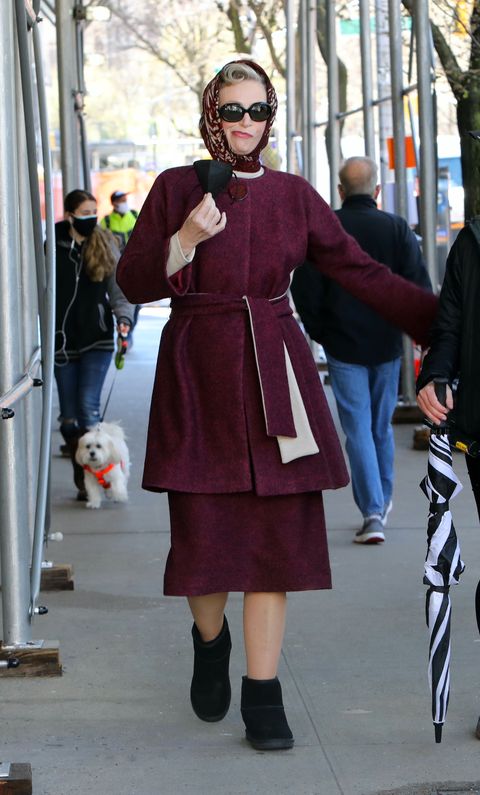 I would kill for her wardrobe!  The coats, dresses, shoes, bags, gloves, hats, etc., etc.  Reminded me of a time when women looked so feminine and gorgeous and the men so handsome with those suits and hats and trench coats.  I miss those days.  And the colors and paterns - Every time I watch this show I just wish we dressed like that now.  So tired of "casual" all the time everywhere you go.  Just stunning!

Awesome photos of the upcoming season!  I am a huge fan too! Thanks for sharing! 💝💝💝