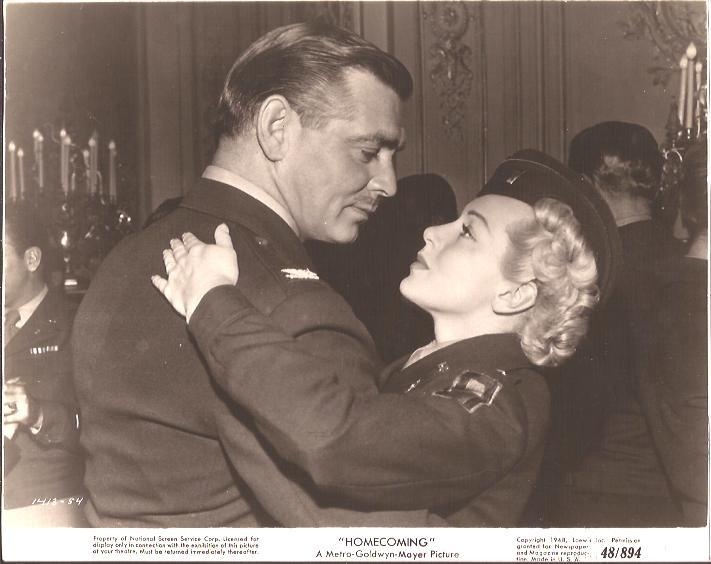 Always happy to see this, one of the best pairings of Gable and Turner, roll around.  Told partly in flashback, a doctor (Gable) who left his lucrative practice to serve in World War II, relates the story of his relationship with a spunky nurse (Turner).  He struggles with the attraction on the battle lines, while his socialite wife (Anne Baxter) at home worries about his potential for straying while at war...

Gable and Turner always have a kinetic chemistry, and here it's very effective.  The surprise to some people is how Lana plays down the glamour bit to come across as a spirited, warm, bruised but dedicated nurse, with the quirky nickname of "Snapshot".    She's terrific!

Anne Baxter makes the most of the thankless role of waiting wife, but adorable John Hodiak is again wasted in a relatively small role.  Maybe it was some compensation that the married-to-each-other-in-real-life Baxter and Hodiak got to work together? I did not realize that John Hodiak and Anne Baxter were married. I always liked John Hodiak.

I just read that he was voted "box office poison". Two years after Harvey Girls was released. I can't believe it.

I was also sad to read that he died at 41. I look forward to watching the movie. Quite a cast.

Never heard of this one before, sounds like my kind of movie.

Yeah, @drizzella and @Shelbelle,  it's a real sleeper of a wartime romance-- bittersweet and sad at times, but an excellent showcase for the talents of the principals....

That is the one thing I hate about movies shown at that time of day. My son made dinner last night, so I could watch most of the movie. But I still missed bits and pieces.

I missed whatever happened right before Clark Gable hobbled off the plane when he arrived home. And you could smell the uneasiness between them. But I had no idea why Clark Gable was walking with a cane.

It seems that is how I end up watching too many movies. I get the gist of the movie but I miss bits and pieces.

I enjoy this movie. Watch it almost every time it comes around-and have the DVD. Not a great movie, I just like Gable (like him in anything!) and Turner together and the movie has a good storyline.

I enjoyed it very much, Lana was no glamour girl in this one!!!