Auto-suggest helps you quickly narrow down your search results by suggesting possible matches as you type.
Showing results for
Search instead for
Do you mean
Reply
Topic Options
cowboy sam
Honored Contributor

I loved when Esme was talked to by Nic and the mayors husband...she left in a huff...love it when things don't go as she tells people what to do...her evil looks were ignored  lol!

Carly set Sonny straight...he was upset about her and Jason..until she reminded him that it was Nina  that kept them apart for 9months!

Okay I have a confession.  I have done kickboxing and other workouts in full make-up.  I went to kickboxing or the gym right from work so hair and make-up were done.

@LipstickDiva , I don't think that is uncommon.  For me, it was the makeup, itself.  I don't know that I have ever seen Maxie with that intense of shadow and those dramatic of lashes before.

Laurine Prince has been seen in multiple series, such as, Versace, Phoenix, Schooled, along with the popular TV show, American Crime Story.

Spoilers reveal Price debuted as Dallas Kerby on the October 4th episode of GH, alongside Dominic Zamprogna as Dante Falconeri and Kelly Monaco as Sam McCall.

Yes, because while she's very pretty this cast wasn't already bloated enough... Here's yet another character for which the writers can create compelling story... Whatever...

@steviebyes, she is pretty and we don't need her, but my personal.dream is she stays long enough to confess to Drew her part in his disappearance, they fall in love anyway, and she swoops him back to the Mediterranean with her. Bye!

@BeckiWV  I like the way you think but my only change would be it would somehow turn out it's Ninny that was involved in his disappearance, or maybe, as part of Drew's whole mind control thing, Peter makes him fall for Ninny... Either way, the two of them hit the trail... If I have to watch that woman give her Popeye look one more time I'm going to scream, so help me...

@stevieb I like the way YOU think! Sounds good to me 🤗

The Scoop: GH previews, teasers, and spoilers for the Week of October 18

A mystery man spies on Curtis and Portia 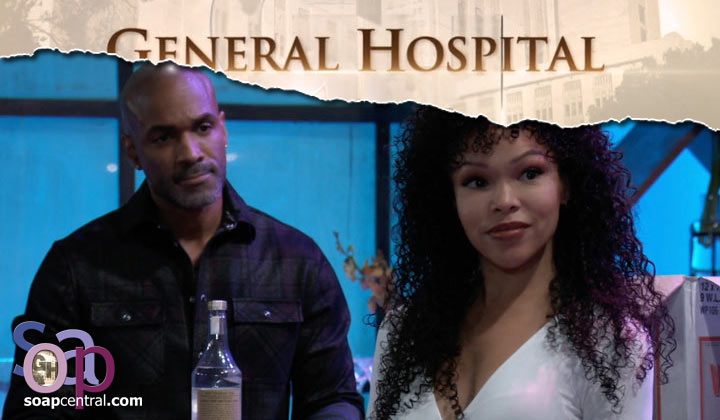 A sneak peek at some of the action that will take place on GH during the week of October 18, 2021.

Robert turns the heat up on Victor

Anna and Robert formulate their next move

Valentin gets a helping hand from Anna

Dante and Sam hit a roadblock

Dante and Sam are surprised by what they uncover

Curtis reflects on his past with Portia

A mystery man spies on Curtis and Portia

Nina turns to Curtis for support

Nina comes to a realization

Sonny reaches out to Spencer

Brook Lynn pats herself on the back

Jason heads to Greece with Britt

Willow is concerned about Michael

Finn and Liz feel the distance between them

Olivia and Ned have a talk about Leo

“In the End, we will remember not the words of our enemies,
but the silence of our friends.” ~ Dr. M L King Jr.
Report Inappropriate Content
Message 384 of 659 (370 Views)
Reply
9 Hearts
cowboy sam
Honored Contributor

My oh my... Nobody stirs the pot quite like my girl Ava...

she sure does  with Nina

plus...,love how she is treating spoiled brat Spencer!

next   want her to  go after wanna be evil girl Esme!!!lol   Throw her butt also in jail for torching your car!

Happy Birthday @Xivambala I hope you have a wonderful day doing things you love with people you love.

On an aside-my best friend from college shares your birth date and her sister in law at the time had a birthday on the 14th-so the three of us used to party all month long as my bd is in October also. Great memories!

"Outside of a dog, a book is man's best friend. Inside of a dog it's too dark to read."
Groucho Marx
Report Inappropriate Content
Message 386 of 659 (330 Views)
Reply
7 Hearts
Wsmom
Respected Contributor

Happy Birthday, @Xivambala !  I hope you have a wonderful day!

The coming week doesn't look to offer much of interest, at least not to me... Seems like most of the focus will be on the alleged super agents, along with Dante and Boobsie, bumbling around in Europe, soon to be joined, it seems, but Brit and Jason... Most of the rest looks like just so much filler, as if all the above isn't filler enough... Big yawn...

We celebrate for weeks.  We call them Hanukkah birthdays...

I've never understood people who get all ornery on their birthday.

OK I'll put it this way.  You either have a birthday or you're dead.

Or..how about this, "Every day above ground is a good day".  I like that one best.

Go and celebrate and be happy.

@mysoutherncomfort LOL yeah kickboxing class - at least the ones I've done - require a lot of energy and I never did them in full makeup and jewelry. It is so silly. For heavens sakes at least make it look realistic!

Yeah of course Jason will tell the truth. I don't know that lying would be helpful even if it were the way his character is. After all, too many people know that he and Carly had feelings for each other - even if IMO it didn't make sense to me at all.

It makes perfect sense to me. In fact, way back before she and Sonny, she slept with Jason, and later had his help with claiming he was Michael's father when he knew he wasn't. She's always had feelings for him, but I'm not sure about Jason. I am not quite sure he is capable of having real feelings. He kind of just goes with the flow.