@grandma r  thanks for posting about the impending addition of Trevor St. John to the cast. For those who don't know Mr. St. John played a recast of Todd Manning and his identical twin brother, Victor Lord on One Life to Live. So here comes another recycled actor from one of the two ABC defunct soaps. Yay!!! she said sarcastically.

Trevor St. John is coming to GH in December according to a credible source 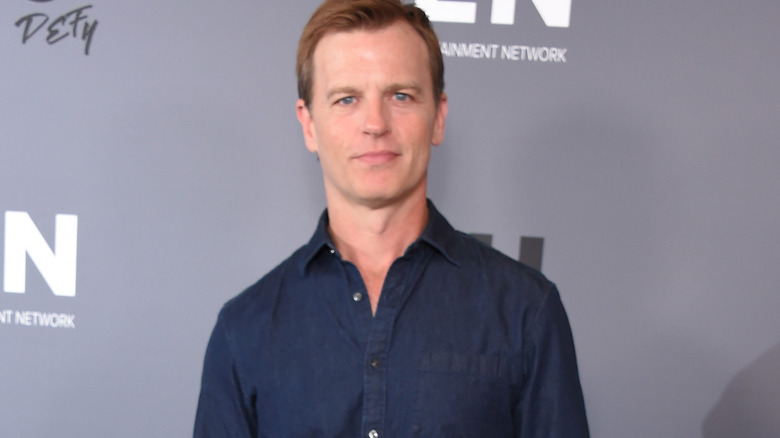 According to soap opera blog Soap Dirt, an unnamed "reliable" source claims that Trevor St. John will be joining the cast of General Hospital in December of this year, shortly before Christmas. In the past, St. John has appeared in recurring roles on TV series...

Given that his casting has yet to be announced through any official channels, the character he will portray upon his supposed arrival is unconfirmed. That said, should Steve Burton leave the series, it's possible that St. John could take over his role and become Jason Quartermaine.

Until St. John is officially a part of "General Hospital," however, his casting remains a rumor. Nevertheless, given the recent departure of Ingo Rademacher and the seemingly imminent loss of Burton, some new blood is likely on the way in one form or another. By all indications, then, it sounds like St. John will indeed join "General Hospital" this December...

Any rumors or spoilers you have are always welcome here. This is not a one-woman show.

“In the End, we will remember not the words of our enemies,
but the silence of our friends.” ~ Dr. M L King Jr.
Report Inappropriate Content
Message 131 of 417 (660 Views)
Reply
6 Hearts
corita
Esteemed Contributor

So Jason and Jax are leaving.  Their leaving will not make me stop watching, but the current story lines might!! I do enjoy Jason's character, though he is quite non-verbal!   Jax can come or go; not crazy about his character! Jax and Jason do have beautiful eyes in common.

Would love to see Gladys leave. Really hate her role. Not

because she is evil - like Nelle was - but because she really is not important to the story.  She is just a gossipy, self- indulgent, unlikable character!  Much like Curtis' aunt!!

Other person that should go is Esme.  She is also an non-essential character.  If they don't show the story con-

nection of her institution internship, she needs to go.

I know we've talked about this subject a lot but what in the world has Maxie been wearing for the last several days?  That sweater(?) is hideous and ill-fitting.  It doesn't even look like she has hands because the sleeves are so long.

Someone, anyone, needs to do something with her.  Her hairstyle isn't bad but the color just washes her out.  Her make-up is too harsh for her and the clothes.  Yikes.  Poor woman.

I honestly don't really care about Jax leaving one bit and I mildly care about Jason.  I was excited for him to come back but he's certainly not been burning up the screen.

I had to laugh about that debacle at the Savoy.  There is a line around the block to get in but only about 20 people inside.  Oy.

And all of them work at GH or hang with GH people. How small is Port Charles, anyway?

I just looked at my DVR.  I have 22 episodes of GH I haven't watched.

I don't want to upgrade the number of hours I can hold on my DVR.

I'm going to have to decide if I want to eliminate all those episodes.

I keep coming here, reading all the good postings and ..... so far I'm not seeing anything that makes me want to watch all or any of them.

That's 22 hours I could use to copy other shows.

I never liked the pairing of Sonny and Nina.  I think I'll just delete them and move on.

I did that with B&B and never missed it.  I've only recently just started (again) DVRing this show.  I watch it periodically.

But I'm sick of Hope whining about her Daddy.  This is a grown woman who ignores everyone's cautious words and continues to plow ahead with what SHE wants; even when she knows he's picked up with crazy Shelia.

@Tique. I'm not familiar with this actor, however, I don't think the GH cast needs any more fillers.  If Jax is out, so be it; back to Australia.   If Steve is out, please, no sorry excuse recast.  Jason, a la Stone Cold, can only be played by Steve.  (They tried a recast before and he didn't work out.)

Wes plays his character more and more like a bad cartoon villian.  The voice and facial expressions remind me of Snidely Whiplash.  All he needs is the twirly mustache.

Honestly, I'd still rather a return to love in the afternoon.   The violence and psychos have been driving the bus for too long.

@Tique. I'm not familiar with this actor, however, I don't think the GH cast needs any more fillers.  If Jax is out, so be it; back to Australia.   If Steve is out, please, no sorry excuse recast.  Jason, a la Stone Cold, can only be played by Steve.  (They tried a recast before and he didn't work out.)

Wes plays his character more and more like a bad cartoon villian.  The voice and facial expressions remind me of Snidely Whiplash.  All he needs is the twirly mustache.

Honestly, I'd still rather a return to love in the afternoon.   The violence and psychos have been driving the bus for too long.

Agree with your post above.  I do, however, remember the actor from One Life To Live.  Dear Victoria...always either making excuses for, bailing out, and/or chastising her neer do well 1/2 brother....but, you and I are on the same page...love in the afternoon sounds well, lovely.  Bye bye to Jax and Jason if that is what TPTB have determined.  No replacements please.

The only story right now that I am interested in is the Jason and Britt on the Island, General Hospital gives us a one day episode a week if we are lucky, how irritating is that?All these other new stories are not interesting,they need to finish a story,in stead they just drag them out,and start new ones,really g.h. this is irritating to your fans.Tucka.

I think that the both actors need a reality check and the roles should be recast. Instead they will start with the stupid storylines... evil twins, long lost brothers, presumed dead, resurrected, amnesiacs etc.

While TPTB stroke the egos of the actors; they insult the intelligence of the viewer. Enough already!

Bring back the days of  🎙 "The role of Jason Morgan /Jasper Jax is now being played by Blah Blah Blah" That might just knock them down a peg or two and teach them a lesson in humility.

I've never left a soap opera due to the departure or recasting  of an actor. I have however, dumped out of one due to poorly written material; explaining a characters abrupt exit.

GH spoilers for Monday reveal shocks, an unexpected visitor, huge drama, and so much more.

Harrison Chase may be stuck on desk duty but that doesn’t mean he’s not still one of the best detectives at the Port Charles Police Department. He knows how to put two and two together and questions Brook Lynn Quartermaine’s honesty. She says they have a good thing, why mess it up? But will she be able to throw him off her and little Louise/Bailey’s trail?

After all, she thought her biggest threat to that secret was Gladys Corbin and her big mouth. Brando Corbin, with Sasha Gilmore in tow, informs his mother it is rude to turn down an invitation. She will be going with them to the Jerome Gallery. It looks like Gladys makes a surprising discovery while there!

Esme Prince is also at Ava Jerome Cassadine's gallery and GH spoilers tease that she stirs up some drama. Nikolas Cassadine may try to keep Ava from flipping out on unwanted guests since this is her big night but Ava tells Nikolas that maybe he can, but she can’t. Will she do something to Esme and possibly Spencer Cassadine too?

Ava’s gallery isn’t the only place for Drama. Over at The Savoy, Curtis Ashford’s world is rocked by a bombshell revelation. Curtis wants to know what the hell Marshall is doing there, after stalking those he cares about for weeks. Could his identity be tied into the revelation — or does this have to do with something else?

Deal With The Devil

Valentin Cassadine tells Anna Devane that he can’t stop his father from making a deal with the devil. But is the Devil in this case the WSB, Port Charles DA department (though why would they have jurisdiction), or Peter August? Robert Scorpio tells someone there is a way to make that happen.

Victor Cassadine receives an unexpected visitor. It’s Scott Baldwin, who asks the man if he wants to walk out of jail free as a bird. You see, Scott can help with that — but he may want some information in exchange about a gal he’s sweet on who they have in common — Dr. Liesl Obrecht!

“In the End, we will remember not the words of our enemies,
but the silence of our friends.” ~ Dr. M L King Jr.
Report Inappropriate Content
Message 140 of 417 (425 Views)
Reply
8 Hearts