Auto-suggest helps you quickly narrow down your search results by suggesting possible matches as you type.
Showing results for
Search instead for
Do you mean
Reply
Topic Options
mysoutherncomfort
Respected Contributor

Stay tuned for Curtis to find out he is actually Trina's father.  Yep, still waiting for that shoe to drop.  Jordan is "hinting" that Portia has a secret about Trina's dad....hopefully it comes along sooner than later.

So, are we going to find out that Auntie forced Marshall to leave his family? There has been a stigma about mental illness and she might have convinced him that it was better for him to go away.

How will Curtis feel about that?

Posting this because it supports a comment I made about GH hiring actors for parts which should be played by younger/older actors. I will quickly add I do like him as Rory but at 32 he should not be linked to Trina. FYI: The current Trina's age IRL is 20. 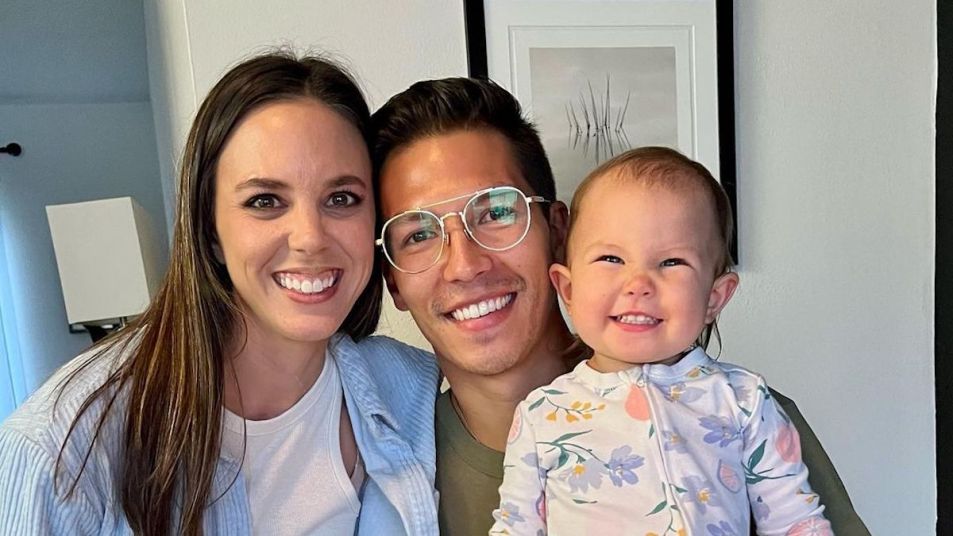 Looks like General Hospital newcomer Michael Blake Kruse really did have the best birthday ever on May 19! At least if the pictures he shared are anything to go by! “Had the perfect birthday celebration thanks to my wife’s planning,” the 32-year-old declared, praising his beautiful wife, Cara, for setting everything up...

Sharing the magic of the movies with his little girl. 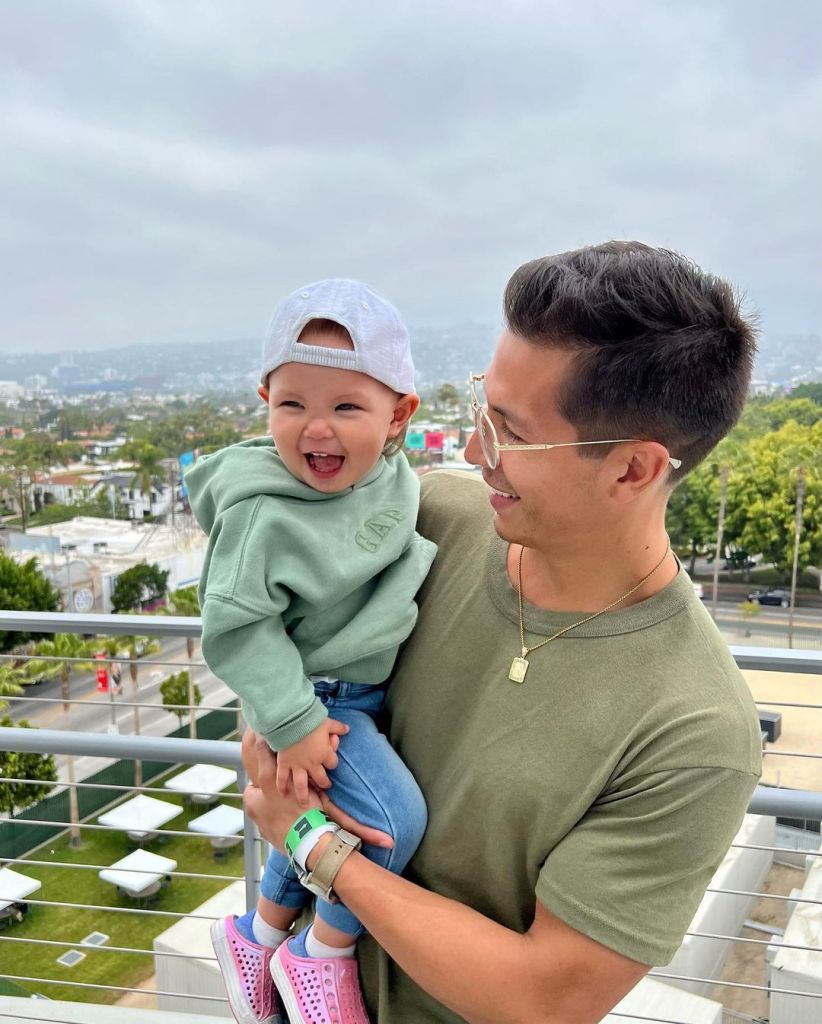 ~~~"They laugh at me because I'm different.
I laugh at them because they're all the same..."~~~
Report Inappropriate Content
Message 223 of 307 (546 Views)
Reply
8 Hearts
grandma r
Respected Contributor

@mysoutherncomfort. Hope your DH is on the mend.  Hugs and prayers continue.

@annabelle. Hope you are healing.  Hugs and prayers to you.

Ninny and Mike are harder to watch because they're just pathetic.  Why bring Linc back?????

Making Felicia spawnie's Mom is quite the stretch.  If the writers do go there, it just proves how diluted they really are.  Timing wise, Ryan was dead and Felicia would have been early 50's.  Just a totally bad s/l that never should have been hatched.

Will Sonny Do The Unthinkable?

There was a time when Marcus Taggert called Jason Morgan ‘Anger Boy,’ but that nickname can now be bestowed upon his nephew, Michael Corinthos, someone with a chip on his shoulder a mile high because his father cheated on his mother for the umpteenth time. This means war. Plus, Nina Reeves did a bad, bad thing, so all must be punished no matter who it affects.

When Sonny shows up in court to testify on Nina’s behalf, Michael is about to blow and even Nina can see this is a bad situation. She tries to tell Sonny that he needs to leave, just as she told him they should take a break, but nobody tells Sonny what to do, especially when he’s almost as angry at Michael as Michael is at him.

With Carly at the court knowing she can change the whole trajectory of the case if she reveals the results of that DNA test, anything can happen.

All About Mental Health

Elizabeth can’t be sure what is wrong with her and fears hurting the people she loves, so she insists on going to a mental health facility to see what is really wrong. This can’t just be sleeping ills, can it? Poor Cameron is horrified by what Liz wants to do, but Laura and Kevin Collins are there by her side.

Over in Brooklyn, Curtis is thrilled when Marshall Ashford wakes up, but he wants to know why he hid his mental health issues. Stella also shows up in Brooklyn and begs the Ashford men to give one another a second chance.

It looks like Gregory Chase will be sticking around Port Charles for a while as he and Alexis Davis spar over The Invader. Does he have any journalism advice for the former lawyer?

Finally, Brook Lynn is desperate for Harrison Chase’s help, especially now that she has heard what her former manager has done to her music. Are they ready for a caper?

~~~"They laugh at me because I'm different.
I laugh at them because they're all the same..."~~~
Report Inappropriate Content
Message 225 of 307 (517 Views)
Reply
6 Hearts
Tique
Honored Contributor

This episode will be repeated next Monday, Memorial Day. 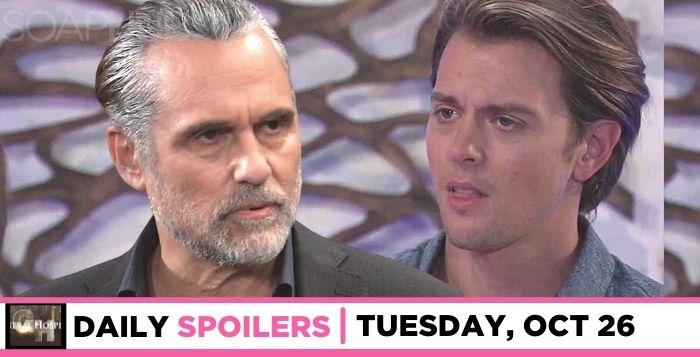 GH spoilers for Tuesday reveal a concern, a consult, confrontation, and so much more.

Sonny Corinthos and Carly Corinthos are shocked and concerned about Michael Corinthos when they realize he’s the reason Nina Reeves was arrested. It’s not like Michael to be vengeful. But Michael is the one concerned as he asks Sonny if he has a problem with his having reached out to D.A. Sheridan. After all, he learned all about revenge at Sonny’s knee.

Willow Tait is also concerned about this side of Michael that she’s now seeing and who better to vent to about it than the woman whose heart she helped break when she and Michael fell in love! Yes, Willow vents to Sasha Gilmore — after all, she’s pregnant and happy. Sasha tells her to be honest — it’s the best way to work this out. Or at least, that’s what she hears.

GH spoilers tease that Brook Lynn Quartermaine confronts Gladys Corbin — does she already know about the secret that was spilled that Gladys recorded? Could be because it looks like BLQ talks with Harrison Chase and tells him that she’s basically declared war on her. This could finally get this storyline moving!

BLQ’s father, Ned Quartermaine goes to see Austin Gatlin-Holt and tells him it’s for an important reason that he’s turned to him for advice. Will Austin be so willing to help since Brook Lynn is trying to ruin him? She has certainly made his life a living hell since he reached out to his extended family. But will Austin put that aside to help Leo?

Elizabeth Webber Baldwin and Hamilton Finn are hanging out and playing with Violet. But Liz tells Finn that she wishes she had better answers for her questions. Is Violet asking about how close her daddy and her aunt are getting — or is she still wondering where in the world her mommy is these days?

Spencer Cassadine ponders his prospects with Esme Prince since he needs to get a job now that he’s living with Kevin Collins. He must be considering how to get out of it because Esme asks him if he thinks he has a choice. Cameron Webber points out what happened is kind of deserved. He’s not wrong.

~~~"They laugh at me because I'm different.
I laugh at them because they're all the same..."~~~
Report Inappropriate Content
Message 226 of 307 (512 Views)
Reply
7 Hearts
mysoutherncomfort
Respected Contributor

Today's episode:  Still waiting for the drama in the courtroom.  Waiting, wishing and hoping.

I would like to swing to Gregory/Alexis:  So that's her next man?  He will write op eds for The Invader? Alexis mentioned Jackie Templeton (in not a favorable light) and heavens no, I don't want her back.  Please with sprinkles correct me if I am wrong in that Jackie wanted to get out of her contract with The Invader (when run by Peter), but it was shown to be iron clad.  She had to do what he directed as her boss.  And so where is Jackie these days?  Is she still under contract with The Invader?  Is it now null and void and she's doing freelance once again?  Ooopppsie, did the writers drop the ball again?

Oh Happy Days with Marshall/Curtis/TJ and Aunt Stella...and where is Molly?  Is she traisping around Brooklyn looking for bargains?  Back in PC?  Pssst, writers, did you forget that Molly was with TJ in Brooklyn?

Liz at Shadybrook:  Enter Ryan.  Enter Spawnette.  Enter Liz.  Gosh darn, but I wish they would enter Heather.  I'll buy and deliver the first round of Kelly's BLT's.  Guess Liz won't be charged with arson; starting the fire at Franco's studio since she didn't remember doing it.  Hey, what the heck.  Sorry, not so if I owned the building.  Ok, Ok, it's a soap...I get it.

Why isn't Ryan in a mazimum security cell, given his crimes? Please don't let him anywhere near Elizabeth. She doesn't deserve that, despite what some of you think.

Wipe that smug look off your face, Carly. Though I can't stand Brad, he was spot on with what he said to her. She had no reason to be outraged after what she did to pass Michael off as Jason's son.  And then there's Sonny who murdered AJ and never really had to pay for that crime, AND Michael forgave him and took back the Corinthos name instead of Quartermain which is he real paternal name. Yet, sleeping with Nina is a bridge too far????

The sleazeball Linc need not to have returned. I though Ned hired a top lawyer to extricate Brookie from that creep.

And Miss Willow isn't the shy shrinking violet she has pretended to be, now is she? Between her and her lover Michael, they make quite the aggressive pair.

And Stella, quite playing games with Curtis. I am sick of her. Come to think of it, I am sick of Marshall as well. He and Stella should drift off in the sunset together, never to return.

Give me more Chase, more Robert, more Anna, more Valentine etc. And Sasha...such a good actress with an important story to tell.

On the West Coast most of today's episode was pre empted because het another wacko with a weapon opened fire on innocents. I assume it happened after the east coast had already aired the episode. Guess I'll see if I can get it On Demand.

Just why would Marshall's family, including his doc grandson, suggest the hospital contact GH for any medical records they might have on Marshall. And, why wouldn't they share the found rx information with the emergency room.

GH writers continue to astound me with writing like this and other things such as no one ever suggesting that Ninny provide dna proof that Nelle was her daughter. I find it hard to believe that I could legally claim someone as my daughter by saying I have the other half of a necklace that was found on the ground near where she [perhaps] died.