Auto-suggest helps you quickly narrow down your search results by suggesting possible matches as you type.
Showing results for
Search instead for
Do you mean
Reply
Topic Options
Highlighted
corita
Esteemed Contributor

I agree!!  What horrible singing!!  And so over dramatic...as usual!!  I understand that they are supposed to be 'amateurs' singing in the show.  But don't let someone sing if they can't carry a tune!!  Yikes!!!

They went to the cabin, dorr was ajar, power was cut off.  Of course, they went in anyway. Curtis was looking around and found the woman dead on the floor from a stab wound.  Laura stepped outside to see if she could get cell service.  Ryan knocked Curtis out from behind.  Laura came in and saw Curtis.  She turned around and saw Ryan (we didn't actually see him).  Next scene for them had them tied up back to back.

Amazing what Ryan could do with one hand!!!

Thanks, GrandmaR. I saw it all except for Laura finding Curtis and the tie up scene.

Is Robert still with Holly?  I thought he told Laura that.

Is Robert still with Holly?  I thought he told Laura that.

He told Laura he and Holly were not together @BeckiWV.

The fashions were better this year than last year. Sasha and Willow have really brought the pretty. Cameron was sweet but nothing, nothing was more funny than Ava. Cringe worthy, train wreck and hilarious!

I think Willow and Chase make a beautiful couple. Just loved that he brought her up on stage.  Joss looked so nice with her hair like that too. Glad she went. We will probably hear her song today.  That is a sad story. I just want Sam to get away from that Shiloh guy and not get hurt. I was surprised at Kristina as I thought she might have been acting a part to get out of the house and go back. So glad that was not the case.

What a stunning gown WIllow has on - gorgeous color on her, Josh's layers in white, yellow & rose golds and her earrings match perfectly. Lovely women for sure.

@cowboy sam  Cam sang a song that HE wrote...he told Joss that when they talked backstage. Maybe Joss will end up singing the song that she and Oscar wrote together. 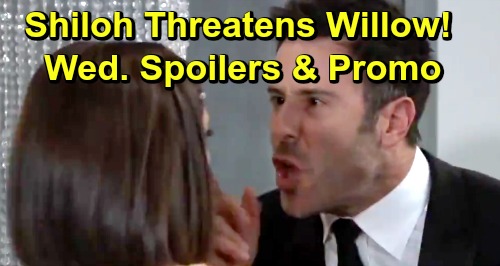 Today's spoilers tease that Carly Corinthos will worry about Josslyn Jacks. During a chat with Cameron Webber and Sonny Corinthos, Carly will reflect on Joss’ tough task. Oscar Nero Quartermaine’s message pushed Josslyn to perform without him, so Carly will fear this could end in disaster.

It looks like Josslyn will fear that as well. As the big moment approaches, Joss will tell Lucy Coe that she’s sorry. She just won’t think she can get up there and sing, but she’ll get a pep talk before she gives up completely. Jasper “Jax” Jacks and Cameron may offer encouragement along with other loved ones. Joss will ultimately gather the courage she needs to go on.

Nearby, Felicia Scorpio  and Mac Scorpio will have some shocking news to share. After they get updates on Ryan Chamberlain, Felicia will warn Lulu Falconeri to sit down. Since Lulu was attacked by Ryan, Felicia will want her to brace for Ryan’s upcoming appearance. They’ll expect him in Port Charles soon enough. Of course, they don’t know Ryan’s already arrived and has knocked out Dr. Kevin Collins.

Over with Ava Jerome, she’ll talk to Harrison Chase  about the chaos that’s brewing. Ava will think they all know where Ryan’s going – and that’s probably straight to her. She’ll feel confident that Ryan will seek her out in the near future.

Other General Hospital spoilers say Scott Baldwin will have a frightening encounter. He’ll turn to face Ryan and call out his name in shock. Back in the ballroom, Nina Reeves will gripe about Willow Tait She’ll tell Michael Corinthos that his little friend has quite a mouth on her. The pot is clearly calling the kettle black here!

As for Willow, she’ll face a furious Shiloh Archer’s terrifying wrath. Shiloh will get in Willow’s face and bark that she shouldn’t lie to him. Shiloh will demand answers about his child, but Michael will save the day. He’ll show up just in time to manhandle Shiloh and throw him to the floor. Nevertheless, that won’t stop Shiloh from figuring out Willow indeed had his kid. Lucas Jones will also put the puzzle together on Thursday, so he’ll be ready to rip into Brad Cooper over the birth mom deception. This mess is getting messier by the second.

Finally, GH fans can expect some trouble for Sam. She’ll leave the party with a seething Shiloh, so that can’t be good. Shiloh may be too fed up to return home for Sam’s initiation. They could wind up somewhere else, which would leave Jason Morgan scrambling to track Sam down and protect her.

General Hospital spoilers say the excitement’s about to rev up in PC!

Today's the last day of the Nurse's Ball. Enjoy!

@cowboy sam  Cam sang a song that HE wrote...he told Joss that when they talked backstage. Maybe Joss will end up singing the song that she and Oscar wrote together.

Yes and let's go a bit further with that - a song Cam wrote with Joss in mind. She was his inspiration. It was nicely done - the singing, the words, the slideshow.