Auto-suggest helps you quickly narrow down your search results by suggesting possible matches as you type.
Showing results for
Search instead for
Do you mean
Reply
Topic Options
KBEANS
Respected Contributor

GH Spoilers: Elizabeth Decides Finn's The One Hurting Her

GH spoilers for Monday reveal confessions, truth-telling, decision-making, and so much more.

Liz Advocates For Herself

It’s been more than a week (in real-time) since Elizabeth Webber checked herself into Shadybrook and on Monday we get to see how she is doing. First, Laura pays her a visit and that seems to go well, but when Finn arrives, Elizabeth is not so sure if she wants to see him. This has gone on for too long already and has surpassed being ridiculous.

Of course, Finn insists on seeing Elizabeth, as he seems a bit obsessed with her and has declared himself her protector. Imagine his shock when Elizabeth tells him that visiting her like this is hurting her more than he realizes. Will Finn understand what he is doing by letting Elizabeth explain herself?

Curtis brings Marshall Ashford back to Port Charles, where Stella Henry apologizes for any trouble she has caused and Portia Robinson wonders what Curtis learned in Brooklyn. But it’s now time for Marshall to tell his whole truth and he finally reveals what kept him away from his family all these years. Yawn!!!

Willow Tait also makes a family choice. After everything she went through with Nina Reeves in court, she tells Carly that she is not going to search for her real parents. She just doesn’t want to know. Isn’t that just blind luck for Carly and her little envelope?

It’s all about the new horses in the Quartermaine stables. Sam wants to get Dante a job there, but it’s also where Leo Quartermaine has his own new horse. As Ned and Olivia Quartermaine look on lovingly, Valentin Cassadine stops by for ELQ talk. He’s ready to make Ned an offer.

Elsewhere, Drew and Michael Corinthos also discuss ELQ and they find they might be in for a rude awakening.

@Coquille Always a pleasure to hear from you.  DH is progressing well and appreciate your asking.  Dear One, please take care of yourself and I will pray that your brother rises to the occasion.

@cowboy sam  Soooo glad he will be getting his meds. For future reference, when meds are needed for anyone, always call the pharmaceutical company. If they cant arrange to get the drug to you, then they will steer you in the direction of foundations that will arrange for you to get the drugs for free. Depending  on the diagnosis and diagnosis codes, that you can get from your doctor. He will tell you the codes you need for the proper diagnosis.  There are several Foundations out there. I'm not going to name them because they will probably get poofed.

I managed a doctors office for 18 yrs, so I know about these things.  I'm sure the meds will work and next time the bloods will be better, please God! I will pray for Curt, you and your entire family.

Happiness is not a destination, it is a way of life.
Report Inappropriate Content
Message 94 of 381 (1,441 Views)
Reply
8 Hearts
Coquille
Respected Contributor

@BeckiWV  That's greeeeeat! So happy for you! Enjoy every minute with the kids and family!😘

Happiness is not a destination, it is a way of life.
Report Inappropriate Content
Message 95 of 381 (1,440 Views)
Reply
5 Hearts
Coquille
Respected Contributor

Glad DH is on his way.

Let's keep this progress and run going for your DH and everyone on this thread!😘❤️

Happiness is not a destination, it is a way of life.
Report Inappropriate Content
Message 96 of 381 (1,434 Views)
Reply
6 Hearts
Coquille
Respected Contributor

@KBEANS 😆😆 Thanks for the laugh!

Happiness is not a destination, it is a way of life.
Report Inappropriate Content
Message 97 of 381 (1,424 Views)
Reply
8 Hearts
drizzellla
Esteemed Contributor

That is a good one!

When my husband called his parents to tell them that our son was born - The first words out of her mouth was "I hope you don't expect us to babysit him."

One time we were stuck and asked my in laws to babysit. They put the Tupperware containers of my son's food directly on the stove and melted the Tupperware. My son was about 6 months old. That was the first  and last time they ever were alone with him.

This woman was a nurse and had raised 5 children. She wasn't new to the kitchen or babies. In fact she babysat her daughter's 2 girls several times a week. 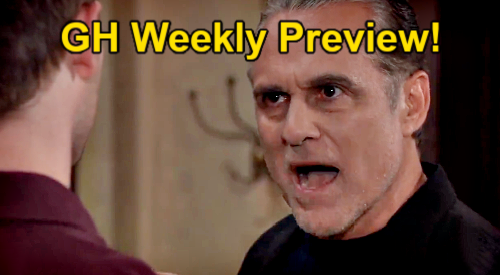 General Hospital spoilers reveal the preview for the week of June 6 shows explosive tempers and unraveling schemes. Ava demands the truth. Esme has a tense meeting with Ryan. Plus, Sonny threatens to kill Dex.

Spoilers reveal that during the week of June 6, Ava confronts Spencer Cassadine. Ava demands to know the truth, which is regarding his feelings for Trina Robinson.

Ava seems to suspect that there’s more to Spencer putting up with Esme. Ava straight-up orders Spencer to tell her what kind of game he’s playing.

Spencer is still trying to work his scheme to oust Esme and clear Trina’s name. However, time is running out. Unknown to both Ava and Spencer, Esme’s manipulative web is getting even more tangled and scandalous. Could Spencer finally tell Ava what he’s trying to do?

The only complication is that if Spencer tells Ava the truth, will she give Nikolas a heads up? That could be dangerous now that Esme has control due to their secret.

Meanwhile, Trina looks serious as she meets with Rory and Josslyn at the gallery.

The weekly preview also teases some schemes will unravel. However, Spencer’s good-intentioned plan isn’t the only one that could get discovered. Esme looks quite unnerved in one scene.

Then, the camera zooms to Ryan, who could have another risky demand for Esme.

Plus, each time they meet, the villains risk someone catching on. Could Ryan and Esme’s plans finally be found out?

Spoilers for the week of June 6 reveal that Michael is determined to punish Sonny. Dante will call out Michael for trying to humiliate Sonny. However, judging by the look on Michael’s face, he has no intention of backing down.

The weekly preview also shows a scene between Sonny and Dex. Sonny just hired Dex but not everyone in Port Charles is convinced he’s who he appears. Sonny has an explosive conversation with his new hire.

In the preview, Sonny screams that if he touches his kids, then he will kill Dex himself.