Auto-suggest helps you quickly narrow down your search results by suggesting possible matches as you type.
Showing results for
Search instead for
Do you mean
Reply
Topic Options
BeckiWV
Respected Contributor

@BeckiWV  Agree, the character and the actor are both among the best this show's got and hope we see a lot more of her than has been the case.

I am going to laugh my butt off when Dex gets sucked in and double crosses Mikey.

I am also going to double down on my popcorn when it comes out that Esme is Kiki’s sister and Ava and Ryan actually did spawn together. Ava has been a mystery woman before and Ryan loves a good game. 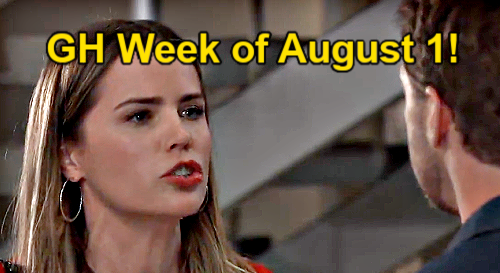 General  Hospital spoilers for the week of August 1-5 tease that Sonny Corinthos will deliver a new assignment while Sasha Gilmore is on the verge of hitting rock bottom. Elizabeth Baldwin will also face a memory trigger, so let’s talk about what’s in store.

For starters, Trina Robinson will finally take the stand and offer her side of the story in court. Diane Jenkins Miller will use her best strategy and work hard to show Trina is an innocent woman, but she’ll be facing quite a battle.

Curtis Ashford will keep working to get info that could clear Trina, but Esme Prince will be busy having a major faceoff with Ava Jerome Cassadine.

It looks like Ava will know the truth about Esme and Nikolas Cassadine’s hookup by then, so they’ll have a confrontation that ultimately turns physical.

Nikolas will corner Spencer Cassadine and perhaps try to explain his actions, but Spencer will surely be hopping mad. Although Spencer’s reunion with Esme was a ruse, Nikolas didn’t know that and had no business sleeping with his son’s love interest anyway. This was still a huge betrayal that Nikolas deserves to be ripped to shreds over.

Nikolas will eventually try to explain himself to Ava as well, but there’s no way she can forgive him for sleeping with the enemy. Ava will no doubt want to move forward with the divorce and make sure it sticks this time.

Jordan Ashford will eventually take someone into custody and put this person through a grilling session. That could be Esme unless Ava does something drastic like throw her off the parapet! In that case, Ava herself could land in trouble with the law.

At GH, Hamilton Finn will offer support during Liz’s first day back on the job. However, Elizabeth has a big surprise headed her way – and it looks like it’ll involve something that triggers a forgotten memory. Liz may finally start to uncover some trauma of the past, which Kevin Collins thinks would be beneficial to her recovery.

Over with Willow Tait, she’ll face some difficult test results and sit down with her medical team regarding her next steps. Terry Randolph will help Britt Westbourne explain what Willow is up against, so Terry’s involvement points to a cancer crisis.

While Michael Corinthos is on the phone plotting, Sam McCall will appear. There’s the potential for Sam to overhear Michael scheming against Sonny, so we’ll see how it all plays out. Regardless, Sam will turn to Damian Spinelli for help with a case later. Spinelli will take a break from all the Society Setups drama while Britt gets irritated with a persistent Cody Bell.

At the Metro Court Gardens, Nina Reeves will bump into Sasha and notice that she seems on edge. Sasha’s intense grief and drug problem will continue to make a mess of her life, so her job as the face of Deception could be on the line. There’ll indeed be some news that Maxie Jones, Lucy Coe, and Brook Lynn Quartermaine meet to discuss, so we’ll see if that’s regarding Sasha and her downward spiral.

Brando Corbin will turn to Sonny for advice after Sasha’s latest outburst. As Sasha pushes Brando away and refuses the help she needs, Brando won’t know what to do and will need Sonny’s guidance.

Sonny will also have a new assignment for Dex Heller, so Dex will have another chance to prove himself and potentially become the new Jason Morgan. Since Michael wants his plant to become part of Sonny’s inner circle, he’ll be pleased over Dex’s progress.

At the Metro Court, there’ll be some police drama after a shocking altercation.

Dante will also mull over his future at the PCPD and have a significant conversation with Jordan about it.

Finally, Gregory Chase and Alexis Davis will have a little meeting – one that’ll reveal who won their latest bet regarding the content at The Invader. No matter who comes out on top, Alexis and Gregory seem to be headed in a romantic direction.

I'm finding that I like the Sasha character less and less.  Conversely, I'm liking Brando more and that includes his mom, too.

Right there with you. I didn't like Sasha when I first started watching, then she grew on me, now I'm finding her and this whole storyline tedious, and really, it's all been done before and been done better. Brando's essentially a good guy, I think, and Gladys has grown on me. She's not nearly the wild hair she used to be.

Yes, Gladys has really shown that she has empathy for her daughter in law and that she is capable of putting others before her own selfish interests. It may not last, but it's there. The Sasha storyline is tragic since she almost died of the overdose Cyrus gave her. The actress is stunningly beautiful, and it would be nice if she were given a compelling story line that no longer involves drugs.

So now the writers are going to drag this whole Trina thing out even longer. WHY, when Spencer was back on the stand, didn't he reveal that he knew Esme went back to the cabin days later as well as why wasn't the alone time she had at the cabin that night pushed even further. The prosecuting attorney certainly would have done that for her client. That's what just drives me crazy about this Soap.

@stevieb   My thoughts exactly.  Not enjoying the way this storyline is playing out.  Hope it ends soon one way or another.

I would give everything I own just to have you back again.......David Gates of Bread
Report Inappropriate Content
Message 338 of 352 (272 Views)
Reply
4 Hearts
cowboy sam
Honored Contributor

And once again its back to drugs again for Sasha

When is Brando going to put 2 +2 for Dex and Mikey-= tell Sonny!

Loved Ava going head to head with spawnie and not backing down. Throw her to the fish..since no gators there..lol 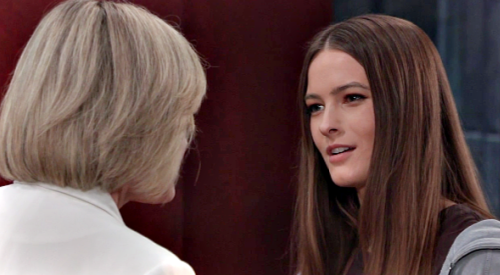 General Hospital Spoilers tease that Esme Prince may fall to her presumed death, so Nikolas Cassadine may come home too late to stop Ava Jerome Cassadine’svengeful attack. Although she wasn’t serious at the time, Ava has mentioned the idea of throwing Esme off the parapet before.

In May, Ava acted like she was being remarkably patient by not taking that step. Flash-forward to now and Ava has plenty of reasons to hurl Esme over the edge. Ava just delivered a death threat that will escalate on Monday, August 1.

Since Esme obviously isn’t going to throw her freedom away and help Trina Robinson, Ava may try to end her life. That’s especially true since Ava may snatch back the letter Esme’s hiding and realize she’s supposedly Ryan Chamberlain’s daughter.

This confrontation will get loud and physical, so Nikolas will get a call from Wyndemere’s staff while he’s at the courthouse. GH spoilers say Nikolas will race home, but he’ll soon see that he’s too late to play referee. Ava’s showdown with Esme will have deadly consequences and keep the drama going for quite some time.

Of course, we should point out this is the last mention of Esme anywhere in spoilers so far. We’ve got this faceoff spiraling out of control for Esme and that’s it. Ava is still in future spoilers, so it all adds up to Esme seemingly biting the dust. If there are deadly consequences and Nik is too late to make a difference, that surely means Esme will appear to be a goner.

The most logical option is for Ava to throw Esme off the parapet. A presumed death makes the most sense here because we highly doubt that Esme will be gone for good. Despite the bogus tale Ryan offered, all signs point to Felicia and Mac Scorpio being Esme’s true parents.

The show has gone to a great deal of trouble to set that storyline up and probably won’t drop it now. Ms. Jones when did you start watching this show? It must have been recent - maybe last month or the month before. It looks like GH writers will simply let Esme vanish into the water for a while and then pop up down the road – like many other presumed characters before her.

General Hospital spoilers say Esme seems poised to face a presumed death and return when the time is right.