Auto-suggest helps you quickly narrow down your search results by suggesting possible matches as you type.
Showing results for
Search instead for
Do you mean
Reply
Topic Options
Highlighted
Tique
Esteemed Contributor 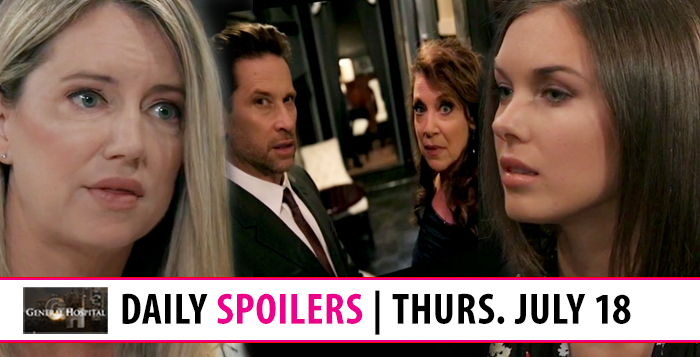 Spoilers for today reveal another day with Liesl taking center stage just by laying in a hospital bed. She knows the secrets she holds, but even she may not realize the fallout that could come.

Nina realizes that her big mouth is what tipped Shiloh off to the fact that Willow had his baby. Does she now understand Willow gave up her baby to keep him away from a sexual assaulting sex cult leader? She feels terribly guilty about it either way, but this whole story makes Liesl realize the sex cult is connected to that baby she delivered on the side of the road a whole year ago. She hints to Nina she may not have told Shiloh the “truth” after all. She also hinted to Nina that she could screw with her whole life, but Nina just can’t imagine that it would have anything to do with Sasha.

She’d be thrilled to learn Sasha wants to stay in town, but Valentin is NOT thrilled to learn she wants to move out of Wyndemere. Now he can’t keep as close an eye on her as he’d like, but Sasha assures him she will keep her mouth shut because she doesn’t want to hurt Nina. We’re pretty sure she also doesn’t want Michael learning she’s a fraud.

Who knew? I certainly didn't think Sasha still lived at Wyndemere. She seems to have a permanent room at the Metro Court for trysts with Michael. Must be his room which makes sense since his mom is co-owner of the place.

Meanwhile, Franco wonders who could be in that picture behind him and Liesl. Could she have been pushed and nearly murdered as she claims?

Poor Willow is happy as can be now and can’t wait to tell Chase her news. She finds him in the park, but also say Nina tries to apologize. Does she track down Willow?

Valentin also has a meeting with Curtis and wants as much info as he can get on Jax — now. Little does Valentin know Curtis is currently double-dealing everyone. Curtis has an emotional day as well as spoilers tell is that he opens up about his fears. This is surprising.

Don't like what Curtis is doing. Hope he decides to end it soon before he is caught.

Jason also gets a surprise… from Sam!

Maybe she picked up Scout and Danny from the Quartermaines so the two of them can spend some time with them. Nah, that's not it.

If they bring back Morgan I imagine it would be with a new actor.  The original seems to be doing pretty well in prime time.  Better than the others who have left for bigger and better things.

@wsmom   hope you're right. I've had the show on while doing other things and I'm also keeping up with the ratings. Call it research because I want the show to succeed. So far the ratings aren't that good and it hasn't been renewed. Thinking positively here - but it hasn't been cancelled. Find it interesting on his new show Bryan Craig plays an entitled brat who expects Mommy [step mom in this case] and Daddy to clean up all his mistakes. Sound familiar?

I always liked Tyler Christopher as Nikolas, and would love to see him come back. But only if he personally is in a place where this would be good for him. Jerry Jacks could come back if the original actor played that part, too. I always thought he had good chemistry with Ingo Rademacher.

I hated when they recast Nikolas before! Can't remember the actor's name, but he just didn't fit the dark, brooding personality of the Cassadine prince as played by TC. Fans of General Hospital star Nancy Lee Grahn, who also follow the beloved actress on Twitter, knew that she was going through a hard time in her personal life and on Wednesday night, the news people were dreading for her was shared by the Emmy-winning actress.

“‘They tell me I get a golden rocket ticket. I’m ready, but I can’t take you with me.’ – my mom. And off she went. I won the jackpot of moms. I can assure you, she is not resting in peace but thriving in utter well-deserved bliss. I am thrilled & beyond grateful for her.”

Barbara Grahn passed away at the age of 90, leaving behind an incredible legacy to be carried on by her daughter Nancy, her daughter Kate, Nancy’s two sisters and their families. Fans had learned about the turn Grahn’s mom had taken from the actress herself from a tweet on July 10.

“My mom’s hospice caretaker is an earth angel. Her name is Nita & she hasn’t seen her children in 2 yrs because of _______. I love her beyond measure and hate him beyond all imagination. She promised me goodness will win. I choose to believe her.”

I removed the name because I don't want the Mods to delete the post; they will deem it political.

Sorry for the sad news about Nancy's Mom.  I know it sucks.

I may not agree with what you say, but I will defend, til death, your right to say it
Report Inappropriate Content
Message 315 of 543 (514 Views)
Reply
4 Hearts
Highlighted
grandma r
Respected Contributor

My heartfelt sympathy to Nancy and her family.  May Barbara rest in peace.

I am not sure if this has already been said here, I did not go back and read for it.  I am hoping that Trina is the here-to-unknown-daughter of Curtis!  That would put her right in the middle of the GH family tree, I also hope she and Cam end up together.  I really like the actress that plays her.  I do not recall any mention of her family prior to now.

edited to add:  And if Trina's Mom pops up as an ex of Curtis, that could be interesting for the Jordan/Curtis marriage.

I may not agree with what you say, but I will defend, til death, your right to say it
Report Inappropriate Content
Message 317 of 543 (483 Views)
Reply
4 Hearts
Highlighted
cowboy sam
Honored Contributor

if they do bring back Nikolas...i also hope it is Tyler....i am willing to give him another chance to play Nik

ty once again for your daily Spoilers/daily briefings on our GH show. Many of us watching General Hospital this week fully expected Ava’s psychic not to be able to contact Nikolas Cassadine and gave a sigh of relief when she couldn’t — because in our heart of hearts, no one believes he’s really dead. But does that mean the character is making a comeback — with Tyler Christopher in the role?

That’s the question that has had Soap Twitter buzzing like crazy. After all, the actor is no longer under contract to Days of Our Lives, where he was playing Stefan O. DiMera, so that means he might be available to resume the role of Laura’s oldest son.

Well, the rumors made it all the way to the actor, who no longer lives in Los Angeles and has set up a new business for himself. Christopher has always made it clear that he adores his fans, so he answered the question as plainly as he could by posting his full response to his followers on Twitter.

“You are all very sweet to be so loyaI as you always are. I know they are talking about Nikolas as of late. I’ve always said I would never close that door from my side. I just want to thank you all for always rooting for me and the character. I grew up with him as many of u have.”

So there you go! Either the actor is playing it very cool so as not to tip off his return or he hasn’t been approached, but is willing to return if things can be worked out. Obviously, we are all hoping we see him in Port Charles again. Guess we’ll have to stay tuned to find out.

Today was somewhat boring....except for Valentin and Sasha's conversation.  Liesel will hold on to her 'knowledge' about the baby and about Sasha until it is to her advantage to share that info.

Certainly was an 'afternoon delight' kind of a show.....